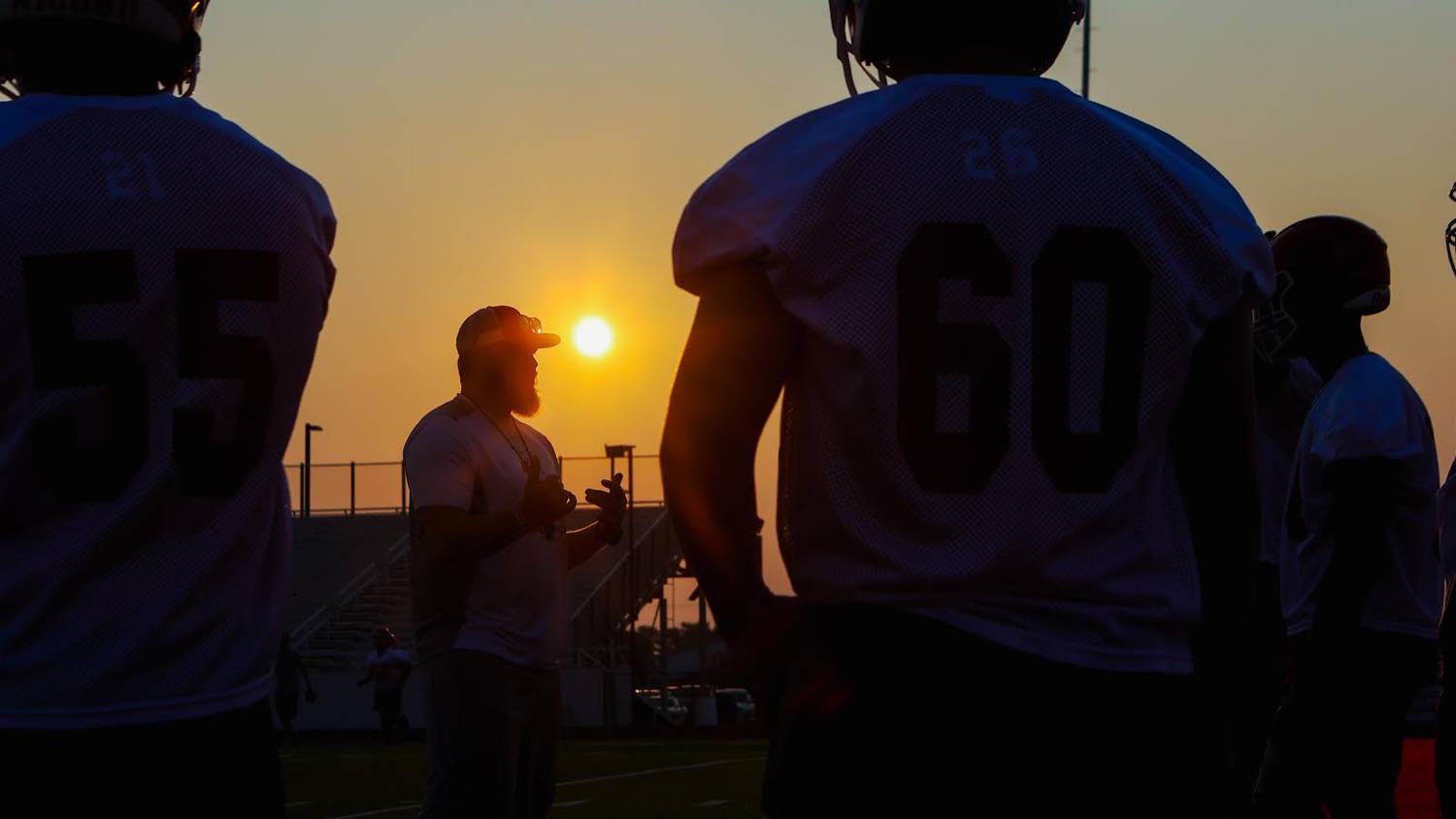 And this one should a whole lotta fun.

The Rock is better than most people think,

And Hereford under new coach Naron won’t stink. The Longhorns passing game is legit no doubt,

The Irish usher in a new era under first-year head coach Jeff Caffey. Caffey will make a great impression in his home debut. … Shamrock 27, Crosbyton 17

Coach John Stanaland heads home to compete in the Jayton Gridiron Classic. This time his Patriots will kick off the event against an Ira team that brings back every starter on both sides of the ball after a tough 8-3 finish. … Ira 68, Valley 54

The Tigers were playing for a state championship just two years ago, but have some building to do to get back to form. This game should be a good building block. … McLean 66, San Jacinto 32

The Mustangs are primed for another good run as they start the season off with a bang. … Wildorado 49, Darrouzett 14

The Owls picked up the win in last seasons matchup on the road, and I think we are starting to see some consistency. … Hedley 51, Chillicothe 41

The Warriors will have trouble trying to control Paducah’s speed, but I think the dragons get slayed. … Miami 63, Paducah 57

That means Amarillo High won’t go on a scoring spree.

This is the Sandies longest road trip of the year,

Playing on a palace of a field at WT adds a new tier.

AHS has senior leadership galore in Erik and Brock,

Lookie, lookie here at what we have on opening night,

A Canyon ISD rivalry with so much new insight.

A gorgeous renovated stadium that few are better,

A new head Coach Winfrey in Canyon, a real go-getter.

This one will come down to first-game mistakes,

The hype around the Tascosa Rebs is the real deal,

The Rebs dominating 6A comp is expecting a bunch,

So let’s slow the roll and not to be out to lunch.

With that said, Tascosa’s defense is a Red Swarm,

This is a matchup between two new coaches, as PD alum Eric Mims takes the reins of the Dons against Seminole’s Greg Poynor, who heads south after a successful tenure at Pampa. Both teams will test the other, but Palo Duro will go home on the right foot. … Palo Duro 28, Seminole 21

After combining for only three wins between them last season, these two programs are eager to build some momentum from the start this season. The Bulldogs will have the home crowd behind them, so give them the slight edge. … Borger 23, Lubbock High 20

This is one of the more intriguing matchups of week one in an interclass clash between contenders Dumas in 4A and Rider in 5A. With eight starters returning offensively, Dumas can put up points, and that will help the Demons win a shootout. … Dumas 31, Rider 30

Former Lubbock Estacado defensive coordinator Cody Robinson replaces Poynor at Pampa and inherits some solid talent on both sides of the football. It’s a long road trip, and out of state at that, but Robinson will bring his first win back home. … Pampa 26, Elk City 13

Expect a hard hitting battle between two physical football teams trying to get a positive leg up to start the year. … Perryton 23, Dalhart 16

This game didn’t bode well a year ago for the Falcons or Josh Reynolds making his head coaching debut. Bushland is banking on making this matchup up with powerful Brock much more competitive. … Brock 28, Bushland 14

Former Bushland coach Jimmy Thomas is back, and ready to lead Littlefield into a new era. The same could be said for Bobcats first-year coach Johnny Nino, who comes back to his hometown after a lengthy stint as defensive coordinator in Clarendon. … Littlefield 33, Dimmitt 12

The mighty Chieftains are back with something to prove and they have the skill players like Jacob Bautista to back it up. … Friona 35, Brownfield 20

A lot of eyes will be on the Longhorns who are have key weapons at the skill positions, and size in the trenches. … Vega 29, Highland Park 8

The Mules made strides under coach Jason Richards a year ago. This will be a tough matchup for Muleshoe, but expect improvement to grow throughout the year. … Sundown 21, Muleshoe 7

If the Wildcats get the run game going early the Eagles could be in for a rough one. … River Road 26, Roosevelt 18

This is a game of the night contender without question. Two years ago the Elks laid a beating on the Lynx, only to see Spearman return the favor in last seasons opener. So what will this one hold? Expect a closer outcome. … Spearman 30, Stratford 21

It should be a successful debut for new Mustang head coach Matt Hoover. … Wheeler 34, Booker 12

Is this the year that the Roughriders break a four year winning drought. Boys Ranch is due, but the Mustangs are a talented team. … Bovina 38, Boys Ranch 20

Look out for the Broncos and Division I prospect Jmaury Davis this season. Davis is one of the top two-way players in the area. … Clarendon 27, Seymour 12

For years now the Steers have put together a very sound program. Watch for sophomore Corey Stancell to keep the winning ways going in 2021. … Farwell 21, Ralls 14

The Greyhounds didn’t lose much off a very young team a year ago. Coach Lee Brandon’s team is now a year older, and a lot more dangerous. … Gruver 35, Texhoma 14

The Bobcats return a plethora of talent in QB Collin Bishop and WR Lamont Nickelberry. Panhandle has a standout of its own in Landyn Hack, but will that be enough. … Childress 38, Panhandle 21

Bobcats coach Wes Boatman did a tremendous job in year one. He can only hope year two is that much better. Look for Sunray to be 1-0 at the end of the night. … Sunray 31, S-Fritch 16

There is a buzz around the Hornets under second-year coach Steven Coursey. How will that hype translate when Tulia travels to beautiful Tyer Stadium. … Tulia 19, Floydada 13

Duncan is four times the size of Wellington as a school. However, this is a Skyrocket team with massive expectations. … Wellington 27, Duncan 26

The Swifts are in the middle of an identity crisis, but this game should clear up some of the lingering questions from last season. …Nazareth 53, Claude 24

One of the biggest games of the week. Two of the perennial names of Six-man in recent years go head-to-head. I like what Happy brings to the table in this one. … Happy 52, Groom 44

The Bulldogs will have another outstanding season, and it starts with a win against the Owls. … Anton 60, Silverton 28

The twilight game of the Gridiron Classic will be one of the best of the event. The Bucks are trying to return to their state prowess, but Strawn returns an elite Division II team. … Strawn 78, White Deer 65

Follett is one of the best in the state. The Panthers will go into Jayton on Saturday and take care of business. … Follett 72, Aspermont 36