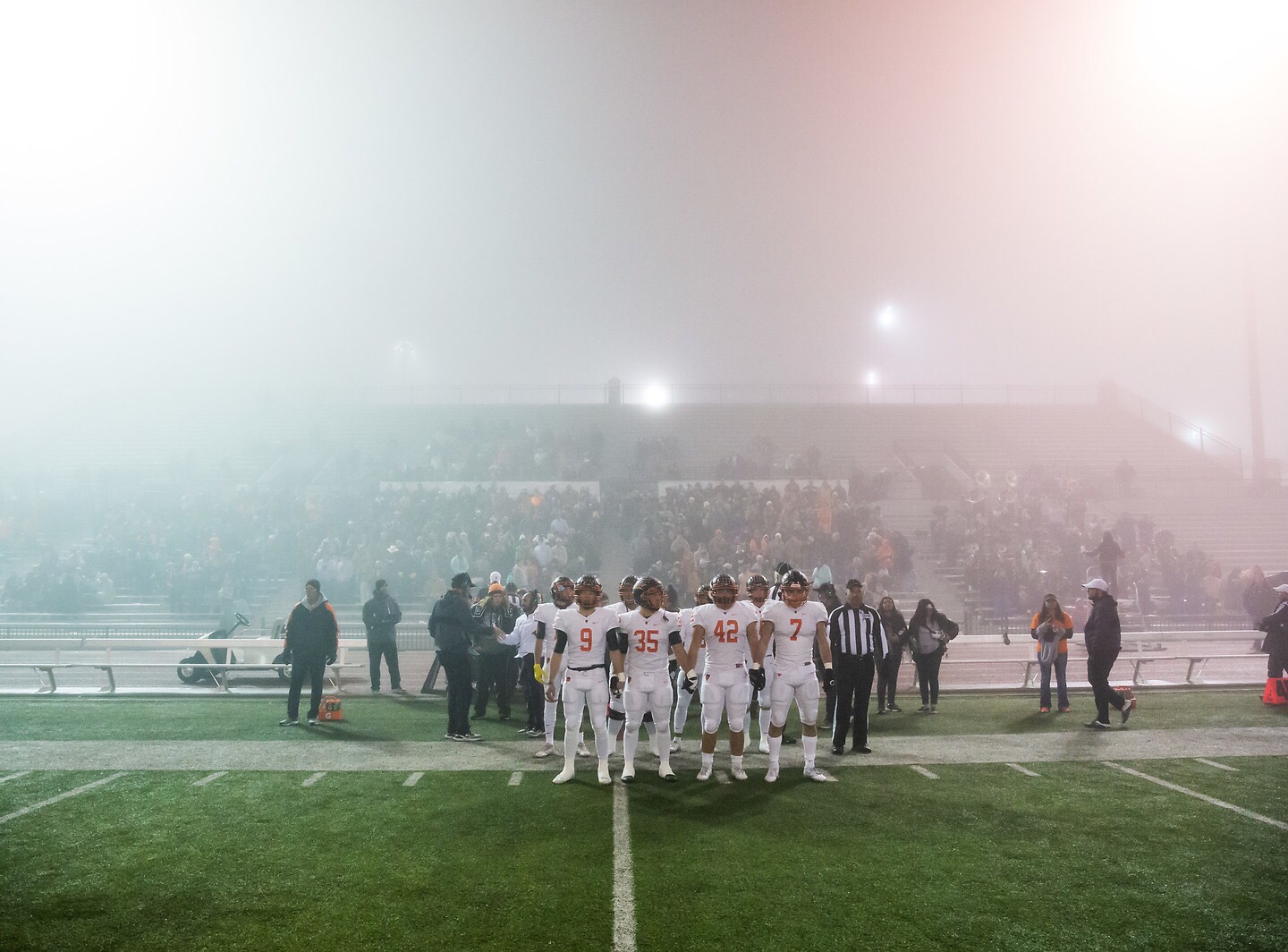 The Dumas Demons are coming off a historic 13-1 season and a run to the Class 4A Division I state quarterfinals. [John Moore/ Press Pass Sports]

Borger (0-0) at Hereford (0-0), 7 p.m. Borger is in its second-year under coach Duane Toliver and will be improved from last year’s 1-9 season. The Herd is young with four starters returning off a five-win season last year. Go with Herd at home and under leadership of veteran coach Don DeLozier. … Hereford 21, Borger 14

Dalhart (0-0) at Perryton (0-0), 7 p.m. Should be a good physical one. It’s the debut of former Perryton player Kurt Haberthur as Rangers head coach so the place will be rockin’ with excitement. But Dalhart coach Joey Reed has 13 starters back from 7-win season. Go with experience over youth. … Dalhart 24, Perryton 17.

Bushland (0-0) vs. Brock (0-0), 7 p.m. Iowa Park. Welcome to the show Josh Reynolds. Bushland’s first-year coach opens his head coaching career with a rematch of last year’s thrilling state quarterfinal where the Eagles pulled out a 20-17 OT win against the Falcons. This game won’t have quite the same impact but it’s still a test for two of the top teams in the region. … Brock 28, Bushland 20.

WT High (0-0) at Canadian (0-0), 7 p.m. The Wildcats seemed locked and loaded for another stellar season. Last year, the Comanches gave the Canadian defense fits with do-it-all QB Avian Cruz. WT High will need that same effort to stay in this ball game against a high-potent Wildcats offense. … Canadian 35, WT High 14.

Littlefield (0-0) at Dimmitt (0-0), 7 p.m. Both teams struggled last year. But a win in the season opener could help either team gain some much needed confidence. … Littlefield 27, Dimmitt 18.

Brownfield (0-0) at Friona (0-0), 7 p.m. It was a banner season in 2019 for the Chieftains making the third round of the playoffs for the first time since 1996. With standout running back Jacob Bautista returning another good year could be in store. … Friona 29, Brownfield 16.

Stratford (0-0) at Spearman (0-0), 7 p.m. No doubt the Lynx remember the 56-0 beating the Elks handed them last season. It’s a much different year in 2020. Stratford is still Stratford, but the Lynx are the talk of the area with athlete Brenen Thompson and his 24 Division I offers. … Stratford 26, Spearman 23.

Floydada (0-0) at Tulia (0-0), 7 p.m. Former Perryton coach Steven Coursey makes his head coaching debut for the Hornets at Younger field with the hopes of ending the night with his first W. … Tulia 34, Floydada 20.

Muleshoe (0-0) at Sundown (0-0), 7 p.m. First-year head coach Jason Richardson is trying to get Mules their first win in three years. To do it, his team will have to be on against the Roughnecks. … Sundown 31, Muleshoe 14.

Booker (0-0) at Wheeler (0-0), 7 p.m. Mustangs senior running back Hesston Marshall could open his Player of the Year campaign in a big way if the Kiowas defense can’t slow him down. … Wheeler 42, Booker 13.

Bovina (0-0) at Boys Ranch (0-0), 7 p.m. The Mustangs return 19 starters who are primed for a big season. The Roughriders will begin a new culture under first-year head coach Aaron Wampler. … Bovina 38, Boys Ranch 17.

Clarendon (0-0) at Seymour (0-0), 7 p.m. Expectation surrounds the Broncos with a stable of young running backs that include speedy Sylvester Ballard and Jmaury Davis. This tandem will make some noise by seasons end. … Clarendon 27, Seymour 13.

Gruver (0-0) at Texhoma, Okla. (0-0), 7 p.m. Nobody lost more than the Greyhounds from a year ago. Gone is Jalin Conyers to Oklahoma, and longtime head coach Terry Felderhoff. First-year head coach Lee Brandon will have his hands-full trying to slow down Red Devil and former Stratford Elks fullback Brit McQuitty. … Texhoma 34, Gruver 14.

White Deer (0-0) vs Strawn (0-0), 6 p.m. This game holds the honor of being the Six-man game of the week. Strawn has been a household name in Division II for several years now. White Deer is trying to make a name for themselves this season, and winning this contest can do just that. … White Deer 58, Strawn 42.

Groom (0-0) at Happy (0-0), 7 p.m. ​This will be one of the more competitive games of the night as one of the top teams in Division II visits the Cowboy Corral to play a team ready to be back on top of Division I. When a game is this close always take the best player. That’s Tigers do-it-all stud, Gunner Lamb. … Groom 74, Happy 69.

Lefors (0-0) at Kress (0-0), 7:30 p.m. ​Both of these teams are looking for opportunities to grow before the district season begins. The Pirates won last year’s matchup, but the Kangaroos brings back the most experience. … Kress 39, Lefors 33.

Miami (0-0) at Paducah (0-0), 7:30 p.m.​ Miami has potential to show much improvement under new head coach Clint Linman. But this first game of the season is going to be a big measuring stick contest against a very talented Dragons squad. … Paducah 72, Miami 44.

Claude is still trying to figure out where they fit into the Six-man game and what works best for them. Meanwhile, the Swifts are trying to open the season with a statement. … Nazareth 56, Claude 24.