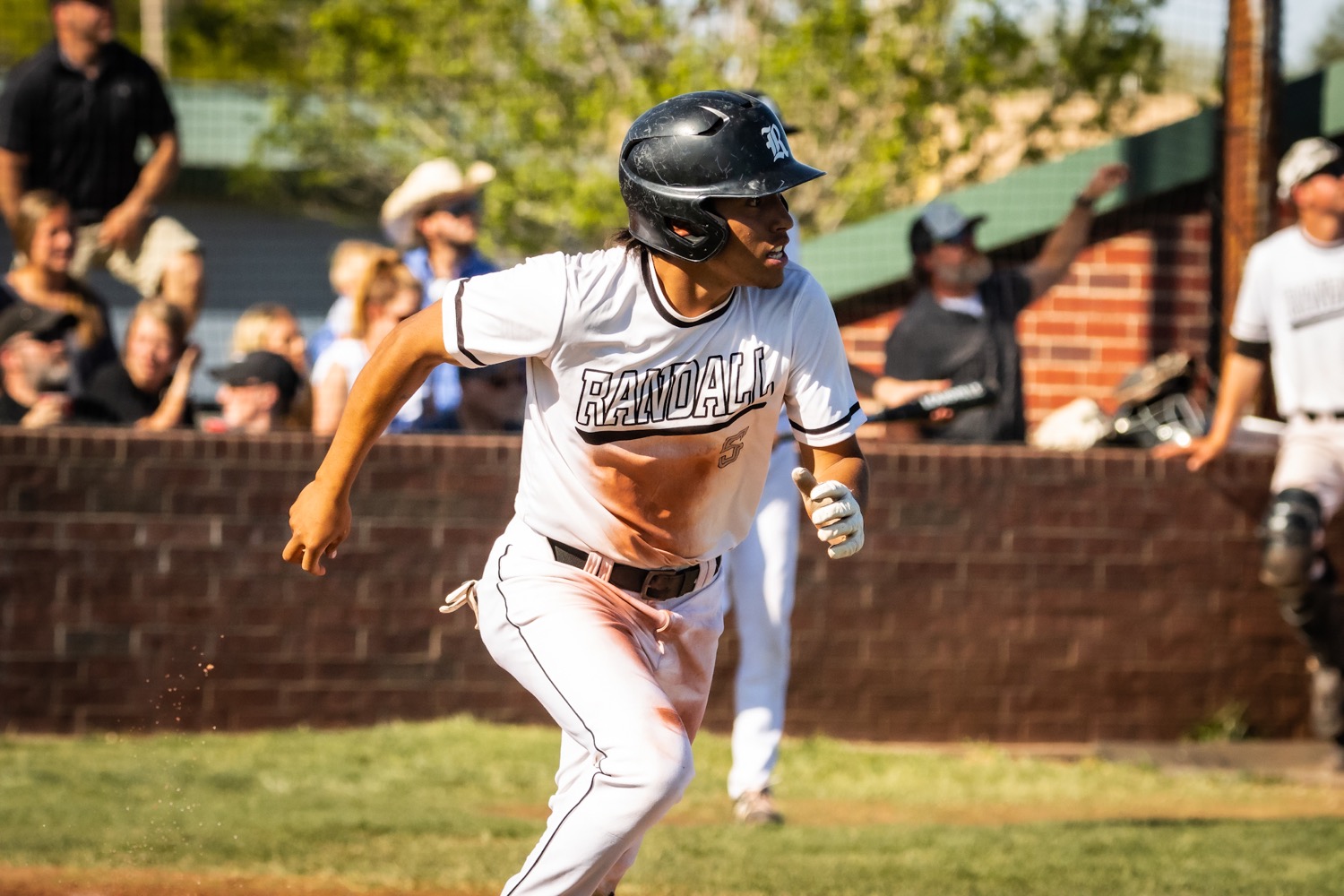 Randall’s Alexys Camacho delivered a single against Caprock during a District 3-5A matchup on Friday at the Randall Baseball Complex. [Ben Jenkins/ Press Pass Sports]

In a District 3-5A regular season finale which meant nothing in terms of the standings, Amarillo High and Tascosa nonetheless hooked up in a memorable pitchers’ duel Friday afternoon at Tascosa.

And as has been the case all season, Amarillo High showed why it’s the district champion by having just a bit more in the arms department.

The Sandies and Rebels were scoreless for four innings, providing the kind of tense atmosphere which could be expected for two teams headed for the playoffs. But Amarillo High broke through for three runs in the top of the sixth and made them hold up for a 4-1 victory.

Jett Johnson of Amarillo High and Tascosa’s Ryne Wingate both threw six solid innings. Each gave up a run in the fifth as Will Maynard’s sacrifice fly drove in Will Franklin to give Amarillo High a 1-0 lead, but Tascosa came back with an unearned run in the bottom of the inning to tie it 1-1.

With two outs in the top of the sixth, Amarillo High’s Tristan Curless belted a two-run double to give the Sandies the lead for good. Amarillo High’s Sandler Needham pitched a scoreless seventh for the save.

Johnston struck out nine and gave up only a single to Javen Patrick.

In their final tune-up before the playoffs, the second-place Randall Raiders showed that they meant business, as they jumped on Caprock for five runs in the first inning en route to a 12-2 10-run mercy rule victory in six innings to take some momentum into the playoffs.

Randall (18-13-1, 11-4) got on the board without a hit as Tucker Garza was hit by a pitch with the bases loaded to bring in the game’s first run. The big hit in the inning was Ruben Hendren’s two-run single as the Raiders led 5-0 at the end of the frame.

Caprock (3-24, 2-13) got two runs in the third on a passed ball and an RBI groundout by Aldo Ostos to make it 6-2, but those were Caprock’s last runs of the season. Randall scored three in the fourth, two in the fifth, and ended the game in the sixth when Hayden Smith drove in a run on a groundout.

Palo Duro’s tough season came to a rough end, as Plainview scored the game’s first 13 runs in two innings and cruised to a 15-3 five-inning run rule victory over the Dons.

Plainview took a 4-0 lead in the first inning as Isaac Garza had a bases-loaded triple and later scored on a groundout. The Bulldogs piled it on with nine more in the second, highlighted by Charles Gipson’s three-run home run.

Palo Duro (5-23-1, 1-14) got on the board in the third as Trey Shaw was hit by a pitch with the bases loaded. Chris Esparza would follow with an RBI single.

Junell struck out 11 and dominated from the start as Bushland (22-0, 10-0) was in control just like in the previous 21 games. The Falcons gave Junell all the support he needed as Hays McDonald singled to drive home Tanner Troxell for a 1-0 first inning lead.

Bushland put the game away with eight runs in the second. The Falcons had six hits in the inning.

Junell singled home Branson Goen in the bottom of the third to make it 10-0 and attain the 10-run margin, and the only question was if Junell would get the perfect game.

River Road overcame a brief early deficit with five runs in the bottom of the third to take control and beat Dalhart 9-5 inn the regular season finale Saturday afternoon to clinch the No. 3 playoff spot from District 1-3A.

Dalhart took a 2-1 lead with a run in the top of the third, but River Road (10-13, 6-4 in district) roared back to take a 6-2 lead in the bottom of the inning. The Wildcats took the lead for good on a two-run error and Ries Clark and Tate Upchurch followed with run-scoring singles.

That’s the way it stayed until the top of the sixth when Dalhart (10-13, 4-6) rallied for three runs to cut it to 6-5. Omar Cervantes got the scoring started in the inning with a two-run inside the park home run.

But the Wildcats added some insurance with three runs in the bottom of the inning.

Clark had two hits and drove in two runs for River Road. Winning pitcher Lance Welps had three hits and scored two runs while striking out 10 on the mound for the win.

Dimmitt dominated from the start, scoring 12 runs in the second and third innings to roll to a 13-3 five-inning run-rule victory over Friona and take some momentum into the playoffs as the district’s No. 2 seed.

After a scoreless 1 ½ innings, Dimmitt (20-5, 8-2) mounted a two-out rally in the second, getting on the board when two runners scored on a passed ball. Winning pitcher Javion Casas then singled home a run followed by back-to-back homers from Kobe and Julius Carpio to make it 6-0.

The Bobcats got their run-rule margin with six runs in the bottom of the third on only three hits. Friona (2-18, 1-9) cut it to 12-3 in the top of the fifth, but Dimmitt ended it early when Kobe Carpio singled and eventually scored on a dropped fly ball.