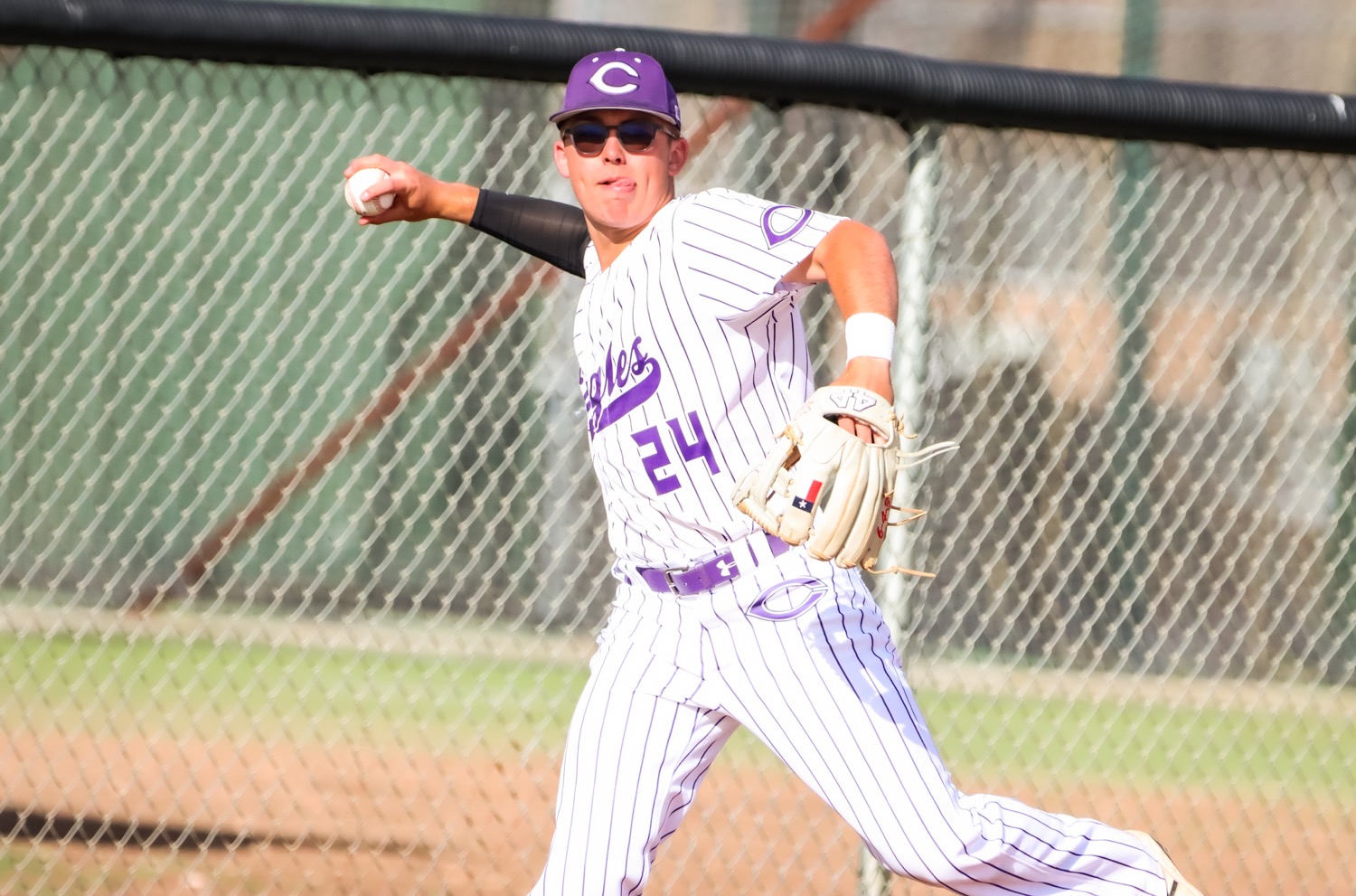 Canyon’s Reid Rousser makes a throw to first during the Eagles District 4-4A contest against Pampa at Conner Park in Canyon on Tuesday. [Ben Jenkins/ Press Pass Sports]

Canyon blew open a close game with seven runs in the bottom of the sixth which proved to be more than enough cushion to beat Pampa 12-4 on Tuesday afternoon at Conner Park and keep the Eagles unbeaten atop District 4-4A.

Canyon responded with a run in the bottom of the fifth, but the sixth inning was the real game changer. The first seven batters reached base in the inning, highlighted by Brody Cook’s two-run single. Canyon capped the inning with three runs on two batters walked in and an error.

Dumas scored eight runs in the top of the fifth to eventually invoke the 10-run mercy rule and rout Borger 17-3 and stay a game behind Canyon in second place in the district.

The Demons (11-9, 4-1) were comfortable the whole way, taking a 9-3 lead into the fifth. A.G. Gutierrez hit a two-run double and Jesus Narvaez had a three-run triple to ensure that Dumas would end the game early.

Five hitters had at least two hits for Dumas, who had 16 hits. Leadoff hitter Broc Kinikin set the table by going 4-for-4 and scoring three runs.

Blake Boelter allowed Borger (2-18, 0-5) only two hits and struck out 12 in five innings for the victory.

Hereford scored five runs in the top of the fourth to take control of the game and beat Perryton 8-4 on the road to claim sole possession of third place in the district.

The Whitefaces (7-10, 3-2) never trailed and took a 3-1 lead into the fourth. Hereford put the first four batters on base and Josiah Pena got things started with a two-run single. That gave the Herd a 5-1 lead and proved to be the insurance they’d need.

The Dimmitt Bobcats took a lead late that resulted in a 5-4 win against River Road 5-4 on Tuesday night at River Road.

The game was tied, 2-2, with Dimmitt batting in the top of the sixth. That’s when Kobe Carpio doubled on a 1-1 count, scoring two runs nabbing the lead for the Bobcats.

River Road held an early 2-0 advantage in the fifth inning getting tremendous work out of starting pitcher, Lance Welps. Welps had delivered four innings worth of shutout work while keeping Bobcats off the bases and striking out eight.

Welps was supported by Trent Logan who led off the third with a double, and later scored for a 1-0 lead. The Wildcats were able to tack on another run in the fourth on a fielding error by Dimmitt making it 2-0 in favor of River Road.

Across the diamond, pitcher Julius Carpio was keeping the Bobcats in it, allowing only two earned runs on the night. Carpio finished his performance by hurlding six strong innings, fanning 14 Wildcats, allowing six hits in the come-from-behind victory.

Dimmitt evened up the score In the fifth when Carpio helped himself out at the plate slugging an RBI triple. The Bobats tacked on three runs in the sixth for a 5-2 advantage giving them much needed insurance.

The Bushland Falcons were on a business trip Tuesday in Friona coming away with a 27-1 run-rule victory.

The 27 runs scored were scored off of 20 hits by the Falcons.

In the blowout victory, eight Bushland hitters had multiple hits, and nine drove in a run for the team. As a surprise to no one, Coleman Junnell led the way offensively for the Falcons as he drove in five runs on two hits including a fifth inning 3-run homer, and also scored three times.

While the runs were being scored, Tate Nebut took the hill to keep Friona at bay. Nebut gave up only two runs in his five innings of work and struck out 10 batters in the process.

Both teams had their bats swinging on Tuesday in a high scoring affair that saw Dalhart double up Tulia 24-12 on the road Tuesday.

It was all Hornets early as Tulia scored eight runs in the bottom half of the first inning to take an 8-3 lead into the second, however Dalhart never stop scoring.

Dalhart was able to score a run in every one of its seven innings at the plate Tuesday night. The The blistering hot offense for the Golden Wolves was led by Carter Anderson who ended his night a perfect 4-for-4 getting on base safely in all of his at bats, driving in seven runs finishing a long ball shy of the cycle. Past Anderson, Michael Ruiz and Trace Jenkins also finished their nights with multiple hits.

Tulia held their own at the plate as well getting 12 runs up on the. Dadrien Subealdea was the highlight for the Hornets finishing his night 2-for-5 with four RBI and a triple.