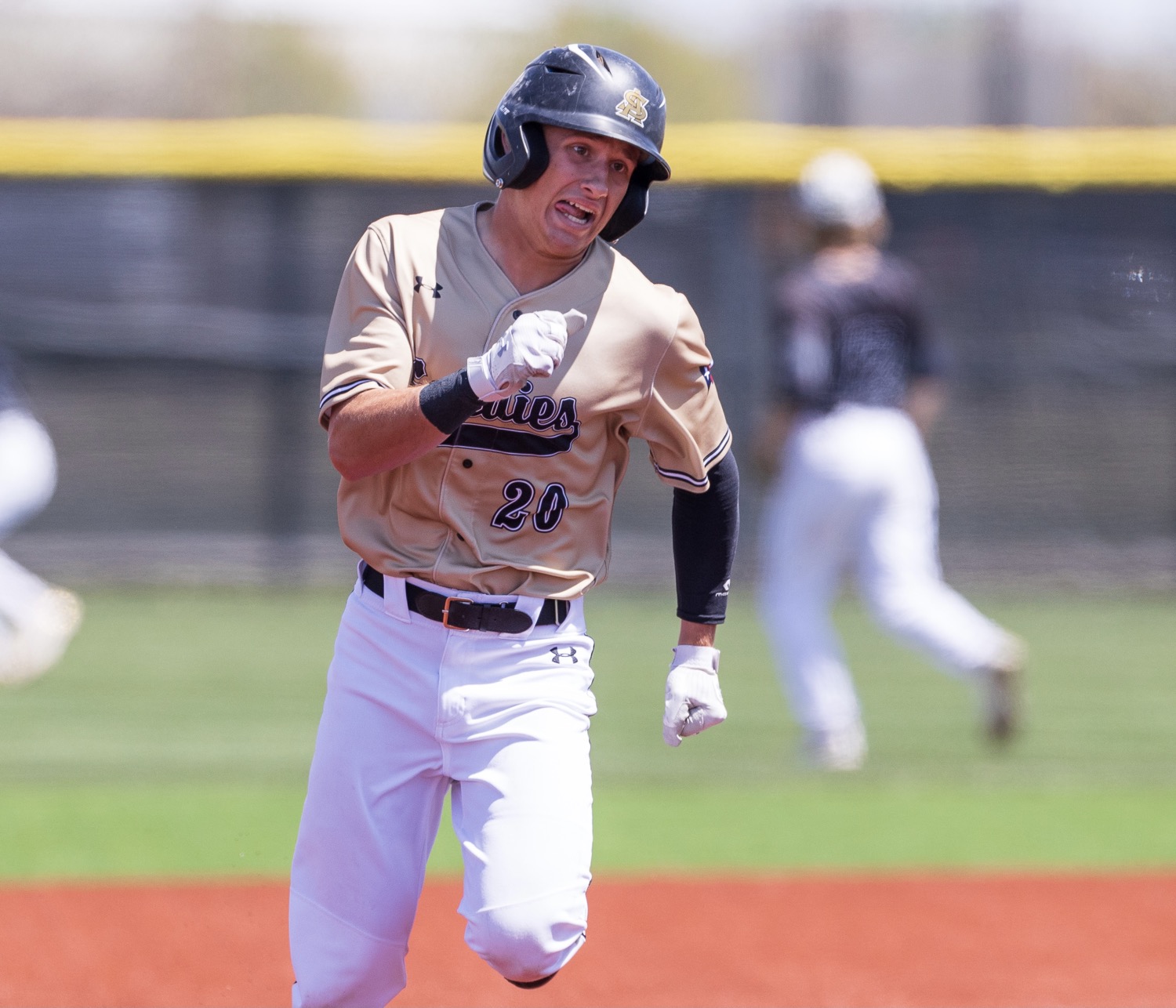 Amarillo High’s Max Milligan wheels into third with a triple against Randall during a District 3-5A matchup at the Sandies Baseball Complex on Saturday. [Tom Carver/ Press Pass Sports]

Following an eight-day layoff in District 3-5A, the Amarillo High Sandies put their hitting shoes on and moved to the doorstep of a playoff berth Saturday afternoon at Sandie Field.

The Sandies scored their second straight 10-run victory over Randall in as many days, taking advantage of eight runs in the first inning to roll to a 13-3 win decided in five innings due to the 10-run mercy rule. Couple that with a 23-13 win at Randall on Friday, and it’s easy to see why Amarillo High (17-6, 8-1 in district) maintains a two-game lead atop the district and will clinch a playoff spot by beating Caprock in either of two meetings next week.

Saturday’s game wasn’t as prolific a performance for either team at the plate as Amarillo High’s 23-13 win at Randall on Friday. Both teams took advantage of the wind out of the north for a final which more resembled a Battle of Bell football score.

Amarillo High kept it up in the second meeting of the week, as the Sandies pounded out 12 hits, including seven for extra bases.

“It helps playing the same team back-to-back days,” AHS coach Randon Johnson said. “I think guys got comfortable and saw the ball really well. The big thing that I loved is the approach. These guys are hitting the ball the other way. The wind kind of dictated where the ball was going to fly the last two days and these guys had an approach to go out there and go with it.”

The Sandies didn’t trail once against Randall (12-13-1, 5-4), although they came close at the outset. Randall’s Noah Baker led off the game with a double off AHS starter Jett Johnson and with one out the Raiders loaded the bases. But Johnston escaped by striking out Taylor McDaniel and getting Kole Dudding to line out to left, where Will Maynard made a diving catch.

Amarillo High seemed to take that as momentum into the bottom half of the first, as the first five batters reached base, two via error. Tristan Curless had Amarillo High’s first hit, a two-run double which gave the Sandies a 3-0 lead.

That was the first of two doubles for Curless, who also doubled in Friday’s win. In two days, the Sandies piled up 16 extra base hits.

“I had a lot of confidence going into at-bats,” Curless said. “Not all of them turned out like I wanted to but I was glad I was able to come out and get things started for the team. Yesterday we were extremely hot at the plate and today we just followed through.”

Curless scored on an errant pickoff throw by Randall starter Hunter Phillips, then doubles by Johnston and Will Franklin made it 5-0. Phillips was pulled after facing only eight batters and retiring only one before giving way to left-hander Cayden Eason.

It was not a situation the Raiders wanted to face after using seven pitchers Friday afternoon.

“Any time something like that happens you look back to did I have the right guy going out there because we had multiple guys go out there and not have a good outing and then the next guy come in and do a really good job,” Randall coach Cory Hamilton said. “Hunter’s thrown really well all year long, but he had that one inning he couldn’t get out of. We were a little bit limited today on pitching. You’ve got to tip your hat to (Amarillo High’s) pitchers and their hitters. They pitched better than we did both days, they hit better than we did both days, they played better defense than we did both days.”

Max Milligan capped the inning with a two-run triple off Eason and scored on a wild pitch to make it 8-0, concluding an inning where the Sandies sent 11 batters to the plate.

Randall got three runs off Johnston in the next inning, as Hayden Smith and Taylor McDaniel had RBI singles to cut it to 8-3. Johnston was pulled form Sandler Needham after that.

Needham, who’s been a relief specialist all season, retired the first six hitters he faced and gave up only one single and no walks in three innings to earn the win.

“It’s kind of one of those deals with a game situation and who needs work and who’s ready to go,” Johnson said. “Sandler threw one inning yesterday and we pulled the hook to make an offensive substitution, so today it was a good spot for him to come in. He gave us a chance to win it in five.”

Amarillo High carried a 12-3 lead into the bottom of the fifth and Bryson Slaughter singled with one out, and was eventually on third base with two outs. Appropriately, Needham ended it early for the Sandies with a single to left to bring home Slaughter and attain the 10-run margin.

Tascosa splits with Plainview, moves into tie for third

It was a mixed weekend for the Tascosa Rebels, who lost 10-1 at Plainview on Saturday to split two games in as many days with the Bulldogs, but nonetheless improve their place in the 3-5A standings.

Thanks to a 4-2 victory over Plainview at home the day before, Tascosa (11-11, 5-4) moved into a tie with Randall for third place in the district.

The Rebels won a pitchers’ duel in the first meeting between the teams, as Logan Malleck went 6 2/3 innings for the win. Malleck gave up five hits and struck out six while walking none for the win, and Ryne Wingate recorded the last two outs for the save.

When the teams headed to Plainview (14-10-1, 7-2) for the second game, it was a different story. The Bulldogs took control of the game with three runs in the bottom of the fourth to knock out Tascosa starter Koben Yarbrough and coasted from there.

Palo Duro overcame a heartbreaking loss to Caprock at Hodgetown the night before by scoring in the top of the seventh inning on David Alvarado’s RBI single for an 8-7 victory, giving the Dons their first district win of the season.

In the top of the sixth, Ismael Lee doubled with one out and went to third on a groundout for two outs. Alvarado then singled to left to bring home Alvarado with the go-ahead run, and PD reliever Hie D. Soe held Caprock scoreless in the bottom of the seventh to give the Dons their first district win.

Palo Duro was one out away from winning at Hodgetown on Friday night, but with two outs in the top of the seventh, Caprock (3-18, 2-7) took the lead when the Dons dropped Jasiel Acosta’s fly ball, allowing two runs to score for the lead. Acosta pitched the final two innings to earn the win in relief.

Coleman Junell threw a gem for the Bushland Falcons and drove in four runs against Dalhart in a 13-0 win at Bushland.

On the bump, Junell stalled the Dalhart offense for the complete game shutout. Junell was able to keep the Wolves to only three hits at the plate and racked up nine strikeouts in his five innings of work. At the plate, Junell’s two singles scored two runs in both the first and third innings. He finished his night going 2-for-3 with a walk and four RBI’s.

Bushland’s offense was active as usual, putting up 13 runs in five innings. Alongside Junell, five Falcons finished the game with multiple hits. Ryan Samford finished 3-for-3 at the, batting in one run but scoring every time he reached base.

The Dimmitt Bobcats used an explosion of offense and solid pitching to shut out the Hornets 24-0 in Tulia on Saturday.

Kobe Carpio was impressive yet again for the Bobcats. In his four innings on the mound, the senior allowed only one hit, gave up only two walks, but did strike out seven. Victor Flores finished the game in the fifth striking out the side in a dominant win for the Bobcat pitching staff.

The pitchers got more offensive support than they probably expected as the Bobcats put up 24 runs in only five innings. Eight of the 10 batters who came to the plate for the Bobcats had multiple hits.

The River Road Wildcats were ready for a win after their last loss, and they came up big by defeating Friona 22-2 at home.

Lance Welps was a driving force for River Road’s offense Saturday. The leadoff batter finished 4-for-4 at the plate with three RBIs and scored four more runs himself.

Luis Delgado was a complement to Welps in the three hole for the Wildcats. Delgado came away with four RBIs in the offensive outburst with one of his two hits coming on a 3-RBI triple in the bottom of the second. The Wildcats displayed some power as well Saturday with home runs by Jaret Griffin and Jason Quintanilla.

Jaret Griffin went the distance for River Road on the mound, pitching five innings allowing only one earned run on one hit, four walks, and striking out 10.

District 1-3A compiled by Tommy King