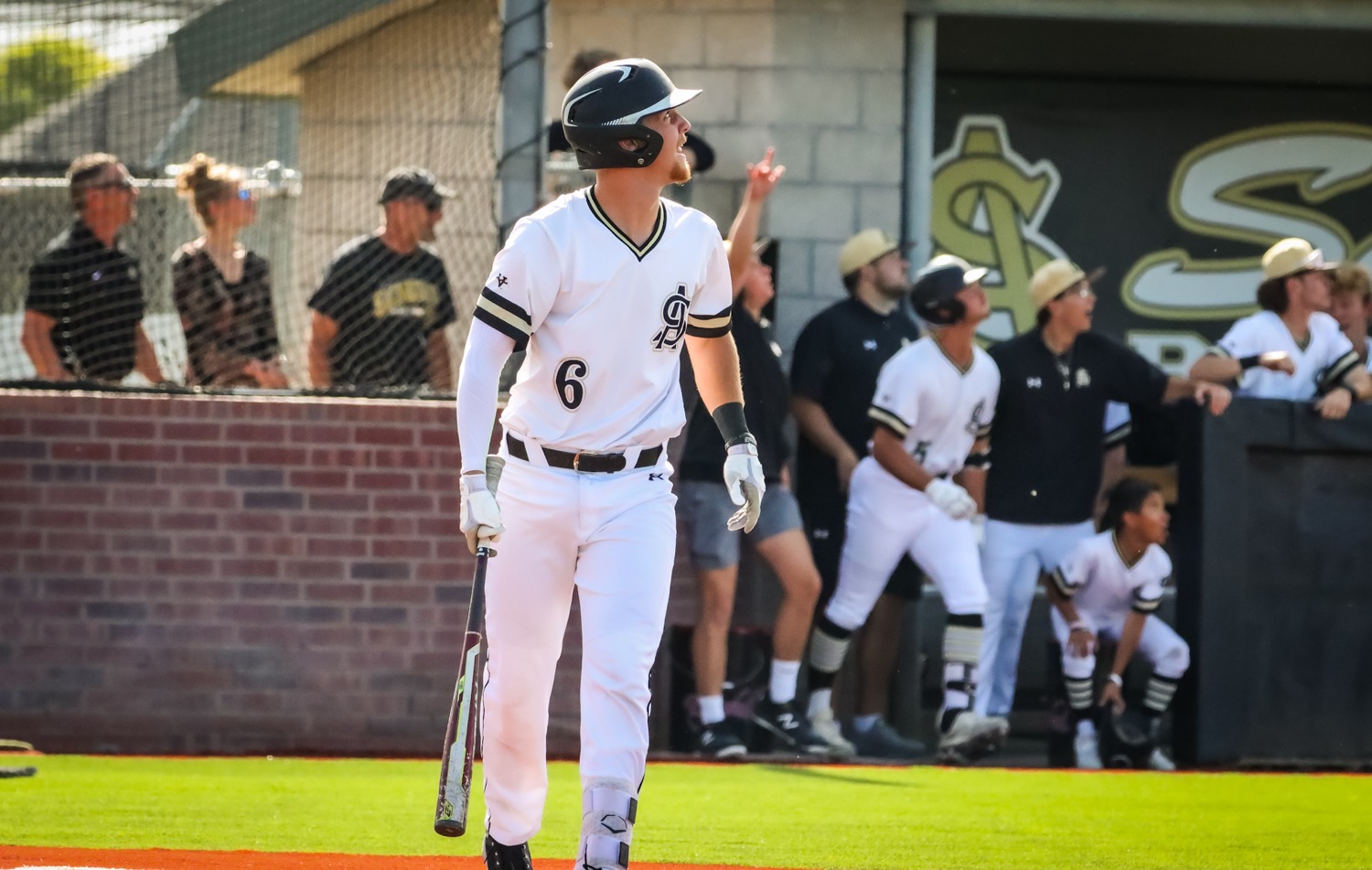 Amarillo High’s Cayden Phillips stares down a homer during the Sandies 7-1 win against Lubbock-Cooper in a Class 5A regional quarterfinal game Friday at the Sandies Field. [Ben Jenkins/ Press Pass Sports]

On paper, what Amarillo High did to Lubbock Cooper over two days of their Class 5A region quarterfinal series might seem like, at the very least, a mild surprise.

But history indicates that nobody, least of all the Sandies and their supporters, should be the least bit shocked.

The Sandies completed what looked like an unlikely sweep of No. 2 Cooper on Friday at Sandie Field, rolling to a 7-1 victory to win the series 2-0. No. 6 Amarillo High (29-8) moves on to the region semifinals next week against the winner of the Mansfield Legacy-Birdville series.

This marks the fifth time in the last six years that the Sandies have reached the region semis, with last year being the lone exception due to COVID-19. So don’t call sweeping Cooper (30-6) an upset since the Sandies are very used to going this far.

“We’ve got a lot of moving pieces, a lot of guys who can go in at different places and everybody’s just ready for their time,” AHS coach Randon Johnson said. “Everybody’s ready for their opportunity and when you do that at the right time good things happen.

For two days against the Pirates, the most productive of those moving pieces was senior Tristan Curless. In Thursday’s 9-5 game one win at Cooper, Curless did his damage at the plate, driving in four runs, including a three-run double which capped the scoring and gave the Sandies some valuable insurance.

In game two, it was on the mound where Curless came up big. While he didn’t retire the side in order once, the left-hander rarely got in serious trouble, overcoming five walks by striking out seven and giving up four hits in six innings.

“Yesterday showed us (the Pirates) could definitely swing it so I was just trying to hit my spots and let my defense play behind me,” Curless said. “We had zero errors in the field. Especially since we took (game one) at their home place I knew we just had an advantage from the very start.”

Amarillo High never trailed over two days and set the tone at the plate from the outset. Jake Maynard led off game two with a triple to right-center off Jude Cook, who entered the game with a sub-1.00 ERA.

Maynard scored the game’s first run on a wild pitch. Bryson Slaughter followed with a single and scored on a home run to left by Cayden Phillips to make it 3-0, giving Curless all the support he needed.

The Sandies did the rest of their scoring with four runs in the fourth to knock out Cook. Jett Johnston led off the inning with a homer and Jake Maynard tripled home his twin brother Will and scored on another wild pitch to conclude Amarillo High’s scoring.

For Jake Maynard, it’s been an especially rewarding postseason. He signed with TCU, but because of a torn ACL suffered during football season, he was late getting started with baseball but is making up for lost time.

“All that time I missed I was just ready to get back and I finally could so I’m just trying to make the most out of it while I’m here,” Maynard said. “We’re going to have a good week of practice next week, then whoever we play go in and do the same thing we did this week, just try to dominate.”

The only blot on Amarillo High’s ledger came in the top of the sixth, when Curless lost a shutout as Kaleb Skull hit a sacrifice fly to score Kyler Jordan with Cooper’s lone run.

“I can’s say enough about our guys, just the way they competed all week,” Johnson said. “To win a game at Lubbock Cooper, that’s hard, hard to do, then to come over here and play this way today, I’m just super proud of these guys who laid it all out there today.”

Amarillo High’s District 3-5A rival Randall saw a successful season come to an end, as the Raiders were swept by Abilene Wylie, seeing their season end with a 17-7 10-run mercy rule loss in five innings at Lubbock Cooper.

The Raiders led only once in the series. They took a 1-0 lead in the top of the first to start game two on an RBI double by Mason Ladd.

But Wylie (25-7) took control by scoring four runs in the bottom of the second to take the lead for good. The Bulldogs took a 3-1 lead on J.T. Thompson’s two-run double. Thompson drove in five runs on the day.

Ladd and Taylor McDaniel drove in runs with singles in the top of the third as Randall cut it to 4-3, but that’s as close as the Raiders got. Wylie responded with four runs in the bottom of the inning and Randall never got closer than three runs after that.

Wylie attained the run-rule margin with six runs in the bottom of the fifth, ending the game with two outs.

The Bulldogs got the upper hand in the series with a 9-1 win in the first game Thursday.

The West Texas High Comanches showed why they’re the last Texas Panhandle team standing in Class 2A by coming through big late twice against Wellington.

WT High had big innings late to sweep the Skyrockets at Lockney, completing their sweep by scoring twice in the top of the seventh Saturday afternoon for a 5-4 victory. Coupled with Thursday’s 4-2 game one win, the Comanches (21-3) won the series 2-0 and will face Anson in the region semifinals next week at a date and time to be determined.

The Comanches took a 3-0 lead in the top if the first of game two on an RBI double by Kristian Cruz and a pair of groundouts. But they put up only zeroes each of the next five innings against Wellington starter Creighton Killian.

Wellington took a 4-3 lead in the bottom of the fourth on back-to-back doubles by Kayden Valles and Mark Ramirez. But with two outs in the bottom it slipped away from the Skyrockets, as Killian left the game after reaching the pitch count.

With the bases loaded, West Texas High scored on a passed ball and a steal of home to take the lead. Nick Romero then retired Wellington in order in the bottom of the inning to preserve the win for Dawson Reed, who threw 4 1/3 innings of relief.

Romero also got the win in game one, throwing a complete-game five-hitter. However, he wasn’t assured the win until the Comanches took the lead with four runs in the bottom of the sixth, as Caleb Ogorman’s two-run double gave them the lead for good and Reed followed with an RBI double and scored on Romero’s single.

For the first time since 2002 the Nazareth Swifts are one round away from playing at the UIL Class 1A state tournament.

Nazareth accomplished that feat by defeating district foe Kress 8-1 in a one-game Class 1A regional semifinal Tuesday afternoon in Plainview.

Carson Heiman had a big afternoon going 3-for-4 with a pair of doubles driving in three runs. Teammate Derek Dyer blasted a 2-run homer, and Aiden Moore was strong on the mound. Moore threw a complete game, allowing two hits, racking up 10 strikeouts.