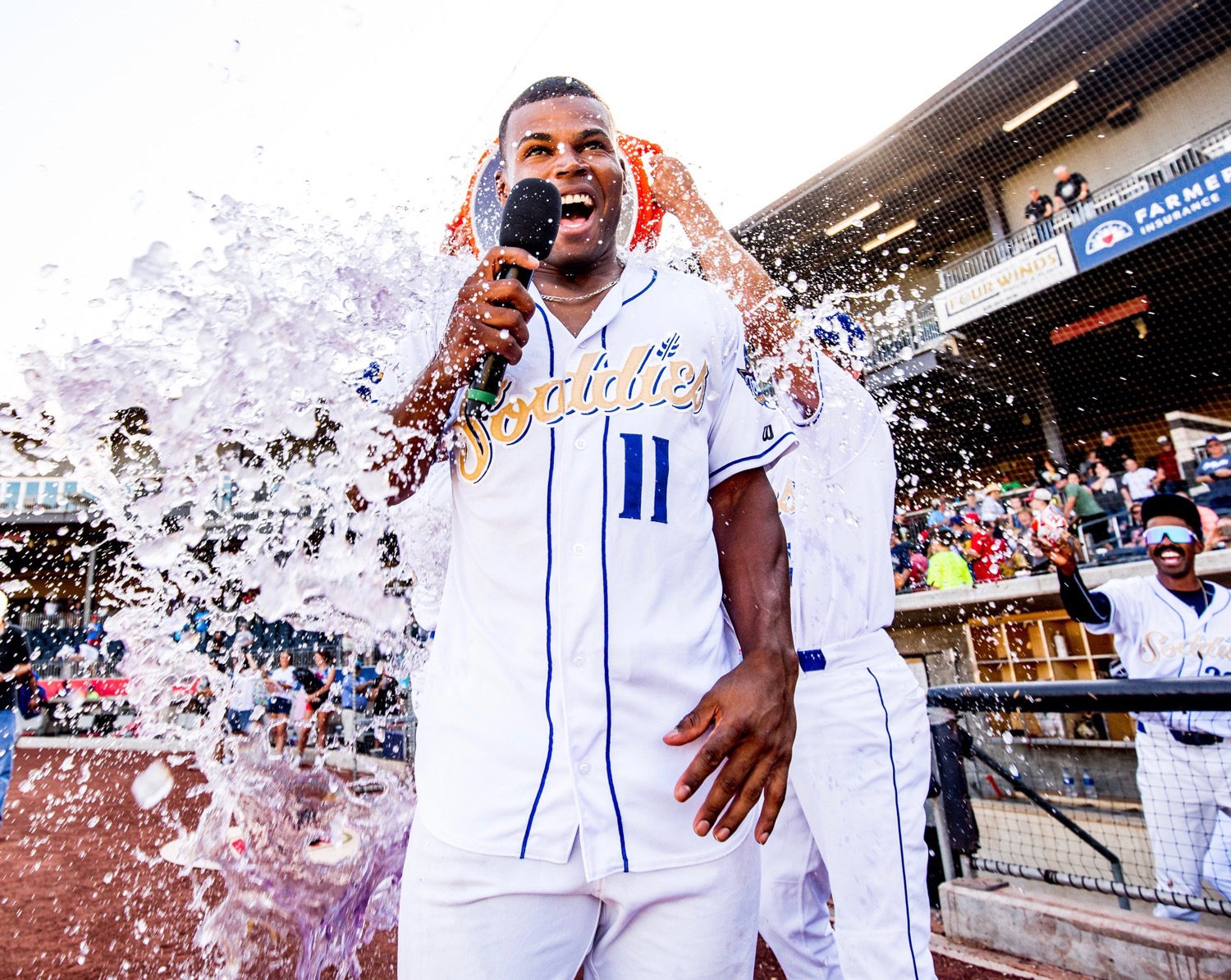 They may win the league championship or they may not even make the playoffs, but in their two years of active existence, the Amarillo Sod Poodles have gotten this storybook endings thing down pat.

The Sod Poodles ended a 12-game homestand and their second full season at Hodgetown on Sunday afternoon knowing they couldn’t repeat the onfield success of their inaugural season when they won the Texas League championship. But they still left their hometown fans happy.

In the bottom of the 10th inning in a typically wild Hodgetown game against the Frisco RoughRiders, the Sod Poodles trailed by a run and were down to their final three outs of the season regardless of what happened. It was only natural that their best hitter from the beginning of the season would be at the plate when the game ended.

With two runners on and one out after having tied the game, Stone Garrett blasted the first pitch from Frisco reliever Daniel Robert out of the park to left-center field in what was almost certain to be his last swing as a Soddie, lifting the Sod Poodles to a 14-11 win to conclude the regular season.

“I’m not gonna lie,” said Garrett of thinking about the possibility of going yard to say goodbye to Amarillo. “I knew I was near 80 RBIs with 24 home runs with a .278 average and one good swing could get those numbers nice and even and it did do that.”

Garrett did finish the season with 25 homers, which was second in the Double-A Central League to Tulsa’s Ryan Noda, but his homer broke the tie with Noda for the league’s RBI crown with 81. Such a season will likely ticket him to the Sod Poodles parent club Arizona Diamondbacks Triple-A affiliate Reno to start next season.

But aside from individual accomplishments, Garrett’s homer made a major statement regarding the Soddies’ impact on the league. The Sod Poodles finished the season 59-61, out of the playoff picture, but their win over Frisco still decided things.

Because of the loss, Frisco (64-55) was eliminated from the Central League’s championship playoff series by virtue of losing a tiebreaker with Northwest Arkansas, who beat Springfield 9-4. Had the RoughRiders beaten the Sod Poodles in the finale, they would have been in the championship series against Wichita.

It was a typically entertaining Hodgetown game, as the two teams combined for eight homers. Prior to Garrett’s blast, Eduardo Diaz hit two homers for the Sod Poodles, including a grand slam.

Frisco scored three runs in the top of the ninth off Soddies reliever Denson Hull for a 10-7 lead, but the Sod Poodles tied it with one out in the bottom of the inning with a three-run homer by Ryder Jones to force extra innings. The RoughRiders scored a run in the top of the 10th to reclaim the lead, then the Sod Poodles tied it when Jancarlos Cintron doubled home placed runner Lyle Lin to tie the game, eventually setting the stage for Garrett’s game-winner off Daniel Robert.

“I’ll remember today as just a hell of a ball game,” Garrett said. “To finish it with a great group of guys fight to the end, like Ryder Jones coming up with a huge three-run homer to tie it and then the guys getting on in extra innings to let me put the swing on the ball is special. I couldn’t ask for more.”

The last inning of this season won’t carry the drama of the last one of the inaugural season in 2019 when the Sod Poodles were affiliated with the San Diego Padres. In game five of the Texas League Championship at Tulsa, the Sod Poodles rallied from a two-run deficit in the top of the ninth on Taylor Trammel’s grand slam to highlight an 8-3 victory and break the hearts of the Drillers.

This year ended in a victory thanks to a big homer as well, this time at home. Manager Shawn Roof and the players who were around for the end of the season Sunday, got to experience the passion Amarillo fans had for minor league baseball, which had been absent from town for 37 years and for all of 2020.

“Everywhere’s different,” Roof said. “Just the uniqueness of the city and the way the community supports the team, things like that. This was our first year here affiliated with the Sod Poodles. The front office has been great, they’re first class all the way. The fans brought the energy. We’re excited to be here another nine years.”

The Padres affiliation with the Sod Poodles only lasted a year due to COVID-19 wiping out all minor league baseball in 2020. That meant not only did stadiums like Hodgetown sit stagnant, but so did the development of many minor leaguers.

Roof said that was as big an issue to address as anything in assessing how well this year’s team developed.

“I think the biggest thing we talked about is not having a season last year,” Roof said. “We didn’t really know what to expect from these guys. We didn’t know how they were going to react to having a whole season off. Some of these guys pitched at the alt site (in Arizona) and some of them didn’t, but they came in ready to go from day one in spring training.”

If there was one constant for the Sod Poodles in the field this season, it was pitching. They threw two seven-inning no-hitters against San Antonio this season, and the pitchers who threw them, Matt Tabor and Luis Frias, were both promoted, and Frias was called up to the big club over the weekend.

Other pitchers who were with the team at the end of the season such as Tommy Henry, Drey Jameson, Bryce Jarvis, Ryne Nelson and Brandon Pfaadt all showed at least flashes of dominance in the second half of the season, even at a hitters paradise like Hodgetown.

“They’ve been awesome,” Roof said. “We have some elite pitching in this organization and some great depth. The one thing which is unusual is a lot of starting pitchers when you send them up you don’t get the same kind of talent coming back up, but it seems like everybody who’s coming back up is just as good if not better. They just keep pushing each other to get better.”

Henry is the only starting pitcher who was with the club from the beginning and didn’t miss a start. The other starters, along with several members of the bullpen, were promoted from Single-A teams in some cases after the season was half finished.

Of the position players who started Sunday, only Garrett, Luis Basabe and Jancarlos Cintron were with the club at the beginning of the season. That means several players who finished the year in Amarillo could be back at the start of next year for more seasoning.

“It just depends on what goes on at the big league level who we bring back and how the spots line up,” Roof said. “I would imagine that there would be a good amount of these guys who would come back, at least for a month. If they get off to a hot start and do well, they’ll get up to the next level.”

Roof said he wouldn’t mind returning to Amarillo next season to manage some of those guys.

“I’d do it in a heartbeat,” Roof said. “I think a second year in Amarillo would be awesome, especially a non-COVID year with some of these restrictions. Just the familiarity with the league, where to go, where to eat, what to expect plays a big role in the comfortability of the players as they develop on their path to the big leagues.”