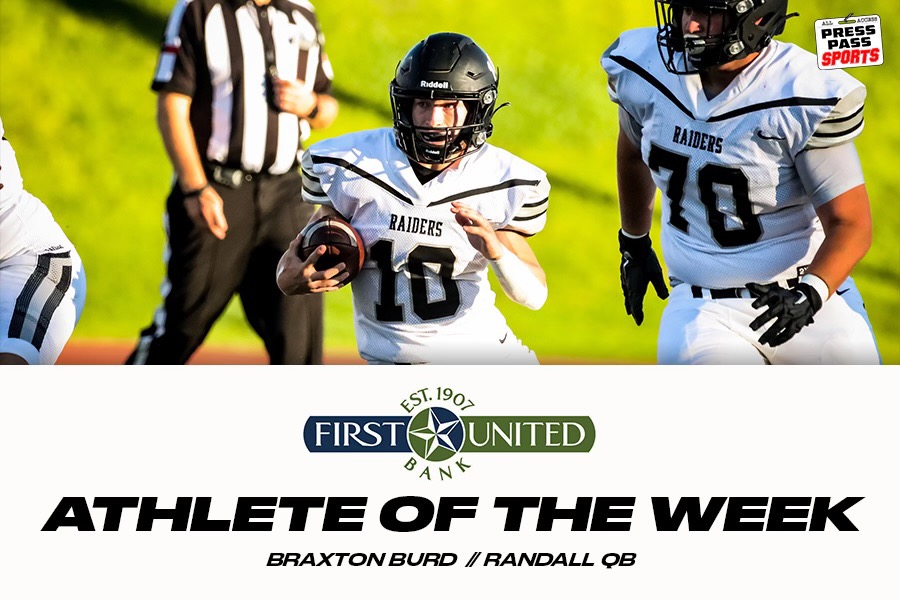 On the field: Burd was the epitome of the dual threat quarterback for the Raiders in last week’s 38-19 win at Dumas which broke a two-game losing streak. He came out hot, completing his first six passes to open the game, completing 12-of-16 passes for 248 yards and three touchdowns, including an 80-yard scoring pass to Isayah Hernandez on Randall’s first play from scrimmage. But Burd’s biggest play might have come with his feet midway through the second quarter. Dropping back to pass in his own end zone, Burd avoided a sack and scrambled around the left side and scooted up the sideline for a 96-yard scoring run which established Randall’s momentum for the remainder of the game. Burd led the Raiders with 144 yards on nine carries.

Coach Gaylon Selman: “Any time the ball’s in his hands you’ve got to feel good. It’s nice that he gets to hold it every play. He puts a lot of pressure on the defense and they’ve got to account for that guy at all times. He’s fun to watch. As far as throwing the ball it was about as good a game as we’ve had in a long time, percentage-wise, yard-wise and all that stuff. He’s got the capability every week to do that and we’ve got a good receiving corps. It was nice to see all that come together.”

Burd: “That was my best game for sure this year. Last year I had a better game in the playoffs against (El Paso) Parkland. I knew we had to make a statement after losing to Pampa. (Offensive coordinator) coach (Grady) Benton told us that if we did our job the first play was going to be a touchdown and everyone did our job. It got the whole team going. (The touchdown run) was the longest run I’ve ever had. I just wanted to make sure I didn’t get the safety. I just made sure I got out of the end zone and it was open and I took off. I think (defenses) are definitely going to be more aware of my running game.”