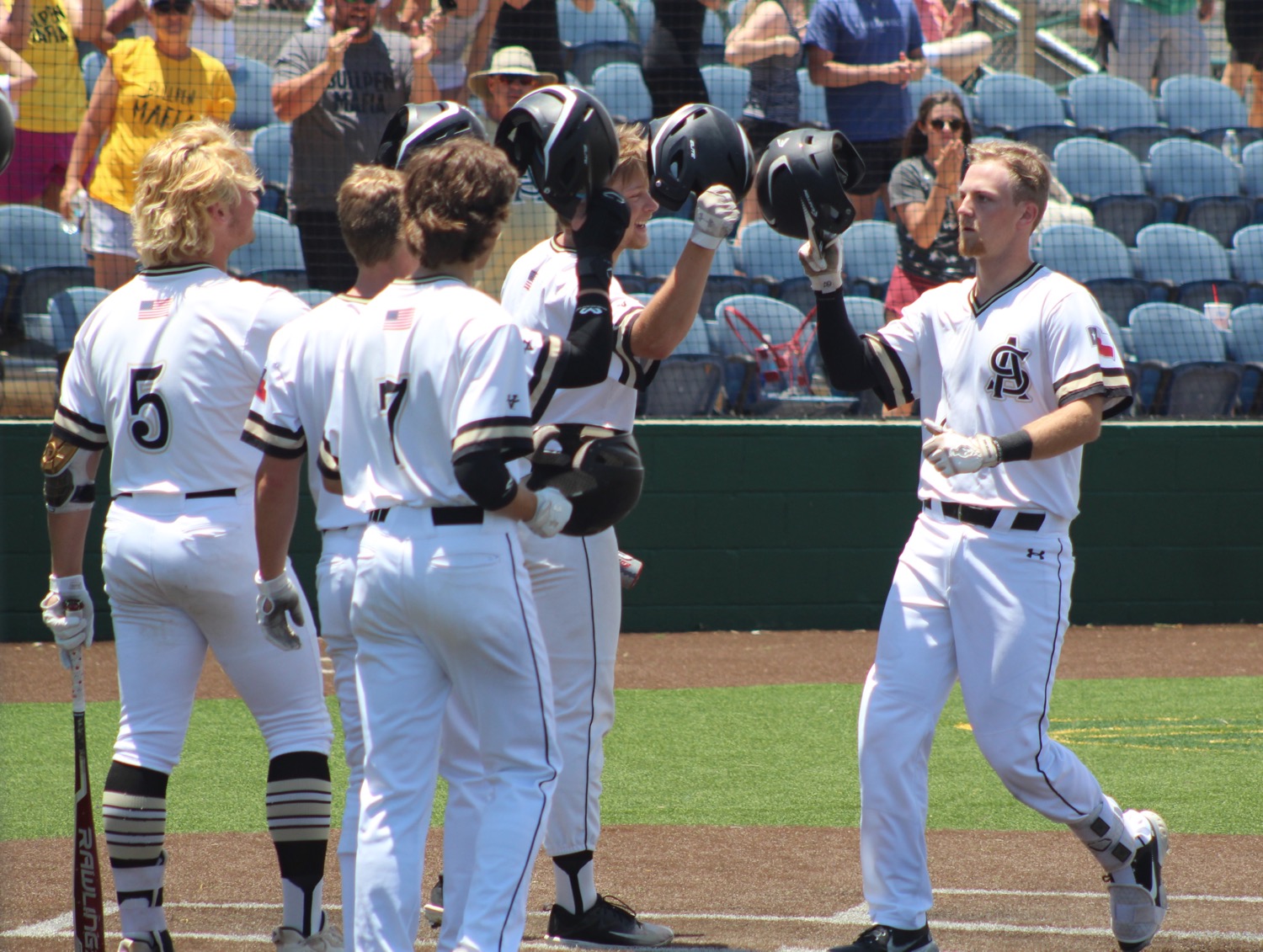 Amarillo High’s Cayden Phillips is congratulated by his teammates after hitting a grand slam in the first inning against Aledo in Game 2 of the Region I-5A final Friday at Christensen Stadium in Midland. [Michael Bauer/ For Press Pass Sports]

MIDLAND— In two games of their Class 5A region final series with Aledo, the Amarillo High Sandies have had only one inning in which they’ve scored more than one run.

And that inning is the reason they’re playing Saturday – and why they’re only one win away from the state tournament.

Riding a first-inning grand slam by Cayden Phillips, Amarillo High beat Aledo 6-3 in game two Friday afternoon at Christensen Stadium to tie the series at a game apiece. That forces a third game at Christensen at noon Saturday, with the winner representing Region I at next week’s state tournament in Round Rock.

However, the Sandies put the first six hitters on base against Aledo starter Carter Shands, chasing him from the game, but not before a towering grand slam to left field by Phillips made it 4-2 and gave Amarillo High the lead for good.

“I was in a lot better mood at the end of the first inning than the half of it,” AHS coach Randon Johnson said. “You just don’t know at this point. It’s the same way with game three. We’re going to be in a deal where every pitch is going to be a big one.”

An RBI single by Nolan Garcia and a sacrifice fly by Zack Harrison gave Aledo (30-10-2) a 2-0 lead against Amarillo High starter Tristan Curless.

But the Sandies erased that rather quickly with the biggest offensive burst of the series so far. Walks to Jake Maynard and Davien Berry and a bunt single by Bryson Slaughter loaded the bases for Phillips, Amarillo High’s most productive power hitter of the postseason.

Phillips delivered like a cleanup hitter should, blasting the second pitch from Shands well over the left field fence to clear the bases and give the Sandies the lead.

“After I hit it when I touched second I thought ‘Our guys are gonna get hot’ because when one person gets hot in the lineup to make things happen we all follow,” Phillips said. “I was just proud of my team getting back after it.”

Nate Haws had an RBI single off reliever Ethan Jaques to drive home Jett Johnston and stretch the lead to 5-2, as the Sandies sent sent 10 batters to the plate.

That definitely settled down Curless. The senior left-hander didn’t necessarily have his best stuff, but other than a towering solo homer to right by Creed Willems which cut it to 5-3 in the fifth, the Bearcats didn’t get to Curless after the first inning.

“(The Bearcats) are definitely a really good hitting team,” Curless said. “We know that’s how baseball works. Any team can come back at any moment. We didn’t really hit as well as we wanted to but our defense allowed us to keep that lead and stay in the game.”

Amarillo High got some insurance with an unearned run in the bottom of the sixth to make it 6-3 before Aledo made things a bit uncomfortable in the top of the seventh.

Max Belyeu led off the inning with a single off Curless before he got Parker Stegall to fly out to center for the first out. However, Curless issued two walks to load the bases and put the tying run on first.

Harrison then lined one toward the middle, but shortstop Jake Maynard speared it diving to his left and beat courtesy runner Gabe Baker back to the bag at second for a double play to end the game. It was a fitting way to end a game without an error.

“You see how they feed off of each other,” Johnson said. “Jake makes a big play to end the game right there. It goes back to the guy gets on the mound and hits his spots. It all tumbles down from there and that’s what’s going to get us through (game three) too.”

Johnson indicated that sophomore right-hander Johnston will likely get the call to start on the mound in game three.