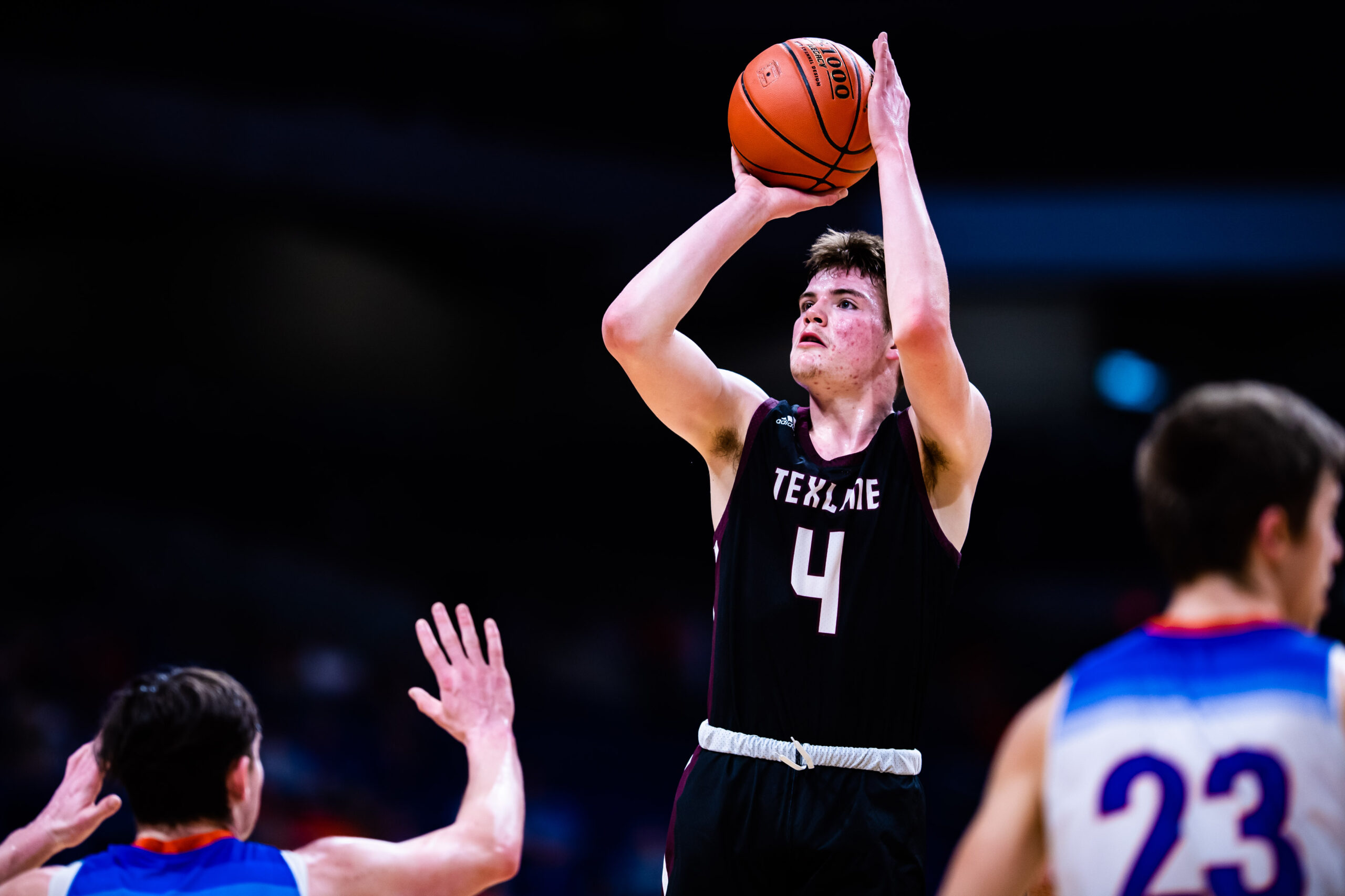 Texline’s Willy Luther knocks down a 3-pointer with 11 seconds left to lift the Tornadoes to the Class 1A state championship past Slidell, 54-53, in San Antonio’s Alamodome on Friday. [Matthew Smith/ For Press Pass Sports]

Will Luther wasn’t going to let a fourth-quarter drought stand in his way of becoming a Texas high school basketball legend on Friday at the Alamodome.

Despite losing a 12-point fourth-quarter lead, Luther hit the go-ahead three-pointer with 12 seconds left and Slidell couldn’t get a final shot off as the Tornadoes beat the Greyhounds, 54-53 in the Class 1A state championship.

“I was trying to tie it so we could go into overtime, but the defense collapsed and my defender had too much momentum so I let it go and it felt good on the release,” said junior Will Luther, who was voted MVP with 21 points, 10 rebounds, three blocks and three steals. “It’s crazy, especially in the 100th year of the UIL. I watched our boys win it in 2015 and I wanted to get one my entire life.”

Texline, which was ranked No. 4 in the state, secured its second title in program history by beating the No. 1 Greyhounds, who won state in 2019 and reached the tournament in 2020 before it was canceled from COVID-19.

“Outstanding,” said Texline coach Coby Beckner. “Team of destiny. They’ve been resilient all year long. I love them and am so proud of them. Willy hit some big shots down the stretch, but it was a complete team effort. So happy for the kids and community.”

Texline (26-4) seemed to do no wrong with a 44-32 lead through three quarters, but then the Tornadoes couldn’t buy a shot in the fourth as Slidell (29-4) stormed back to take the lead.

After back-to-back Slidell layups, the Greyhounds’ Brock Harwell drove to the rim, made the shot and was fouled to make it 44-38 with 6:45 left. Another Harwell basket and a three from Jeri McCasland pulled Slidell within one two minutes later.

Senior Colton Luther broke the drought with a layup to bring Texline within two at the 1:18 mark. The Tornadoes had missed their first seven shots of the fourth quarter. But Slidell couldn’t ice the game from the charity stripe, going 2 of 6 before a Will Luther three to trim the Slidell lead to 50-49 with 38 seconds left.

Harwell made three of his next four free throws sandwiched in between a Will Luther jumper to put Slidell ahead 53-51 before Luther’s final heroics.

“Fourth quarter was a good indicator that it was pretty tough. We were on 44 forever. They were defending, being physical and taking us to the hole,” Beckner said. “We’re pretty young and our youth started to show a bit, but we settled down. Slidell coaches are outstanding. They do a fantastic job. But we had a little luck, earned that luck and deserved that bit of luck. Our kids have high character. They play the right way and live the right way.” 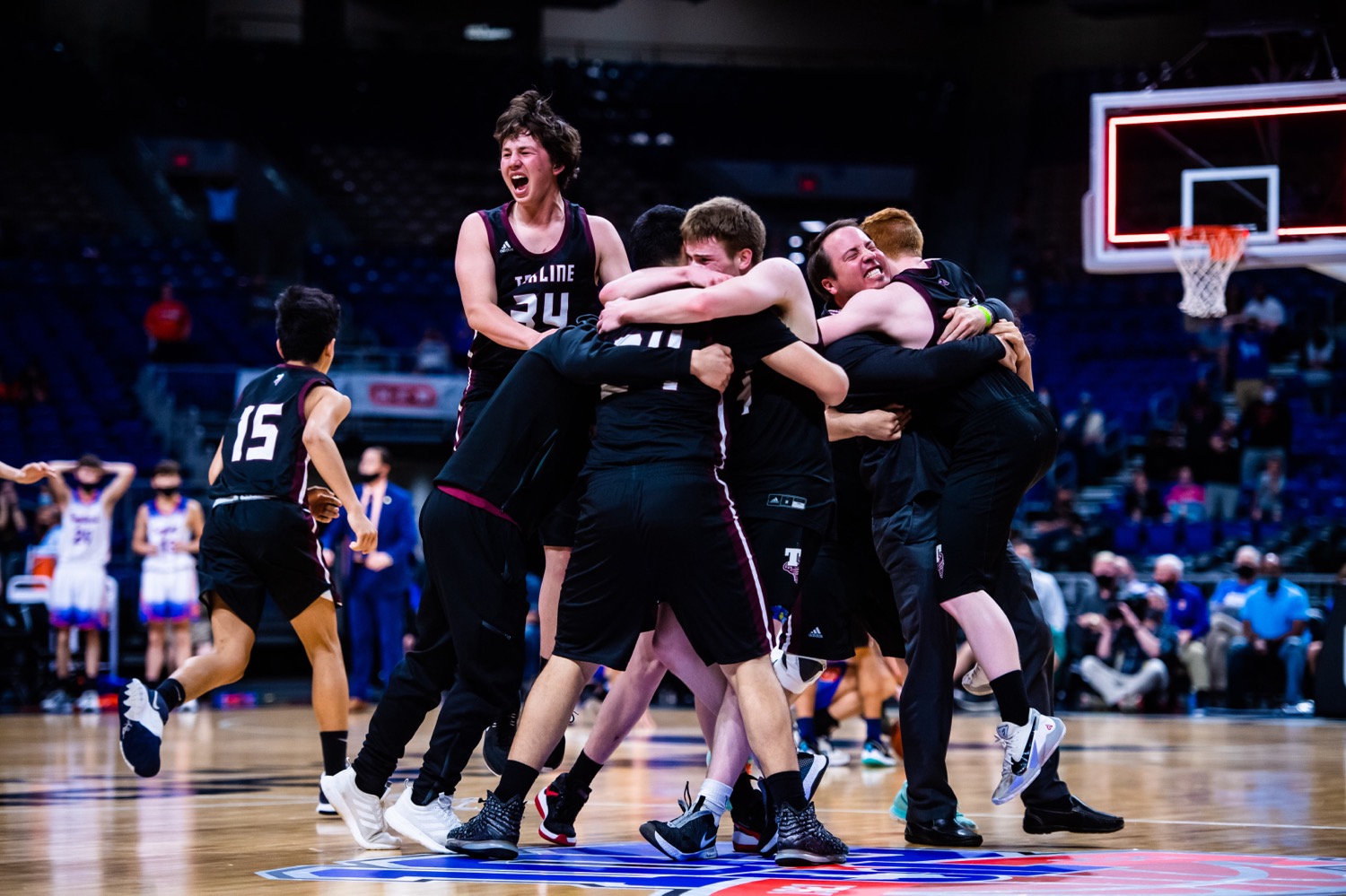 Texline opened the contest with the first four points and seven of nine. Stratton Potter got a layup in the paint and Will Luther’s fadeaway at the free-throw line gave the Tornadoes an early 4-0 lead.

Potter added a three-pointer that grew the margin to 7-2 at the 5:35 mark of the first quarter.

Slidell answered with an 8-1 run. Luttrell’s three from the right wing pushed the Greyhounds in front at 10-8 with 3:13 left in the opening period.

But the Tornadoes defense would hold Slidell scoreless to close out the quarter. A Luther three and Noel Lozano short jumper to beat the buzzer had Texline leading 13-10 after the first.

Texline extended its run to 8-0 on an Elias Espino three to open the second quarter. The lead trimmed to 18-16 after a Slidell three from Harwell and the Tornadoes would go scoreless for the next four minutes.

During that span, Slidell grabbed an 20-18 lead on a pair of Easton Vanover free throws with 3:06 to go in the quarter, but a minute later, Texline went ahead 21-20 on Potter’s second trey of the half.

Potter added his third triple late and the Tornadoes went into halftime with a 25-23 advantage.

The lead ballooned to its largest at 39-30 following back-to-back layups by Will Luther and Lozano that forced a Slidell timeout with 4:02 left in the third.

“Colton broke the ice in the fourth and then I could see it in Willy’s eyes. Give him the ball and get out of the way,” Beckner said. “But kids contributed leading up to it. Potter and Elias, and Angel Herrera took some big charges. Noel battled and has carried us through some playoff games. Collectively it was the guys, the staff and the fans.”

Harwell led all scorers with 23 points while Luttrell chipped in 17 and seven rebounds.

Potter scored 11 for Texline. Colton Luther scored only two points, but registered 13 rebounds and nine assists. The Tornadoes went 21 of 52 (40.4%) from the field and 10 of 22 from behind the arc. The Greyhounds went 5-17 on threes and were plus-14 from the stripe, but missed 10 attempts.

“It’s cool to be a part of school history. It’s great to see the community come together for us. I woke up today and had tons of texts from people happy and proud we were here,” Colton Luther said. “We’ve been dreaming of this since I was in the sixth grade and Will was in the fifth grade. We watched our boys in 2015 win state and since then it’s been a dream for us to win it and here we are.”