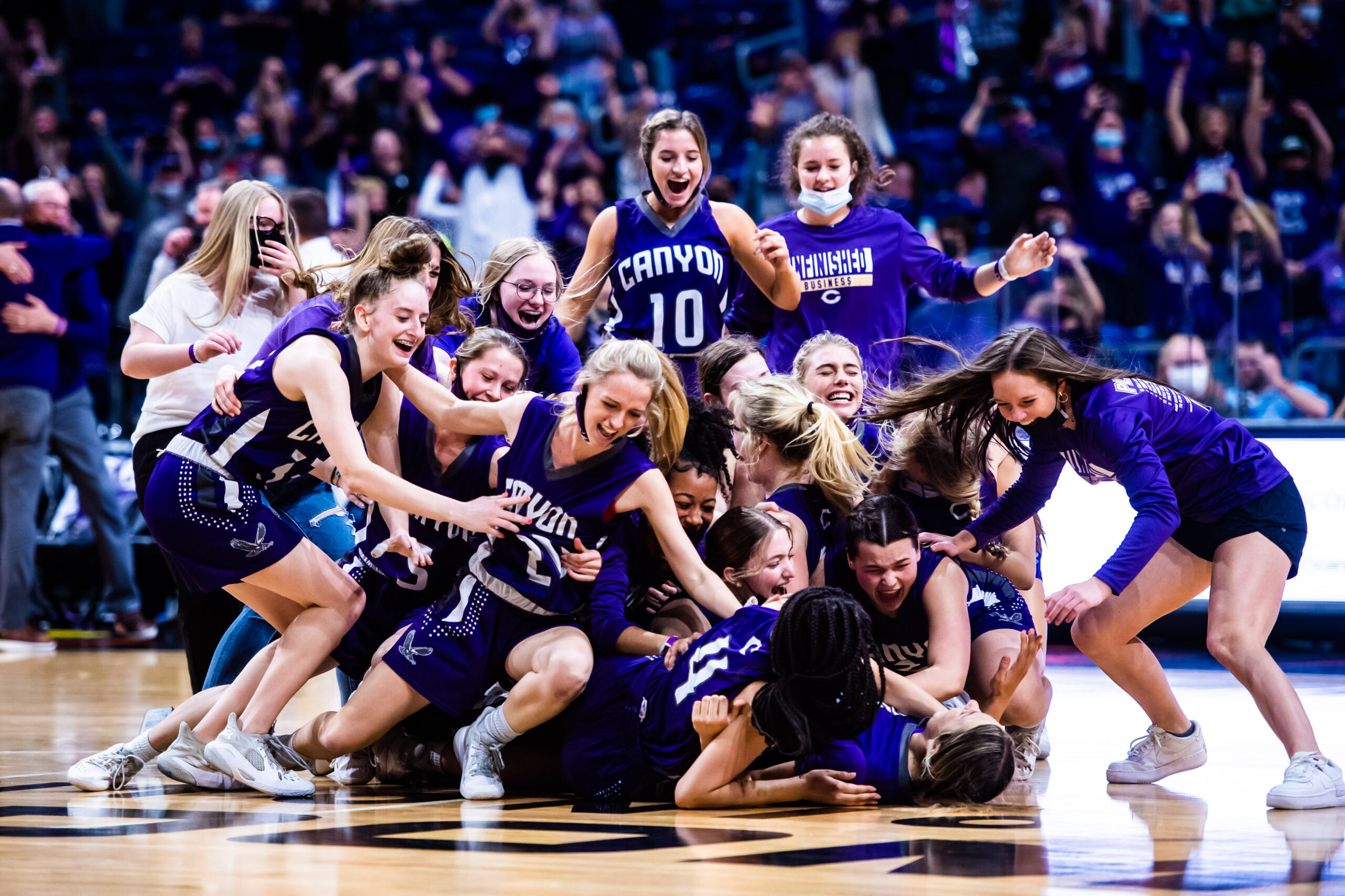 The Canyon Lady Eagles celebrate after a thrilling, 56-55, win against Hardin-Jefferson to capture the UIL Class 4A state championship Thursday in San Antonio’s Alamodome. [Matthew Smith/ For Press Pass Sports]

A familiar name in a new place still yielded the

same result in the same critical situation for the Canyon Lady Eagles on Thursday afternoon.

And it meant that coach Lombard got the Lady Eagles their 20th state championship.

Only this time it was coach Tate Lombard on the sideline and Canyon spoiling another team’s perfect season. It was pure tradition.

In a tight game against the No. 1 ranked undefeated team in the state, No. 2 Canyon didn’t settle for second-best status in the Class 4A state championship game against Hardin-Jefferson at San Antonio’s Alamodome. The Lady Eagles quickly erased a four-point deficit in the final 90 seconds on back-to-back 3-pointers by Kenadee Winfrey and Zoey McBroom to take the lead for good and hold on for a 56-55 victory.

It completed a smooth first-season transition for Lombard, who took over the reigns of the Lady Eagles (31-1) from his legendary father Joe, who won 13 state titles in 35 years at Canyon. And in family tradition, the Lady Eagles never panicked.

“We just kind of stayed calm,” Tate Lombard said. “We jumped into a press and we made two big plays to get steals and followed up with some threes. It was amazing how quickly it turned.”

Befitting a state championship matchup between the top two teams in the state entering the game with one loss between them, neither team ever held much of an advantage. Hardin-Jefferson (29-1) had the game’s biggest lead at 16-11 in the first quarter.

Molly Beavers scored on a layup with 1:58 left in the game to give the Lady Hawks a 52-48 lead. After the Lady Eagles lost the ball on a turnover, a 20th state championship seemed in question.

But Canyon’s Chloe Callahan, who led the Lady Eagles with 17 points and was the game’s MVP, stole the ball and passed to Winfrey, who hit a 3-pointer to cut it to 52-51. Callahan then made another steal 12 seconds later and passed to McBroom, who hit a three to give Canyon a 54-52 lead with 1:17 left.

“I’m really speechless because it was such a great game,” Callahan said. “I still don’t even feel like it was real. I knew we just had to make big plays and finish through.”

After a defensive stop, Canyon got the ball back and with 28 seconds left Taylor Thomas hit a pair of free throws to make it 56-52. Those were huge, because with two seconds left, Ashlon Jackson hit a 3-pointer for Hardin-Jefferson, leaving the Lady Hawks a point short.

“What a heck of a game,” Lombard said. “Hardin-Jefferson is just a great team talentwise. No lead ever felt safe but you never felt like you were out of it. I’m just very proud of our kids effort.”

Jackson, who has committed to Duke, had a game-high 27 points, nobody else for Hardin-Jefferson scored in double figures. Thomas had 12 points for Canyon.

It wouldn’t be a state championship for Canyon without the customary tough defense, and the 55 points the Lady Hawks scored were a season low for them.

“Sometimes you tip your hat,” Hardin-Jefferson coach Mike Fogo said. “I thought we had some great defense some of the time but (the Lady Eagles) made the play. They made a couple of more plays in the end.”

For seniors like Callahan and Winfrey, they now join great names from Canyon past as state champions. For Winfrey, it’s especially gratifying after missing her entire sophomore season with a torn ACL.

“It feels unbelievable,” Winfrey said. “Just to end our senior season is a great feeling. These teammates are my family and I can’t imagine any better a feeling than walking off with a state championship.”