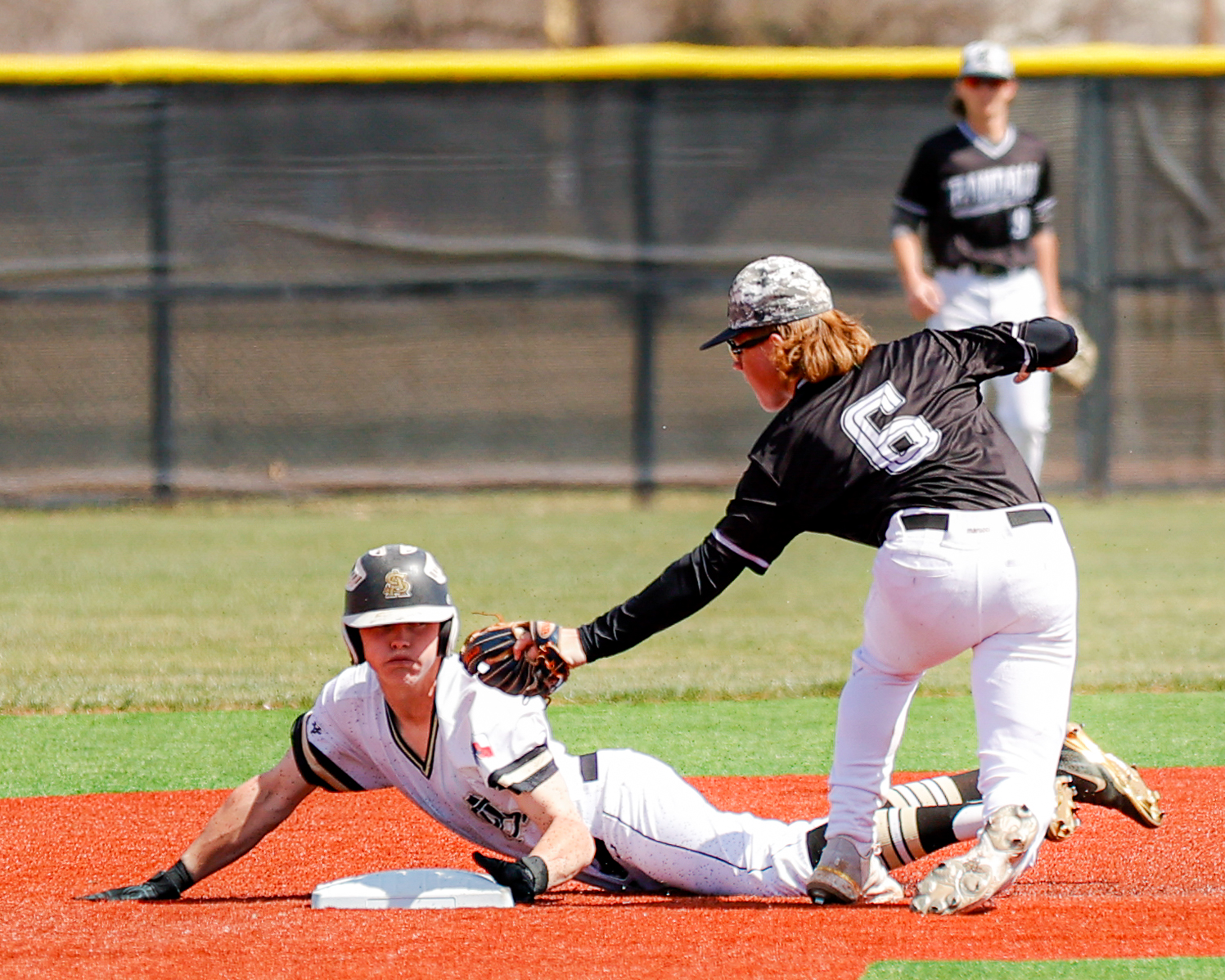 Amarillo High’s Will Maynard slides safely under Randall Payton Bush’s tag during a District 3-5A game Saturday at the AHS Baseball Complex. [Tom Carver/ Press Pass Sports]The first chapter of the District 3-5A baseball installment of the Battle of Bell on Saturday afternoon was full of the kind of atmosphere which makes city rivalries so compelling.

So it wasn’t surprising that it came down to the very end when Amarillo High hosted Randall at Sandie Field or that the player who ultimately decided the game was only on the field for two pitches.

AHS relief pitcher Jacob Ferro came on with two outs and two runners on base in the top of the seventh inning to record the final out of the inning on one pitch to preserve a tie. Then with two outs and a runner on third in the bottom of the inning, Ferro singled off Randall reliever Dylan Cheyne to bring home Max Milligan with the winning run and give the Sandies a thrilling 10-9 victory.

The win left Amarillo High as the district’s only unbeaten team in the very early going of the schedule, as the Sandies are 2-0 in 3-5A. They opened district with a 6-4 win over Plainview on Friday and are 11-5 on the season.

Randall (8-10, 1-1) opened 3-5A by crushing Palo Duro 19-0 on Friday, and the Raiders carried that momentum into Sandie Field, scoring two unearned runs in the top of the first to take the lead. But that could hardly be expected to last on a windy day.

“The word to the guys after the top half of the first was that two runs was probably not going to win the game today,” said AHS coach Randon Johnson in a major understatement. “The wind was blowing out like it was with these two teams out there so it just kind of evolved from there. They took shots, we took shots and luckily we were at home at we had the hammer there at the end and we needed every out we could get but we made the most of it.”

Amarillo High took a 3-2 lead in the bottom of the third as Bryson Slaughter had an RBI double and Jett Johnston (the winning pitcher against Plainview) gave the Sandies their first lead of the day with a two-run double. That set the tone for the rest of the game.

Both lineups took advantage of the conditions as at least one team scored in each inning after that. The sixth inning was the best example of that.

AHS led 7-5 after pinch-hitter Hadley Cox singled up the middle on an 0-2 pitch to bring home two runs in the bottom of the fifth. But Randall’s A.J. Lucero tied the game with a towering two-run home run to center, and error brought home two more runs to give the Raiders a 9-7 lead.

In the bottom of the inning, though, the Sandies tied it 9-9 on a two-run homer by Cayden Phillips to about the same place Lucero hit his.

Randall appeared primed to take the lead in the top of the seventh against Amarillo High reliever Sandler Needham and the Raiders had runners at second and third after Needham committed a balk. Needham threw two balls to Cayden Eason and was pulled for Ferro. Eason hit Ferro’s first pitch to center field, where Davien Berry caught the ball to end the inning and keep the game tied.

“I had no doubt that I would come through for my team,” Ferro said. “That was the main priority. It wasn’t always pretty.”

Cheyne retired the first two batters in the bottom of the seventh before AHS leadoff hitter Max Milligan lined a pitch the other way to left-center. It was an easy double, but Milligan wasn’t satisfied with that, as he rounded all the way into third and just beat the outfield throw for a triple.

“Rounding first I was looking at coach Johnson and I was still hauling butt down the line and I saw him wave me in and I have trust in my coach so I took it and it was worth it with the triple,” Milligan said. “I was just thinking a base hit, nothing special and not have to be a hero and hit a home run.”

Slaughter was intentionally walked in order to pitch to Ferro. It seemed like a prudent move by the Raiders since Ferro came to the plate cold off the bench.

But Ferro took Cheyne’s pitch over second base for a base hit, allowing Milligan to trot home with the winning run.

“I had a feeling they would walk Bryson,” Ferro said. “Bryson’s a great batter and you try to do whatever you can to win. There isn’t much scouting on how I hit so I understand it 100 percent. My goal was just to go up there and if I find a pitch I like, hit it and win it for my team.”

Caprock used a big third inning to take a seven-run lead over crosstown rival Palo Duro and held on for an 8-6 victory at PD, giving the Longhorns their first win of district play.

The Dons scored four runs in the bottom of the sixth to cut it to 8-6 but got no closer.

Tascosa made the district’s longest road trip and didn’t come back home happy, as the Rebels fell victim to a big inning and lost at Plainview 7-3.

Things looked promising for Tascosa (7-8, 1-1) early, as the Rebels tied it 1-1 on an unearned run in the top of the fifth. But things fell apart in the bottom of the inning, as Plainview scored five runs on six hits to take a 6-1 lead.

It was a return to earth for the Rebels, who were hitting on all cylinders in their win over Caprock a day earlier. In that game, Koben Yarbrough drove in four runs, Josh Splawn brought home three and Logan Nance drove in two.