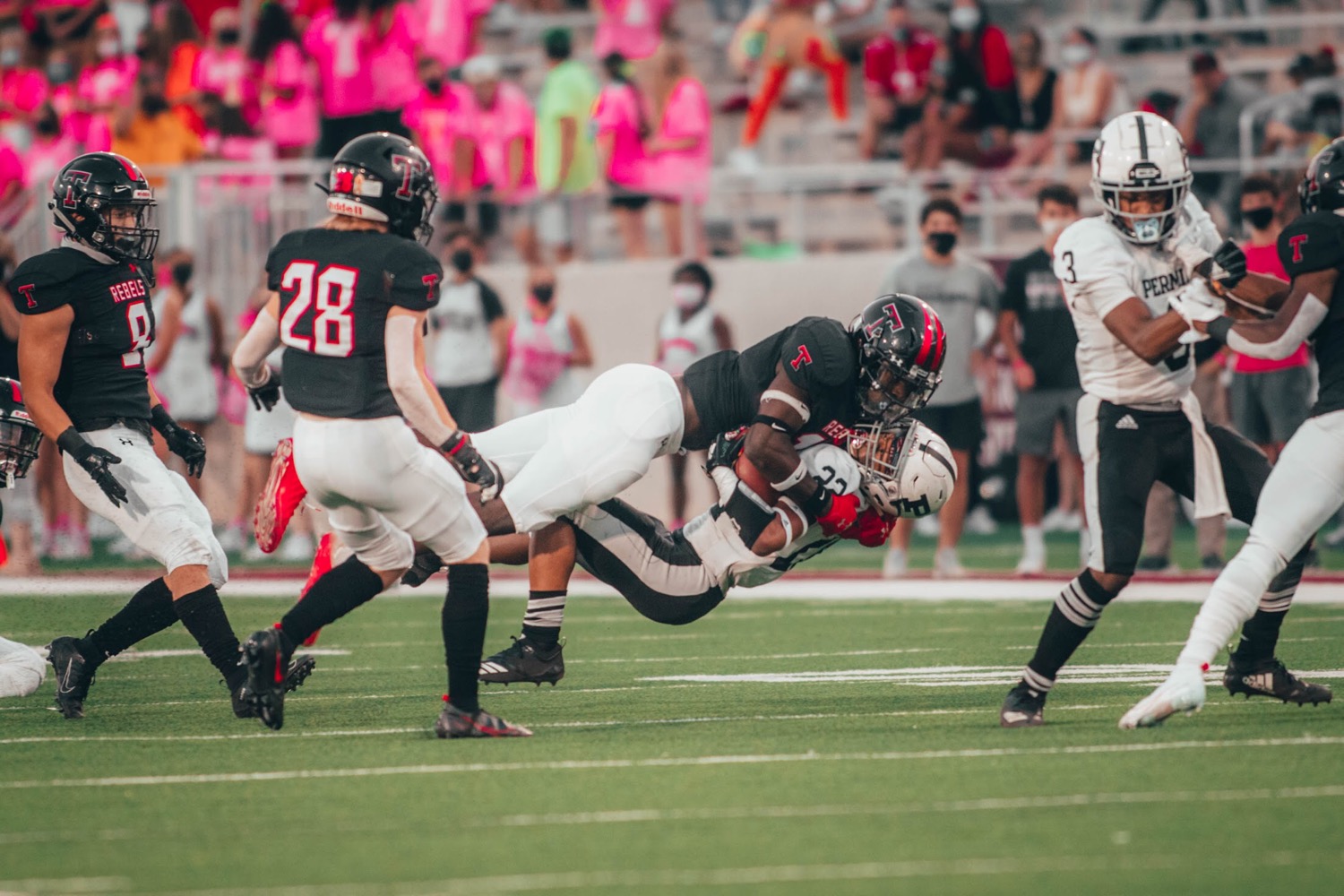 It’s what Tascosa did without the ball on offense that set the stage for the Rebels convincing victory over former District 2-6A rival Odessa Permian taking a 40-18 victory Friday night at Buffalo Stadium.

Riding on the backs of two pick sixes from the defense on top of a 95-yard kickoff return from the ever explosive Major Everhart the Rebels cruised to a nondistrict victory.

Tascosa jumped out in the first quarter 8-0 as quarterback Harper was pressured in the end zone making an ill-advised attempt at a shuttle pass that Tascosa linebacker Darius Sanders stepped in front of the first of two Rebel interceptions for a touchdown.

Holding an 8-0 lead into the second quarter the Tascosa offense went to work behind a powerful ground attack and QB B.T. Daniels, grinding out a 14-play 80 yard drive that ended with a Logan Nance TD from 9-yards out extending their lead to 15-0.

On the following possession the Rebels derense came through once again when L’Travion Brown stepped in front of the Terry pass and went housed a 60-yard interception for a second defensive touchdown of the half putting the Rebels on top 21-0 with 3:51 left in the half.

Holding a 21-6 into the third quarter, the Rebels took the opening drive of the third quarter and quickly scored on a Daniels scamper from 25-yards making it 28-6.Even when Permian tried to cut into the lead, Tascosa had an answer. Up 28-12, the extremely speedy Everhart put this one away using his blazing speed ob a kickoff going 95-yards untouched for the score.

Everhart didn’t touch it much on offense but did have two carries for 55 yards including an interception on defense.

Tascosa did what its offense did best and rushed the ball for 293 yards on the evening. The Tascosa defense also intercepted Mojo four times.

The 2020 Battle of Bell Street will not be forgotten for years to come.

After losing senior quarterback Will Maynard to injury, AHS was set to go with junior Brock Wade for his first career start against the Raiders. Waded found a rhythm early and showed off his touch with a 8-yard touchdown to Jameson Garcia to tie the game,7-7.

Randall went back 14-7 off a 35-yard touchdown reception from Jacob Tijerina.

Injuries continue to decimate the sandies as Wade left the game with an undisclosed injury leaving the signal duties into the hands of inexperienced hands Mason Graham. Graham delivered in the middle of the third quarter finding senior Cayden Phillips for a 90-yard touchdown to tie the game back up at 14-14. AHS snagged the the momentum later in the quarter on a 2-yard pick-six from Brock Ewing in what gave the Sandies their first lead of night at 21-14 in the middle of 3rd quarter. The Raiders answered with Jared Gallegos 14 yard run to tie the game at 21. The Sandies would drive down to the 28 yard line and Luke Laminck would put the kick through the uprights as time expired and it was celebration time on the field.

Dumas does it all to beat The Rock

Stephenville, Dumas may have came out sluggish for most of the first half against Caprock.

That was until the Demons woke up scoring 27 unanswered points on the way to a 40-14 win against Caprock at Dick Bivins Stadium on Thursday.

Dumas (5-1 overall) found ways to score through all three phases of its football team scoring three offensive touchdowns, returning two interceptions for a TD, and returning a punt for a score.

A competitive yet sloppy first half saw the Longhorns (1-2 overall) in the contest thanks to big pass plays from quarterback Joziah Balderamma to Eli Martinez of 60-yards and Dustin Carruth of 34-yards.

However, mistakes were Caprock’s downfall with Dumas taking full advantage in the opening four minutes of the third quarter.

Balderrama threw his second of four interceptions, and his second pick six of the game to Roberto Ruiz who went back 26-yards for a touchdown. On the ensuing possession Dumas returner Jacob Mares returned a punt for a 46-yard score, then after a 3-and-out, the Demons drove down the field in four plays capped off by a Mares 18-yard TD reception, and all of a sudden it was 40-14 with seven minutes left in the third.

Mares had a big night rushing for 118 yards including the two touchdowns. Quarterback Spencer Williams threw for 137 yards with three scores and rushed for 77.