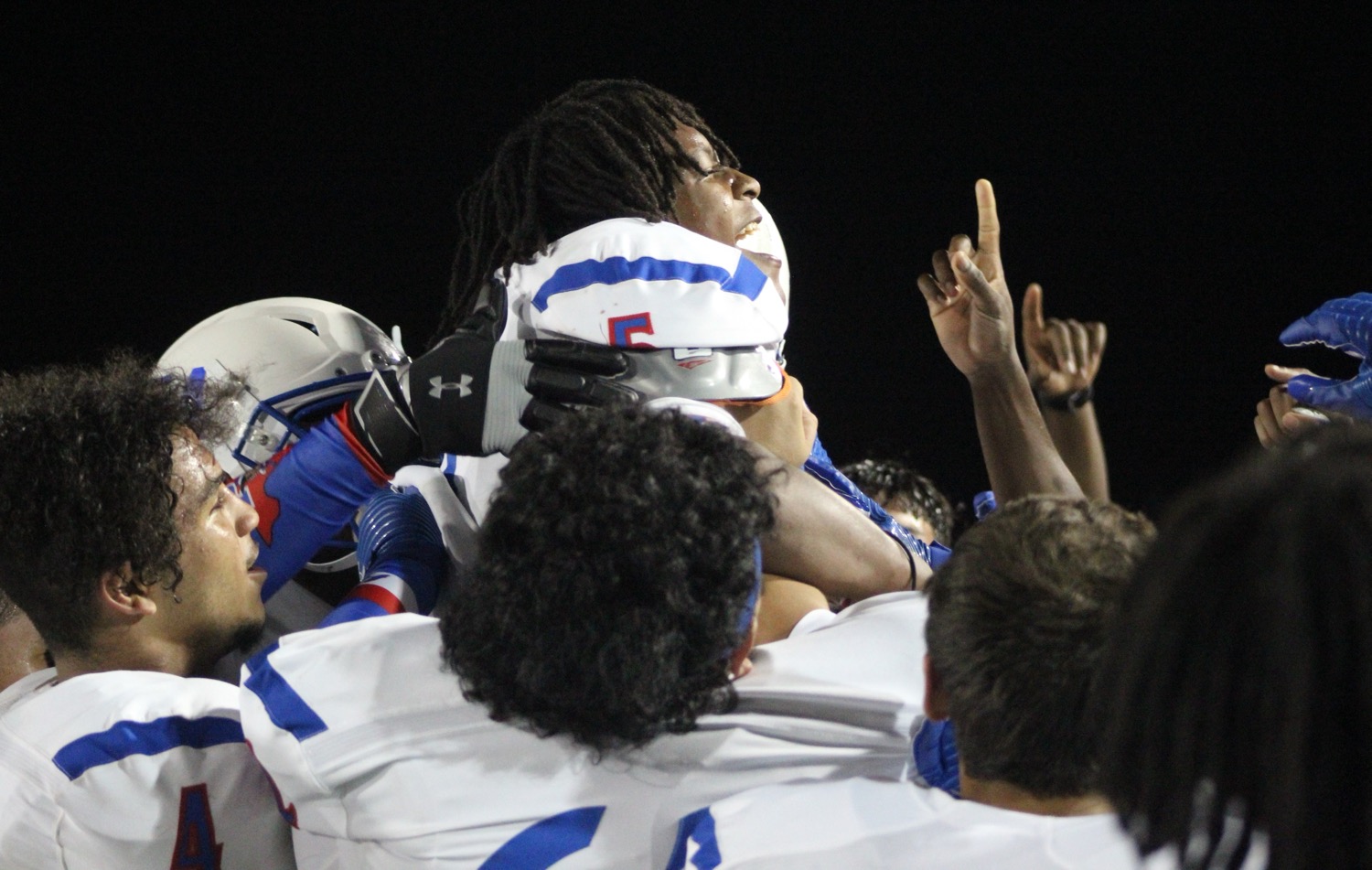 SEMINOLE— Palo Duro head coach Eric Mims is usually not at a loss for words.

But he made an exception Friday night following his first win as the Dons’ head coach.

Palo Duro survived a 34-26 overtime win over Seminole Friday at Wigwam Stadium in its season-opening contest.

With the victory, the Dons moved to 1-0 for the season, recording their first season-opening win in over five years.

“I’m so proud of these kids because I was asked why in the world would I take this job,” Mims said who came in as an offensive coordinator at powerhouse Duncanville during the offseason. “Why would I go to a program in shambles and leave a team in the metroplex and this is why. I know what type of kids live here and I know what type of effort they can give if they’re pushed hard and coached hard and have high expectations. … My heart goes out to these kids. They haven’t won a lot in the past. We’re 1-0 after playing against a heck of a Seminole squad. They played well and made some big plays but my guys just kept competing and to God be the glory.”

With the game tied at 26, Palo Duro began overtime on offense.

Kameron Brown scored on an 18-yard run on fourth-and-three and the Dons added the 2-point conversion with a run by running back Tre’sean Monroe for a 34-26 lead.

A pass from Seminole quarterback Blake Flowers fell incomplete on fourth-and-goal to end the game.

“We did some really good things and then we did some bad things,” said Seminole head coach Greg Poyner who was also coaching his first game for the Indians, arriving during the offseason from Pampa. “We just killed ourselves with penalties. It was just penalty after penalty. We had too many penalties. In streaks, we played really well offensively, and then in streaks, we played pretty well defensively. We made some special teams mistakes. It was a typical first game and they made one more play than we did. I’m disappointed with the loss but I’m proud of the way our kids played and I thought we competed.”

Trailing 8-6 at halftime, the Dons started the second half on a promising note, bringing the ball down field and scoring an 8-yard run by running back Tre’sean Monroe giving the visitors their first lead of the night with 8:11 left in the third quarter.

Seminole responded on its next possession, however.

A pass to Curlyer Cramer for a 14-yard completion brought the Indians to the Dons’ 3-yard line.

On the following play, running back Nate Leyva scored on a carry, reclaiming the lead for the Indians.

Seminole’s 2-point conversion pass fell incomplete and the hosts had a 14-12 lead with 4:37 left.

The Dons weren’t down for long and Monroe found the end zone for a second time, scoring on a 54-yard run and Palo Duro managed to get the 2-point conversion on the following play with running back Jereth Estrada carrying the ball in, giving his team a 20-14 advantage at the 3:47 mark.

The Dons’ defense managed to force the Indians to punt and then Estrada added to his team’s lead by scoring on a 33-yard touchdown run. He came up short on the 2-point conversion but Palo Duro had a 26-14 lead with 28 seconds on the clock.

Palo Duro took its 12-point lead into the final quarter.

The Indians then responded on a 6-yard touchdown run by Flowers with 11:40 left in the fourth quarter. The 2-point conversion fell incomplete with Seminole trailing 26-20.

Seminole’s defense gave the hosts a crucial score with defensive back Andrew Banman returning an interception for a 28-yard touchdown. Seminole’s 2-point conversion run came up short and the game was tied at 26 with 11:09 left.

The Dons capitalized on numerous Seminole penalties including a personal foul that moved the ball to the Seminole 24-yard line.

A holding call pushed the Dons back on the following play.

But a couple of runs by Monroe came up short as the Dons brought the ball to the 1-yard line and Arzola was brought down short of the end zone, resulting in a turnover on downs with 4:37 remaining.

Palo Duro forced Seminole to punt out of its own end zone and the Dons took over at the Indians’ 26.

The Dons moved the ball closer to the end zone, while draining the clock.

Lining up in the wildcat formation, Brown was brought down for a loss of 10 yards and an interception on the next play ensured the game would go into overtime where the Dons wouldn’t be denied.

“It says that Seminole is a pretty tough team because they knew what we were doing,” Mims said. “They did a great job. But you find out what kind of team you have when you’re faced with adversity. … I’m proud of my guys for their resiliency and for never quitting. I’m proud of my guys.” 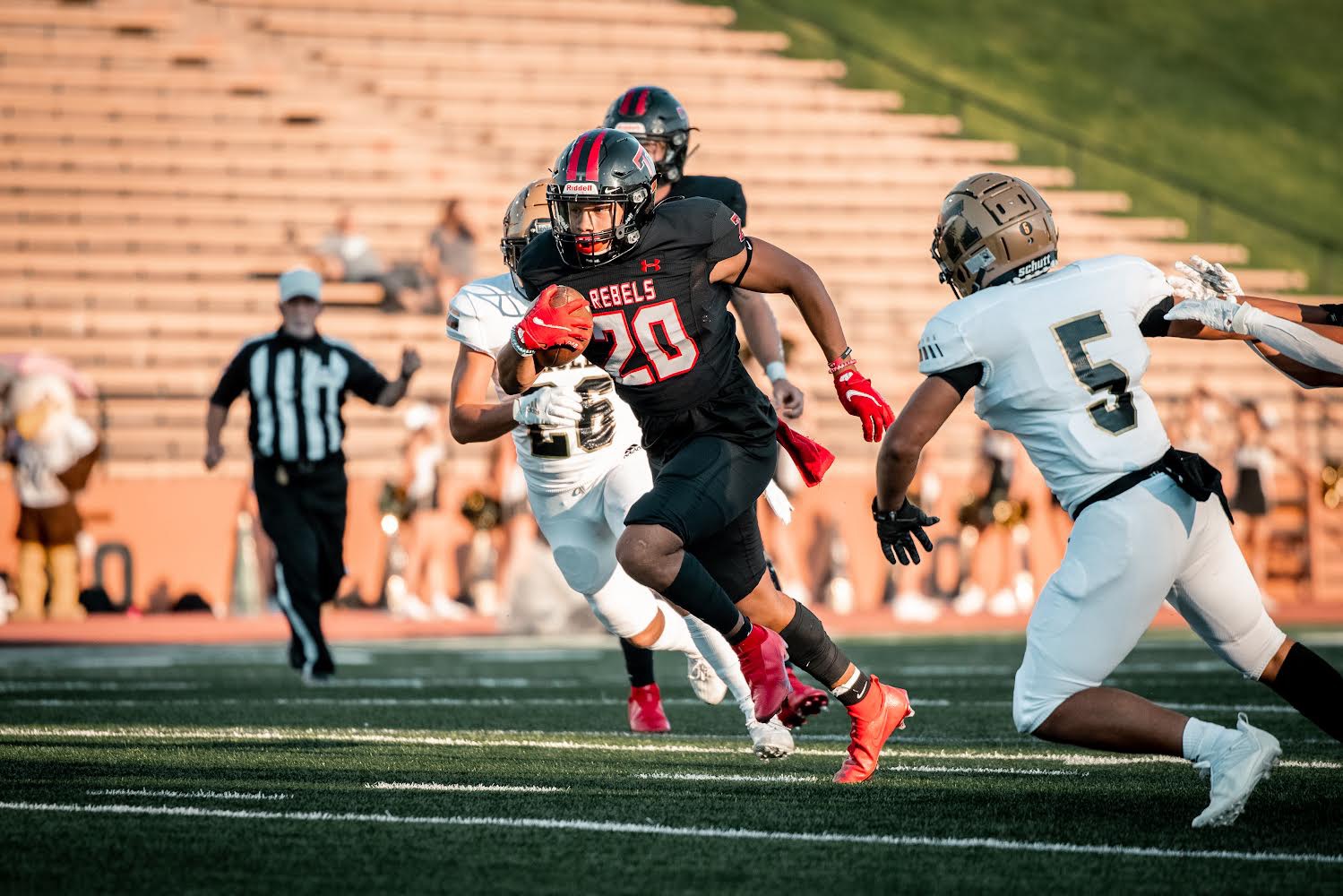 Despite dropping from Class 6A to 5A, Tascosa keeps showing that it’s not intimidated by its former bigger classification, as the Rebels jumped out to an early lead at Dick Bivins Stadium and cruised past 6A Abilene High to open the season.

Tascosa led 26-0 before the end of the first quarter in taking control of the game early. Quarterback BT Daniel ran for the first two touchdowns to set the tone.

Big plays were the theme for the rest of the quarter. Jayden Whiteside returned a fumble 50 yards for a score and Major Everhart scored on a 42-yard run to make it 26-0, which as it turned out was all the Rebels would need.

The victory puts Tascosa coach Ken Plunk three wins away from 100 for his career. 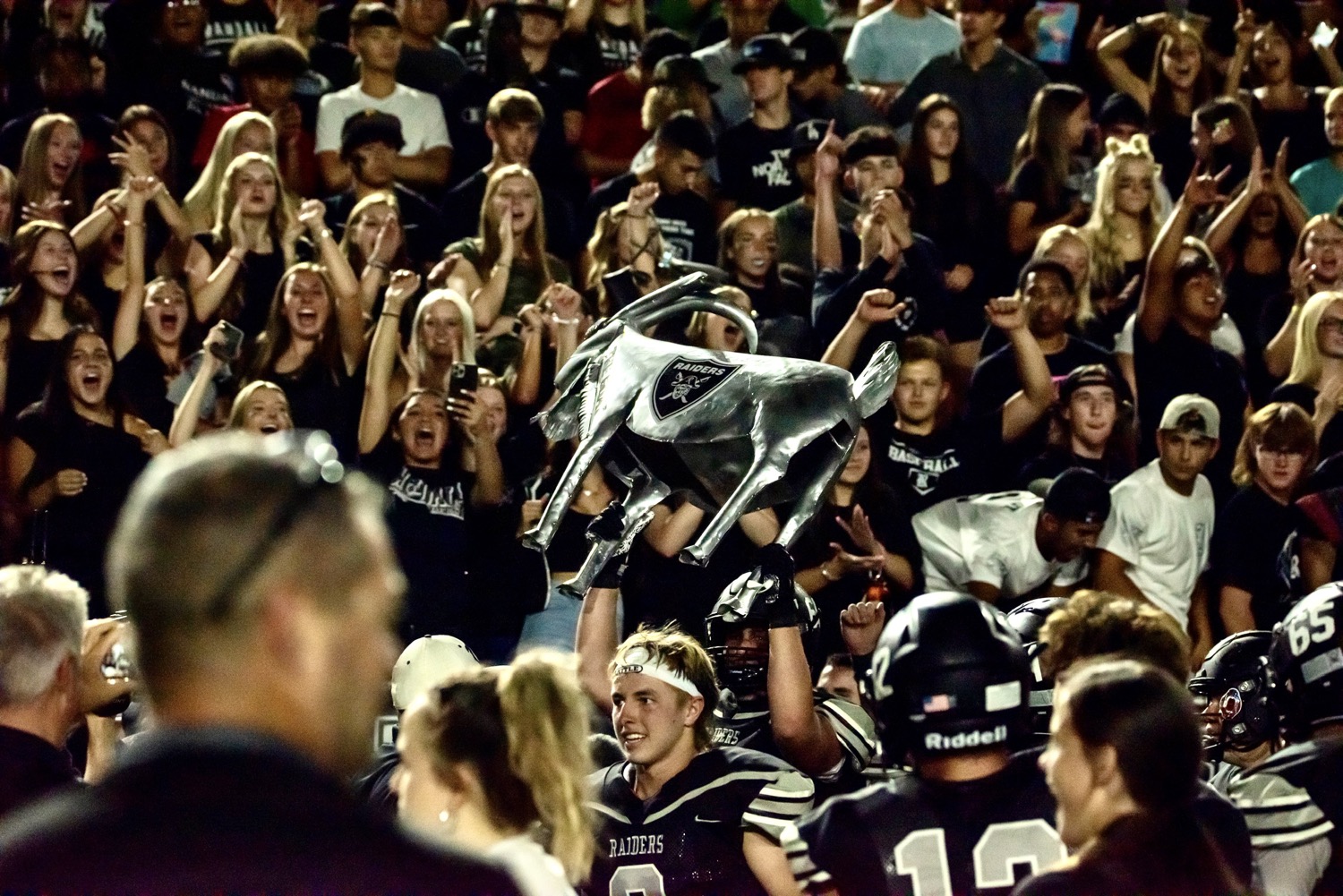 After the cancellation of last season’s Canyon ISD rivalry game due to COVID-19, Randall and Canyon gave fans one to remember at Happy State Bank Stadium to open the season, as Randall scored a touchdown midway through the fourth quarter for the winning points.

Randall got in front early, taking a 13-0 halftime lead on two Amel Hazdzisabic field goals and a 6-yard touchdown run by Jordi Hernandez. But Canyon tied the game at 13 in the first minute of the fourth quarter on a 5-yard scoring pass from Christian McGuire to Derrek Clements.

With just under six minutes left, Randall reclaimed the lead on a 22-yard scoring pass from Braxton Burd to Isayah Hernandez to make it 20-13. The Raiders held on defensively the rest of the way.

Burd was a dual threat at quarterback, going over 100 yards both passing (114) and rushing (101). Hernandez led the Raiders with five catches for 79 yards.

After six decades of competing as Midland Lee High School, Legacy High played its first varsity football game against Amarillo High at West Texas A&M’s Buffalo Stadium to open the 2021 season. The Sandies found out painfully, regardless of the name, that a Legacy can be painful.

Amarillo High was dominated on both sides of the ball from the outset by a Legacy which looked like some of the best Lee teams of old, as the Sandies fell 37-7 to open the season in the first of two straight games against Midland ISD schools, as they host Midland High in their home opener next week.

That presents the Sandies with a second chance to make a good impression against an MISD program. AHS coach Chad Dunnam hopes it will be better than the first.

“It wasn’t a good first game,” Dunnam said. “In the first half we weren’t ready to go. I can say I didn’t have our football team prepared. I think we were working hard but we didn’t realize when you can’t evaluate your team against someone else, you don’t know where you need to go.

“We kind of tricked ourselves into thinking we were pretty good and that was against our good. Our good wasn’t good enough against (Legacy’s) good.”

Friday night marked the first time in 2021 that the Sandies lined up against a team other than themselves. That’s because their scheduled scrimmage against another Permian Basin program, Odessa Permian, was canceled due to weather.

Now they know the work they need to put in over the next three games before starting District 2-5A Division I.

Considering that Legacy outgained the Sandies by a 527-187 margin, that leaves a lot of room for improvement on both sides of the ball. Amarillo High never got into an offensive rhythm aside from a third quarter touchdown drive and the Sandies hurt themselves with two first half turnovers.

Legacy, meanwhile, was about as balanced as could be offensively in the first half in rolling to 362 total yards and a 30-0 halftime lead.

In his first varsity start at quarterback, Marcos Davila looked like a seasoned vet. Davila completed his first six passes, the first five of which went to Chris Brazzell and completed 15-of-19 for 175 yards and a 23-yard touchdown to Nate Suttle early in the second quarter.

But almost as if to remind everybody that these were still the Running Rebels, Legacy’s Makilyn Young was still the linchpin of the offense. Young started the scoring with an 8-yard touchdown to conclude Legacy’s first possession, and finished with 247 yards and four touchdowns on 31 carries.

“Makilyn’s got a couple of offers but he’s good enough to play for any Power Five conference in the country,” Legacy coach Clint Hartman said. “We’ve always said we want to feed him the ball and see what happens and it opens up the passing game.”

In a span of 3:24 early in the second quarter Legacy effectively put the game away, scoring 20 points for a 27-0 lead. After Nate Suttle’s 23-yard scoring catch from Davila and Young’s 58-yard scoring run, the Rebels took advantage of a fumble recovery deep in Amarillo territory and Young scored on a 4-yard run to cap the outburst.

The Sandies got on the board in the third quarter, getting deep into Legacy territory on a 61-yard completion from Brock Wade to Braize Mitchell. That set up a 3-yard scoring run by two-way lineman Erik Gray, giving future opponents something to ponder the rest of the season.

It was one of the few times all evening that the Sandies seemed to take the game to the Rebels physically.

Wade played most of the evening at quarterback and played respectably, completing 13-of-21 passes for 150 yards with no interceptions. Connor Haelzle had a nice varsity debut at receiver with six catches for 62 yards.

Defense took centerstage in the season’s first game at Dick Bivins Stadium on Thursday night, as Hereford made a pair of first quarter touchdowns hold up to beat Caprock and make the debut of Hereford coach Adam Naron a successful one.

Both teams struggled offensively, as neither one totaled 200 yards on the night (Caprock had 198 yards to Hereford’s 188). It was a rough night for Caprock sophomore quarterback Kadrian Hernandez making his first start, as he threw for only 55 yards and was intercepted twice by Hereford’s Jose Duque in the first half.

Duque’s first interception set up the Whitefaces in Caprock territory, and on fourth down, Hereford quarterback Gerardo Garcia scrambled for a 24-yard touchdown and a 7-0 lead. Later in the quarter, Garcia hit Tommy Suarez on a 26-yard scoring pass to make it 13-0.

But that was it for the Herd offensively. Hereford was able to stop Caprock several times as the Longhorns often got the ball in favorable field position deep in Herd territory, but the Longhorns hurt themselves with four turnovers.

Caprock’s lone score came late in the third quarter as Hernandez scored on a 1-yard run to cut it to 13-7. But the Longhorns were unable to mount another serious scoring threat the rest of the way.