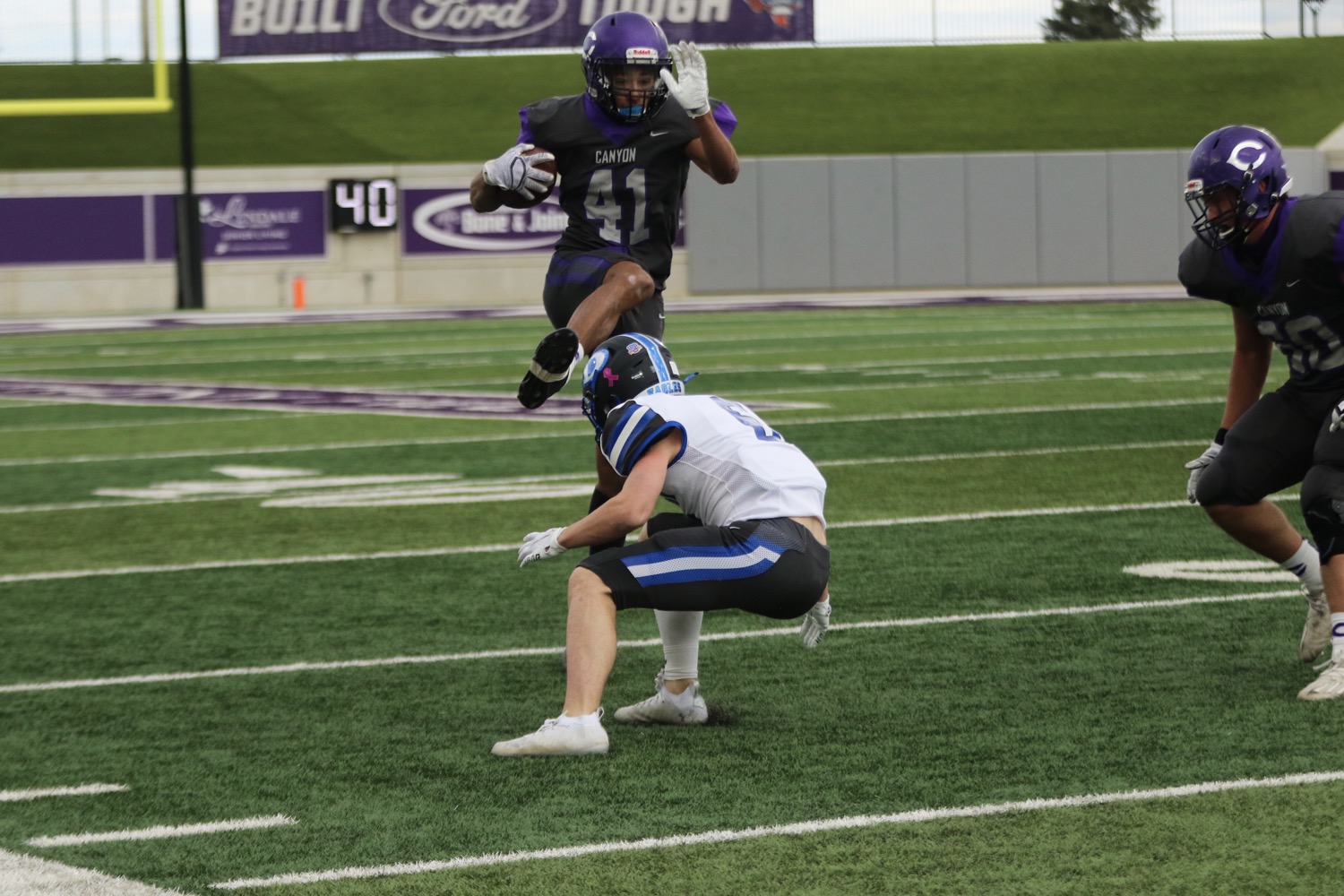 Canyon’s Dario Bressler (41) hurdles a Decatur defender in the second quarter of a Class 4A Division I regional semifinal contest Friday on Anthony Field at Wildcats Stadium in Abilene. [Jasinia Frausto/ For Press Pass Sports]

From start to finish Canyon dominated Decatur in every way possible, soaring to a 35-7 victory in a Class 4A Division I regional semifinal at Anthony Field at Wildcat Stadium in Abilene.

Canyon (11-1 overall) is headed to the state quarterfinals for the first time since 2013 when they square off with District 4-4A Springtown at 7 p.m. Friday at Grande Communications Stadium in Midland.

Canyon’s defense put on its third masterful performance of the postseason, limiting Decatur (7-6) to 17 yards at half, and 163 total yards for the game.

Through three postseason wins Canyon has given up only 14 points.

On the offensive side, Canyon built a 21-0 halftime lead, building that advantage to 28-0 heading into the fourth quarter.

Quarterback Jay Defoor put together a solid performance going 15-of-23 for 205 yards with two passing touchdowns, and running for a TD on a bootleg. Senior wide out Jack McKay made seven of those catches for 121 yards and a score. But it was the Canyon ground game that wore down Decatur the most. Senior Brody Cook chewed up 90 yards on 25 carries with two touchdowns, Rafe Butcher toted the ball five times for 63 yards and a 26-yard score, followed by Dario Bressler who added 90 yards on 17 carries.

Springtown’s offense came alive with 17 points in the fourth quarter to prevail the Porcupines past Dumas, 24-14, in a very competitive Class 4A Division I regional semifinal in Big Spring on Thursday.

Springtown (11-2 overall) eliminates Dumas from the playoffs for a second straight year.

The Porcupines are now set to face Canyon (11-1) in the state quarterfinals at 7 p.m. Friday in Midland.

Both defenses were the story of this contest for three quarters of Thursday’s Thanksgiving Day clash. The game was tied, 7-7, at half and stayed that way into the fourth quarter when Springtown finally broke the tie on a 10 yard touchdown pass from quarterback Camden Chesney to Andy Behle, giving the Porcupines a 14-7 lead with 7:39 left.

Springtown scored again on its next drive going up 21-7, however, the Demons stayed in the contest when quarterback Spencer Williams hit Bryan Mendoza cutting the deficit, 21-14 with 2:26. But the Demons defense didn’t get Springtown off the field in the final minute as Porcupines kicker Brendan Hall nailed a 40-yarder for a 24-14 lead, and the insurance needed to secure the win.

Dumas, the District 3-4A champions, end a great year at 10-2 overall. It’s the second straight year the Demons reached the regional semifinals. Despite the loss, Williams completed 14-of-21 passes for 234 yards with two touchdowns. Juan Romero snagged seven catches for 140 yards and a TD.

Springtown’s quarterback Camden Chesney went 11-of-23 but did throw for three touchdowns on 159 yards passing.