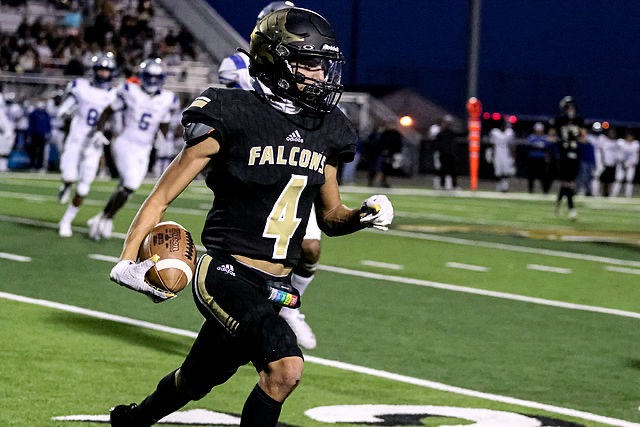 Bushland’s Kash Bradley is one of the top players to watch in the Texas Panhandle this year. [Ben Jenkins/ Press Pass Sports]

1. Bushland: They’ll be a lot of new faces flying around the football for second-year coach Josh Reynolds, however, wide receiver Kash Bradley and his teammates expectation of a district championship doesn’t change.

2. River Road: This may be a gamble putting the Wildcats in the second spot of the preseason predictions. Coach Bryan Welps graduated his son, Lance, who was a do-it-all standout now playing at West Texas A&M. With a new challenge presents new opportunity for River Road as running back Elliott Brown picks up the slack as a team leader.

3. Dalhart: Since head coach Joey Read came to Dalhart his teams have always played with a physical, hard-nosed mentality. Expect this season to be exactly the same with a roster of up and coming players.

4. Littlefield: Administration wasn’t for coach Jimmy Thomas who retired after five years at Bushland following the conclusion of the 2019 season. Now he’s back, and guiding Littlefield into a new air-raid era. It will be a transition, but Thomas knows how to win.

5. Muleshoe: Second-year head coach Jason Richardson and his team showed improvement last season. Richards can only be optimistic that in 2021, the path to a great tradition of Mules football is underway.

Will this contest be for the outright district title? Only time will tell, but a lot of eyes will be on Falcons Stadium when former Bushland coach Jimmy Thomas brings his Wildcat team into face his protégé Josh Reynolds and the high-flying Falcons. Thomas led Bushland to a 47-26 record over six seasons making six straight playoff appearances.

1. Canadian: The small school blue blood will look much different with the loss of 15 seniors that led the Wildcats to their fifth state championship a year ago. Even as a young team, don’t expect much of a drop off in Wildcat land. As the saying goes, “to be the man, you have to beat the man.”

2. Childress: This may be the best Bobcat teams in last few years. QB Collin Bishop surrounded by a wealth of talent are back eager to dethrone Canadian from the top spot.

3. Spearman: The Lynx are loaded at the skill that includes Division I prospect Brenen Thompson and receiver Brayden Klafka. Matchups will be scary for any opponent they face.

4. Friona: The Chieftains will be a dangerous team for anyone in their path with 15 starters coming back including three-year starting running back Jacob Bautista and QB Bryan Chavira.

5. Tulia: Head coach Steven Coursey made strides with the Hornets program in 2020. There’s no question heading into year two Tulia has playoffs on the mind.

6. Highland Park: There’s talent on both sides of the ball, particularly with running back Adryan Rodriguez, to solidify some optimism and hope for improvement.

7. Dimmitt: Bobcats have brought in hometown favorite Johnny Nino as their new head coach. Nino is a veteran coach with a defensive mind from his days in Clarendon. Nino hopes he can resurge Dimmitt from the past few struggling years.

The showcase game of the Texas Panhandle in 2021 comes on the final week of the regular season. There’s a distinct feeling this isn’t just for the district crown, but will be the first of two meetings in the matter of a month.

The two rivals have had some classic battles over the past few years, however, the Wildcats handled the Bobcats two times a season ago including a 45-14 win in the state quarterfinals.