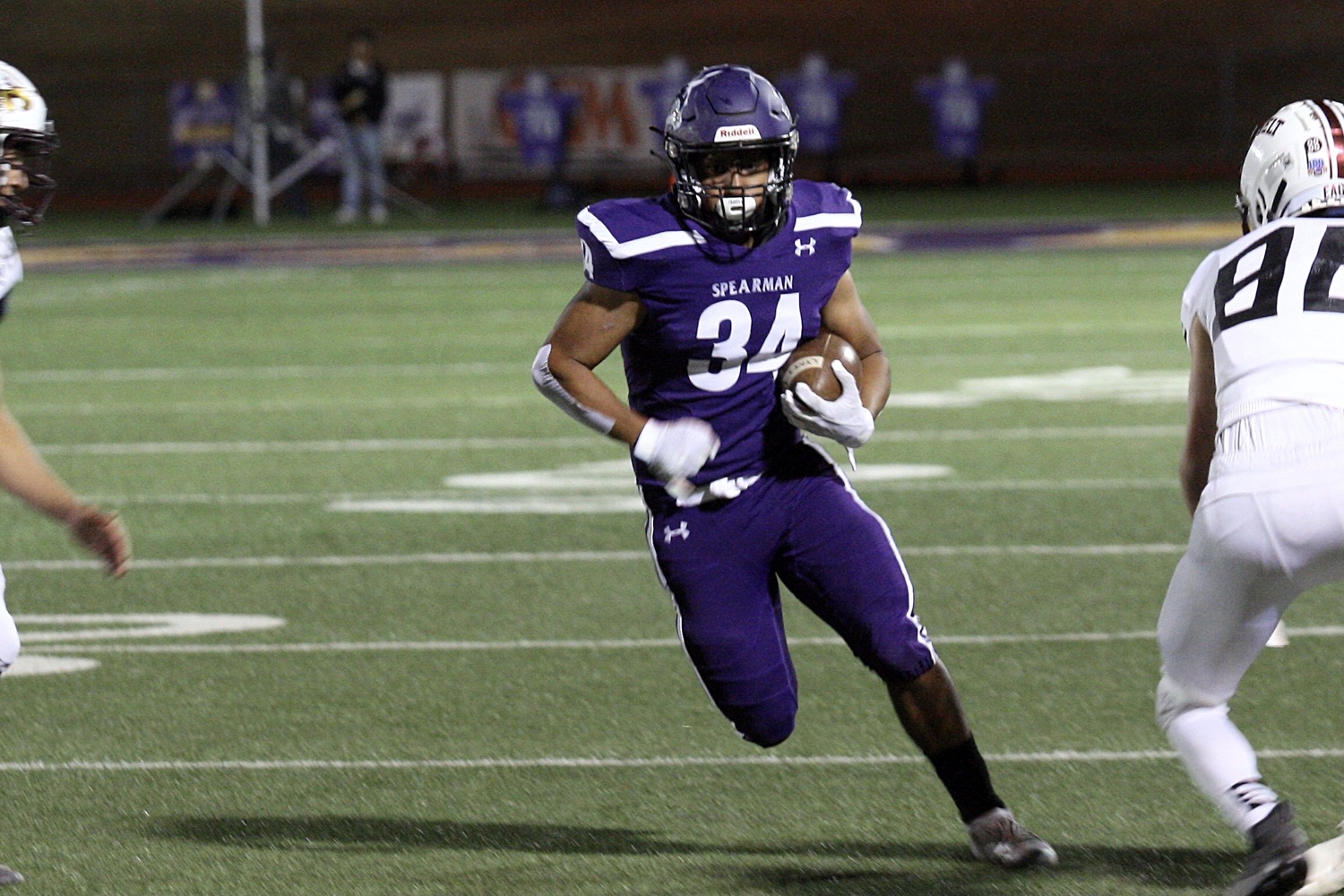 Spearman running back Fabian Hernandez heads up field for a touchdown against Lubbock Roosevelt during a Class 3A Division II bidistrict game Friday at River Road. [Ernie Bowen/ For Press Pass Sports]

Spearman poured on the points to out gun Lubbock Roosevelt in a Class 3A Division II bidistrict game at River Road’s Wildcats Stadium on Friday night.

The Lynx defense had trouble slowing down the Eagles flexbone offense for the majority of the contest, however, the offense picked up the slack. Spearman ran only 32 plays Friday racking up 526 yards, averaging 16 yards per play, scoring nine touchdowns.

Though they never trailed, Spearman had to keep its foot on the gas to keep pushing away from a more than competitive Roosevelt (7-4) squad.

Quarterback Jack Wilkerson was the catalyst behind the impressive offensive showing. The senior completed 9-of-12 passes for 237 yards with three touchdowns, and added 88 rushing yards with another score. Receiver Brayden Klafka and running back Fabian Hernandez showed off their versatility. Klafka,m hauled in two catches for 68 yards with a TD, adding 66 yards rushing and two more scores. Hernandez tallied 87 chewed up 87 yards on eight carries, made two catches for 70 yards with a touchdown.

Childress came-from-behind with 14 unanswered second half points to get past Abernathy in a very competitive Class 3A Division II bidistrict contest in Floydada on Friday.

Childress gained a measure of revenge against the Antelopes after being eliminated in the postseason the past two years.

At halftime it didn’t look if the Bobcats were going to get the job done trailing 21-14. But the defense rose to the challenge in the second half, and the offense did what they needed to. The Bobcats tied it up, 21-21, in the third quarter on a QB keeper from Collin Bishop. In the early stages of the fourth quarter Childress completed the comeback when Bishop found Devron Sims to take a 28-21 advantage with 9:02 left. The Bobcats defense made one final stop in the closing moments. Facing a fourth down and the ball at the Childress 34-yard line, Antelopes quarterback Jess Hoel was flushed from the pocket and tried to deliver a pass but Abernathy was flagged for a lineman down field turning the ball back to Childress with 17 ticks left.

Bishop was superb going 21-of-33 for 303 yards and three touchdowns. Sims had a huge night with eight catches for 119 yards, the eventual game-winning TD, as well as making a key interception late in the game.

Class 3A Division I

The Dalhart Golden Wolves started off postseason on the right foot with a solid 44-14 win over Lamesa in a Class 3A Division I bidistrict matchup at Peoples Bank Stadium in Wolfforth on Friday night.

The Dalhart offense continues to put up points on a weekly basis and Friday night was no different. The Golden Wolves trailed early 8-0, before turning it on for 35 unanswered points to take control. The offense was fueled by a powerful running game. Quarterback Brennan Lloyd led his team on the ground with 140 yards rushing and three touchdowns. He was backed by a heavy helping of Will Moore who ended his night with 109 yards and a score on seven carries. Dalhart’s defense was top tier in this matchup only allowing 197 yards in the game for Lamesa (4-7). 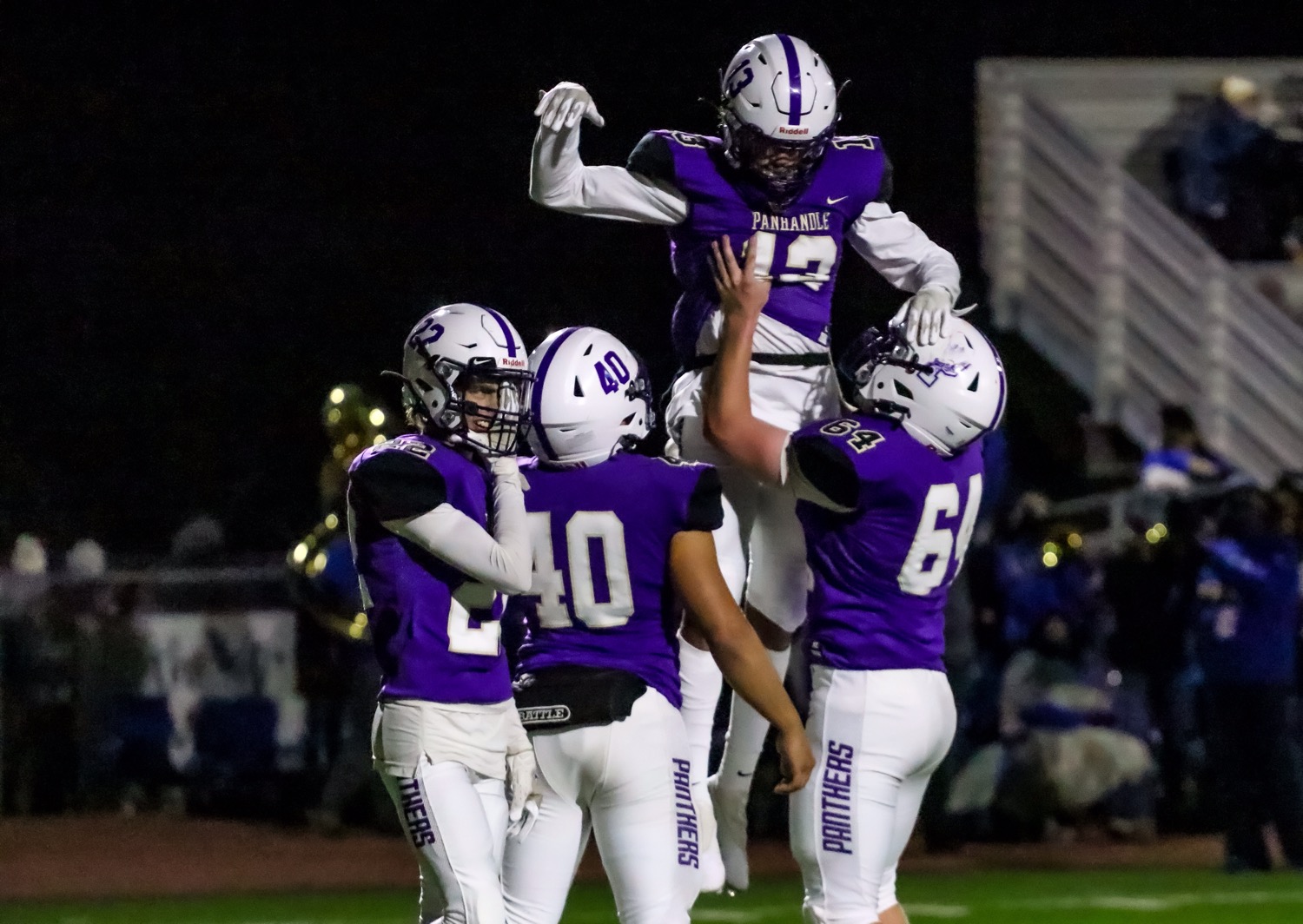 Panhandle receiver Zion Mercer is hoisted by his teammates after a touchdown against Hale Center on Friday. [Ben Jenkins/ Press Pass Sports]

Panhandle pours it on Hale Center

Panhandle jumped all over Hale Center early and never looked back rolling to a 55-7 dominating win in a Class 2A Division I bidistrict matchup at Younger Field in Tulia on Friday.

The Panthers scored before the Owls knew what hit them, building a 14-0 lead at the 8:40 mark of the first quarter. The Panthers offense didn’t stop there. Panhandle put up 48 points by halftime building a commanding 48-7 advantage

The Panthers dynamic quarterback was at it again passing an efficient 15-of-20 for 303 yards and five touchdowns, while also rushing for 64 yards and a score, all in the first half. Zion Mercer was on the receiving end of eight of those passes compiling 128 yards and three scores in the process. The run game was no slouch either as big Landyn Hack toted the rock 15 times for 82 yards.

As impressive as the offense was, this defense matched the effort. Panhandle held the passing game of the Owls to 4-of-14 passing for three yards and forced an interception by Zach Wood.

Panhandle (9-2) looks onto the area round where they will take on San Saba (8-2) at 7 p.m. Friday night in Henrietta.

Vega was firing on all cylinders Friday night in its 54-22 victory against Shamrock in a Class 2A Division II bidistrict clash at Bulldogs Stadium in Borger.

The Vega running game has been a catalyst for the success of the Longhorns this season, but it was the air attack doing damage Friday. Ryan Grawunder, the Vega signal caller, put on a show going 9-of-13 for 220 yards and five touchdowns on the night. Brady Tiemann was the recipient of 2 of those scores racking up 108 yards.

Shamrock finishes it’s season at 5-6, but the record does not show the direction this team is headed in. Vega (9-2) is headed on to the area round for a matchup with Bovina (4-6) at 7 p.m. Thursday night at Happy State Bank Stadium in Canyon.

It wasn’t the prettiest of games by any means but Bovina was able to pull away from Plains for a 19-7 win Friday night in a Class 2A Division II bidistrict game at Todd Field in Shallowater.

Bovina (4-6) advances to face Vega in the area round at 7 p.m. Friday at Happy State Bank Stadium in Canyon. Plains ends its season at 2-8.

Each team turned the ball over four times, with the Mustangs defense forcing three interceptions of Cowboy quarterback Tyler Vargas. Bovina trailed 7-6 after one, but took the lead for good in the second quarter on an Andrew Guevara 28 yard touchdown run. The Mustangs got some much needed insurance in the fourth quarter, putting the game out of reach when QB Cole Emery kept the ball himself for a 25 yard score. Emery ran for 47 yards in the game with two scores, and threw for 53 yards. Darian DeLaRosa tacked on 91 yards rushing on 15 carries.

Support our mission
Previous articleClass 4A Friday playoff roundup: Perryton impresses against Monahans; Dumas survives in thriller
Next articleClass 1A roundup: Follett, Happy and Groom all cruise to next round