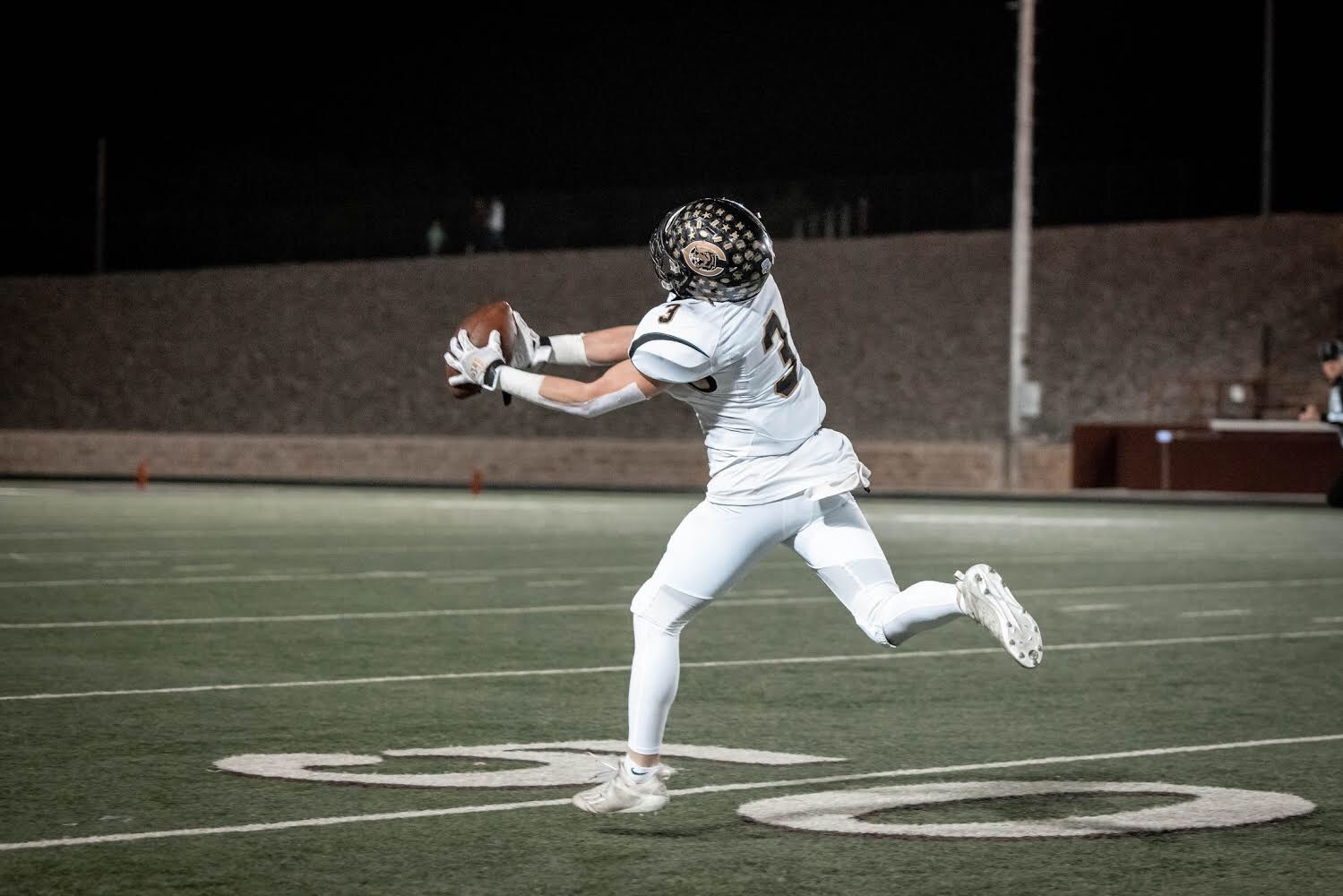 Canadian’s Twister Kelton makes a fingertip catch that resulted in a 76 yard touchdown during a Canadian 56-13 rout of Bangs on Friday night in Vernon. [Trevor Fleeman/ Press Pass Sports]

First-year Bushland head coach Josh Reynolds made the call of his life, and if paid off against Wall in a double overtime thriller that won’t be forgotten tor years to come.

Wall scored to take the lead in the second overtime, Bushland answered, then rolled the dice on a two-point conversion to win the game.

Coleman Junell found Kash Bradley on the two-point pass, and Bushland celebrated a 28-27 win over the Hawks during a Class 3A Division I area round game in Snyder.

Bushland improved to 10-2 and will play Pilot Point (9-3) next week in the regional semifinals at a time and place to be determined.

This game saw so many momentum swings.

Junell found Bradley for a 29-yard TD pass to give Bushland a 14-7 lead at halftime.

It was the first of three TD passes from Junell to Bradley.

Wall running back Brandon Garcia powered his way to a 16-yard TD run midway through the third quarter, tying the game at 14-14 heading into the fourth

With Wall up 20-14 and 2:37 left in the fourth, Bushland scored when Junell completed a fourth-and-11 pass to Bradley.

The extra point was blocked, however, to keep the game tied at 20-20.

Bushland had another chance to win in regulation, but a 38-yard field goal try was wide left as time expired.

Neither team scored in the first overtime.

Facing a third-and-11 from its 26, Bushland again came up with a big passing play — and it’s no surprise that Junell found Bradley in the back of the end zone.

After the 26-yard TD pass, Junell went to Bradley one last time to end the game.

Canadian kept on trucking last night with another lopsided win blowing out Bangs 56-13 in the Class 3A Division II area round on Friday night at Leo Brittain Field Lions Stadium in Vernon.

This game was never close. The No. 1-ranked Wildcats punched in two touchdowns in their first eight plays, scoring on all seven first half possessions to build a 49-6 halftime lead.

Quarterback Joshua Culwell and receiver Twister Kelton were in sync. Up 7-0, Culwell connected on a deep ball that Kelton caught with his fingertips, then took off beating the defender to the end zone for a 76 yard touchdown. Later in the first, Culwell again found Kelton on a bullet over the middle for a 42 yard pitch and catch that gave Canadian a 28-0 advantage. Culwell was stellar going 21-of-28 spreading around seven touchdowns, throwing for 325 yards. Kelton snagged a total of three catches for 129 yards and two TDs, and junior Jake Krehbiel added three touchdowns.

Canadian (11-1) will move to the regional semifinal round and will face No. 7 and unbeaten Idalou (10-0) at 2 p.m. Friday at Happy State Bank Stadium. 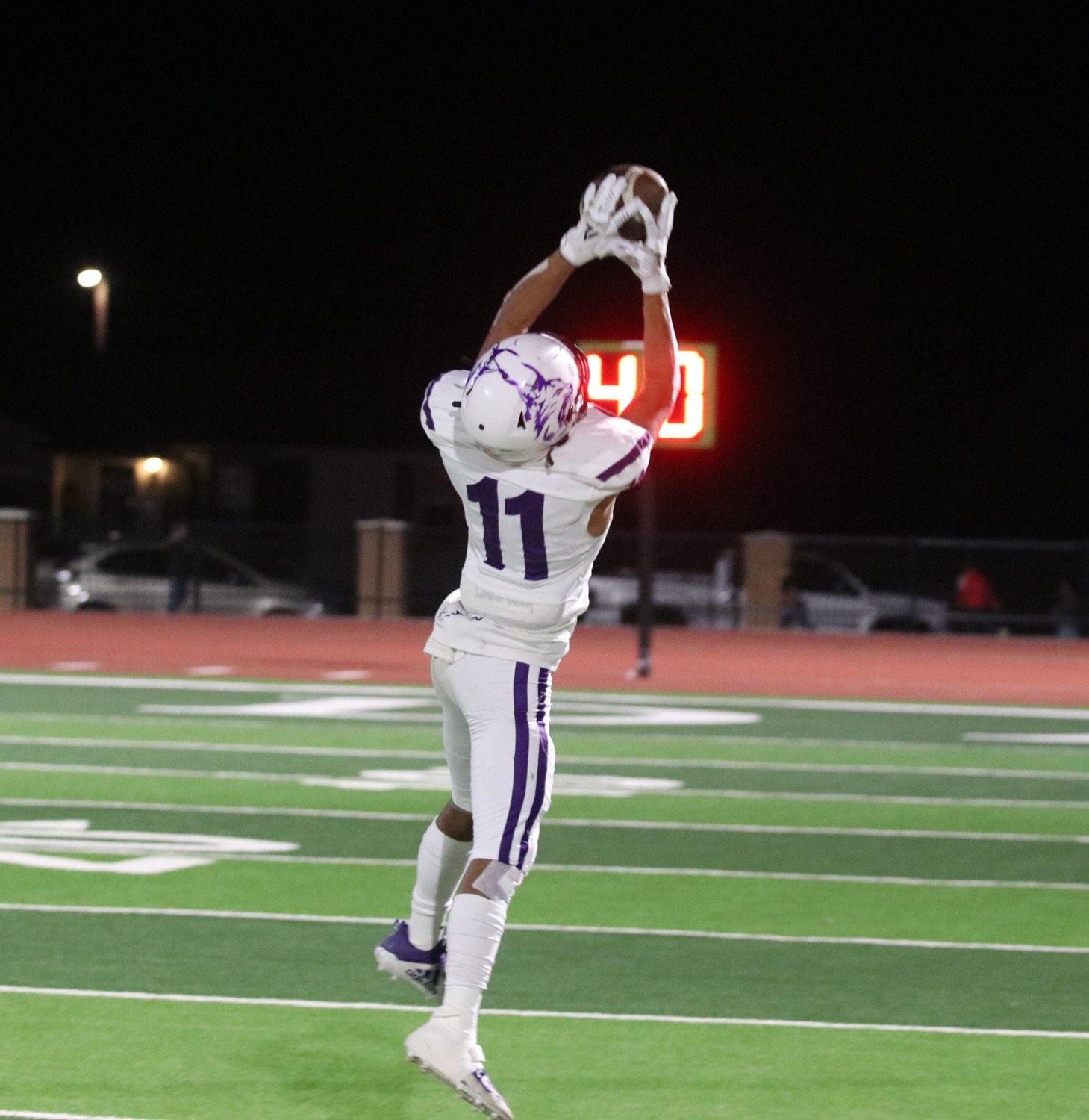 A huge second quarter was the difference as Spearman was able to roll past Ballinger, 35-7, in a Class 3A Division II area round contest Friday night in Floydada.

After a scoreless first quarter, the No. 5-ranked Lynx started clicking on offense behind quarterback Jack Wilkerson and four-star Division I prospect Brenen Thompson. Wilkerson broke the scoreless tie with a 25 yard touchdown scamper. On the ensuing possession, Thompson showed his blazing speed making a catch and out racing the Bearcat secondary 90 yards for a TD, and a 14-0 lead. Thompson was far from done, showing why he has over 30 Division I offers. The 5-foot-11 junior made seven catches for 174 yards and a score, added a rushing touchdown and returned a pick-six 99 yards for his third TD of the game. Wilkerson was 15-of-23 for 264 yards, ran for 70 yards with a combined three touchdowns.

Spearman moves to 11-1 overall and will get a rematch with district rival Childress (9-2) at 7 p.m. at Happy State Bank Stadium in Canyon. The Lynx knocked off the Bobcats, 43-36, in a Week 5 overtime thriller. 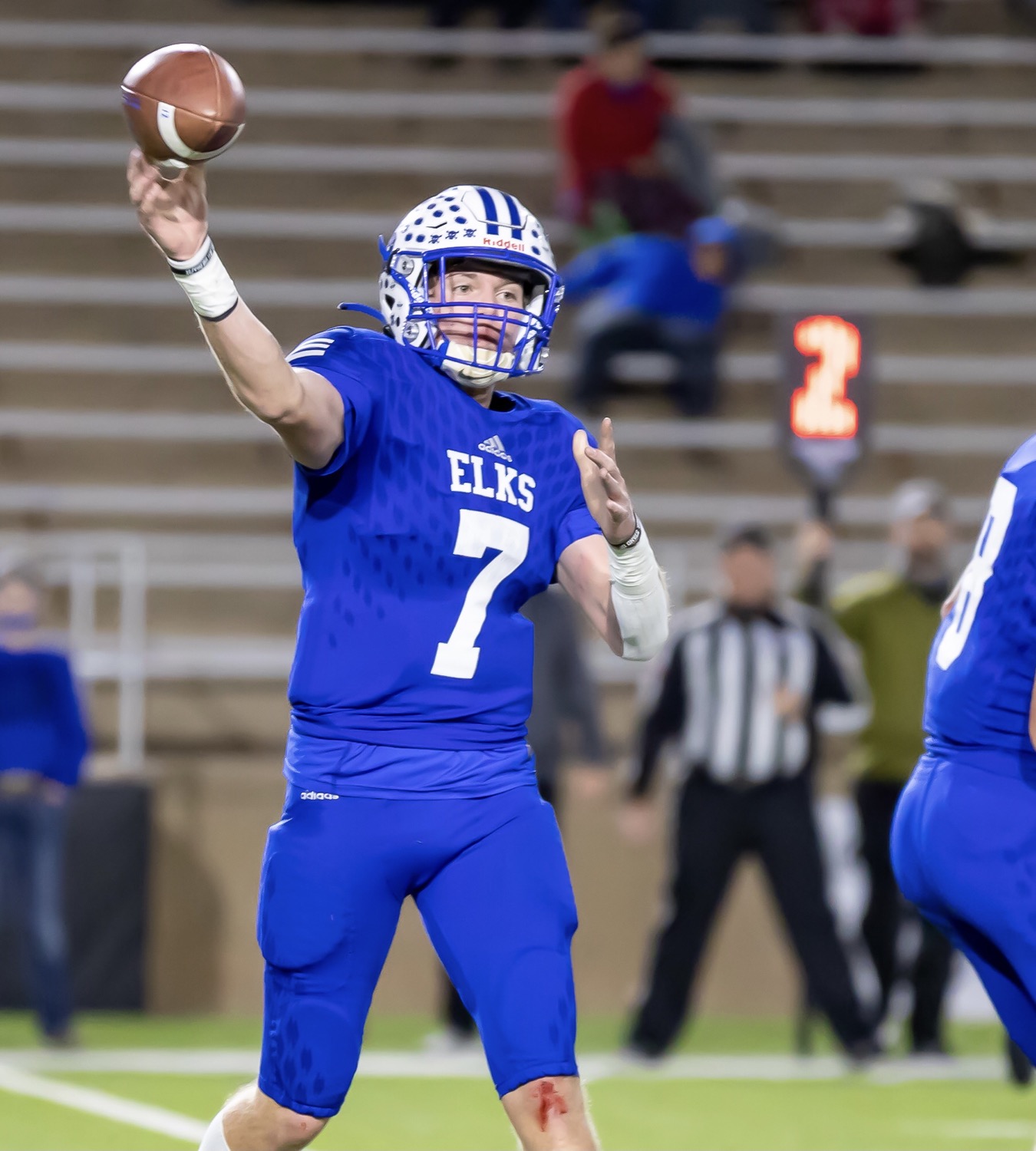 Stratford got ahead early and never looked back claiming the Class 2A Division II area title 53-18 over Smyer at Happy State Bank Stadium in Canyon on Friday night.

The Stratford defense showed up to play holding the Bobcats scoreless in the first half and only allowing 20 yards passing for the entirety of the game.

Stratford was led by QB Trevor Bell who finished his night with 14-of-18 passing for 153 yards, and added another 63 yards on the ground picking up a touchdown rushing and passing. Stratford’s stable of backs was led by Zane Burr finishing with 78 yards and a score.

Stratford (7-5) to the regional semifinal round where they will face McCamey (10-1) at 6 p.m. Friday at Todd Field in Shallowater.

The Wellington Skyrockets faces their biggest test today, earning a hard fought win against Wink 34-28 in a Class 2A Division II area round meeting Friday night at the Mustang Bowl in Sweetwater.

The No. 3-ranked Skyrockets were in a battle from the start, trailing the majority of the first half before tying the game, 14-14 at halftime. Junior do-it-all player Marc Ramirez was doing all he could to keep his team in the game scoring both touchdowns in the first half.

The second half started with a Wellington touchdown by Mason Folk that turned the momentum in the Skyrockets favor. A pick-six put the skyrockets up 26-14 and gave them the edge they needed to keep Wink out of reach. Both teams would exchange touchdowns as Wellington took a 34-21 lead into the final quarter and were able to hold on.

The lead back for Wellington, Ramirez, finished his night with 224 yards with two touchdowns on 30 carries. Folk was a great supporting back adding another 54 yards and a score.

Wheeler came up just short in the closing minutes falling to McCamey in a 34-31 heartbreaker during a Class 2A Division II area round matchup Friday night in Abernathy.

Down 34-23 early in the fourth and just under seven minutes left in the final quarter, running back Daniel Rascon found the end zone for Wheeler cutting the deficit down to 34-31. Once the Mustangs gave the ball back, they never were able to get it back, and the Badgers ran out the clock.

This was a tough ending in more ways than one for head coach Chris Evans. Not only does the loss hurt, as the Mustangs end the year at 9-3. But he also has to say goodbye to star running back and one of the Texas Panhandle’s best players in the area, Heston Marshall. The strong, speedy do-it-all Wheeler standout did all he could in the contest finishing the night with an impressive 258 yards and two scores on 31 carries in his final game in a Mustang uniform.

McCamey (10-1) advances on to the regional semifinals where they will take on Stratford (7-5) at 6 p.m. Friday night in Shallowater.

It was a slower start than what Panhandle is used to, but the Panthers pulled ahead in the end taking the win 49-35 over San Saba in a Class 2A Division I area game Friday night in Henrietta.

The first half saw a 14-14 tie with both teams feeling each other out, but the second half was a shootout. Panhandle quarterback Wes Jones was a monster in the second half scoring three touchdowns with one in the air and two on the ground, including a 72 yard rushing touchdown to put the game away.

Landyn Hack was a rock for the Panther offense as he had both scores in the first half and pick up another in the final quarter. The sophomore back finished his night with 67 yards and three scores on 17 carries. He was complimented by Jayse Edwards with 126 yards on 17 carries.