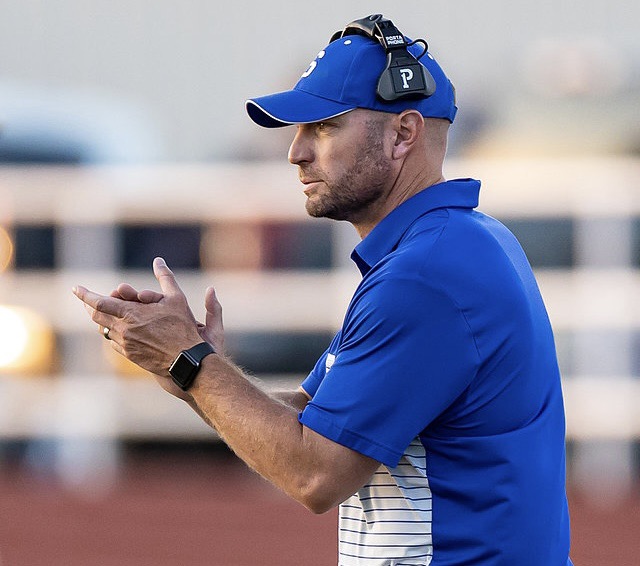 1. Panhandle: The Panthers have to reload after the loss of a talented senior class, and offensive lineman Colter Lynch transferring to Lubbock-Cooper. The good news for coach Dane Ashley, his son and QB Landyn Hack is an elite player ready to be a leader for a new look Panhandle team.

3. Olton: For the first time in four years the Mustangs will have to adapt to life without the elite Jack Allcorn. Coach Ross Lassiter’s son and senior Logan Lassiter is the next man up for Olton. Lassiter was superb filling in for Allcorn during an injury last year.

4. West Texas High: A lot of questions surround the Comanches after the loss of standout QB Avian Cruz and a talented group of seniors. Avian’s brother, Andreus takes the QB reigns for a young team that will battle for the playoffs.

6. Boys Ranch: It’s been a four-year struggle for Boys Ranch, but is this the year the Roughriders find the win column and snap 40-plus long losing skid. The confidence is there for Caprock coach Aaron Wampler and his players.

A clash of completely different styles highlights a possible district championship showdown in late October. This is the type of game that could come down to who wins in the trenches in the fourth quarter.

1. Smyer: Are the reigning district champions primed for a repeat? Eleven total starters come back with the notion of what it takes to get the job done.

2. New Home: Ten starters return off a team that made a playoff appearance for a second straight season making the jump from Six-man. Expect the same result in 2021.

3. Sudan: Coach John Cornelius’ team is solid shape thanks to a veteran group returning to create some buzz. The Hornets always seem to find themselves in the mix.

4. Bovina: The Mustangs will have a much different look, however, running back Darian DeLaRosa and his leadership skill will keep the Mustangs in playoff contention.

5. Ropesville: The Eagles are adjusted to the 11-man game. Will it benefit into a postseason berth is the question.

The Bobcats make a trip to the exploding community of New Home for a mid-October showdown. What a dandy this could be for the district crown.

1. Stratford: The Elks are physical up front, Cody Rinne at QB and athletes at all the right positions. Depth is an issue at this level, but coach Matt Lovorn has a Stratford team that is primed for a deep playoff run.

2. Vega: Coach Jason Porton has built Vega into a winning culture where it’s not just about the getting to the postseason, but earning wins into December when they do get into the playoffs. The Longhorns made huge strides winning the district title a year ago, and with QB Ryan Grawunder and RB Clay Gilter back, expectations are high.

3. Gruver: After being one of the younger teams last season, the Greyhounds are a year older with 17 returners coming back second-year coach Lee Brandon. The Greyhounds will be a scary team to watch by district play.

4. Sunray: What a job by coach Wes Boatman making major improvements to the Bobcats football program last season. Boatman and his 14 returners hope to build on what was started.

5. Booker: Depth will be the biggest factor for coach Jonathon Lambright. There’s definitely some talent on the roster thanks to two-way lineman Erik Ramirez. Staying healthy will be a big concern.

Vega made a name for itself last season beating the Elks in a wild 48-42 clash at historic E.L. Sam Bass Stadium in Stratford. It hasn’t been a friendly place to many opponents, so it had to give Vega much confidence. But, will Stratford be heading to Vega with revenge on the mind? Can the Longhorns keep the district title in Vega? What a showdown this will be.

1. Wellington: Head coach Greg Proffitt has kept the tradition rolling at Wellington. In his first two seasons the Skyrockets are 25-3, and came within a touchdown of playing for a state championship last season. Proffitt and leaders Marc Ramirez with Creighton Killian are determined to make a run all the way in 2021.

2. Clarendon: The Broncos won a 2A state basketball championship last year that coach Clint Conkin is hoping translates to the gridiron. The skill is unmatched with Jmaury Davis, Jordan Herndon and Lmarcus Penigar.

3. Wheeler: The Mustangs see a big change this year under new head coach Matt Hoover. Hoover takes over after a stint in Vernon, replacing Chris Evans. Hoover’s first order of business is to find players to pick up the slack for standout Hesston Marshall.

4. Shamrock: Enter Jeff Caffey as the new football coach at Shamrock. Caffey was born into the coaching world, and brings plenty of knowledge that can help a young Irish team.

5. Memphis: The Cyclones are made up of hard-nose players that take the form of alum and head coach David Jurado. Expect Memphis to battle for a playoff spot.

This game won’t lack for athletes on the field. The four quarters will come down to who has the tougher lineman still battling in the fourth quarter. If the Broncos ever want to dethrone Clarendon, winning the trenches is the key.