Class 1A roundup: Groom airs it out against Follett; Happy season comes to end 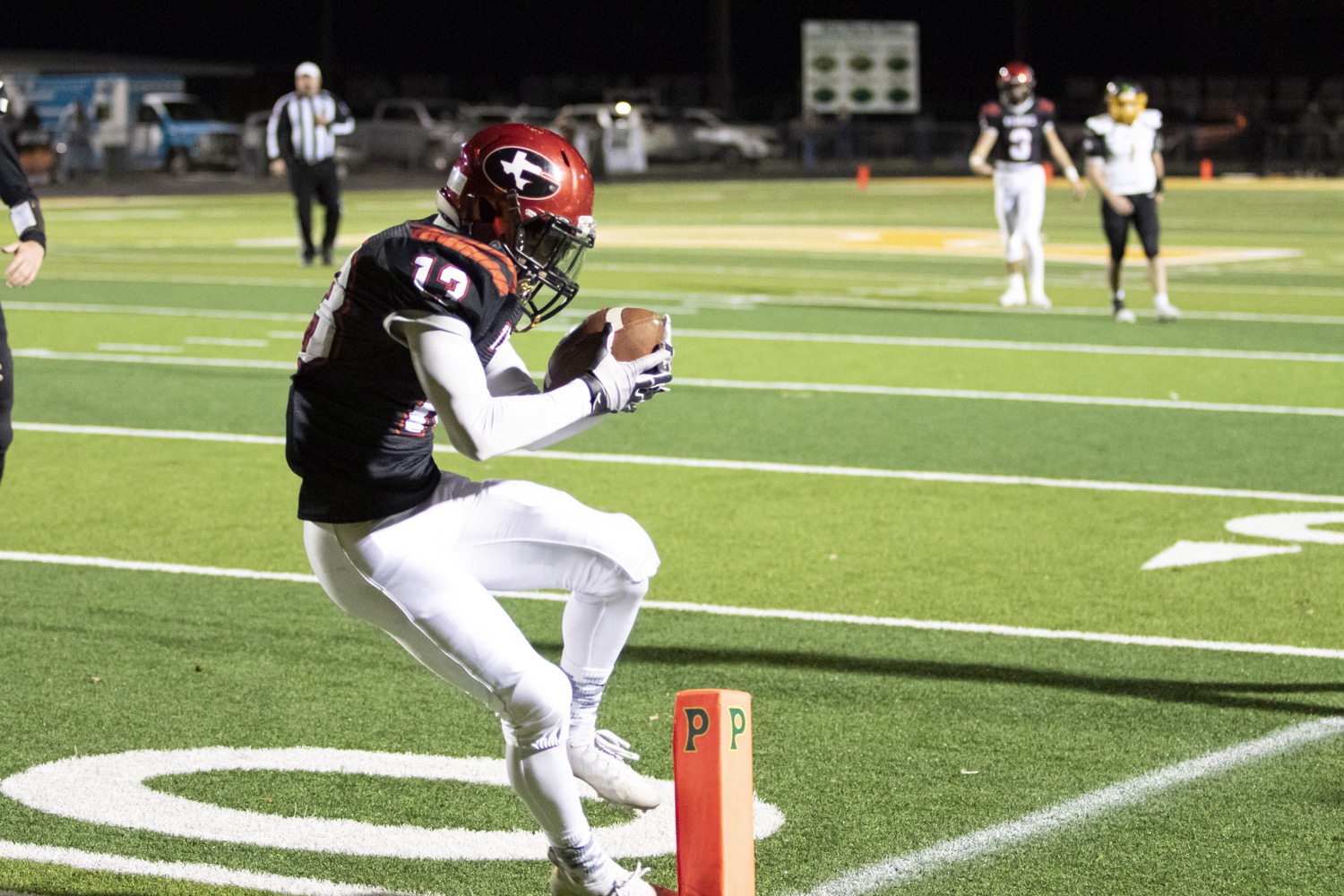 Groom‘s Stephen Kuehler (13) makes a catch and sneaks Inside the pylon for a touchdown against Follett during a Class 1A Division II state quarterfinal on Friday in Pampa. [Seth Ritter/ Press Pass Sports]

Groom and Texas Panhandle Six-man teams have been overlooked for a majority of the season, but the Tigers sent a message during a Class 1A Division II state quarterfinal on Friday night with their 72-26 win against Follett in Pampa.

Groom decided that they were going to do what they did best, and do it often. The Tiger offense ran 30 plays against Follett, with 23 of those coming by way of the pass. Groom relied heavily on senior spreadback, Gunnar Lamb, as the signal caller went an impressive 18-of-21 passing for 430 yards and nine passing touchdowns. Lamb has truly established himself as one of the best backs in Six-man Division 2 this season. On the receiving end of his passes were brothers Damon and Stephen Kuehler. The duo compiled 325 yards on 11 receptions for seven touchdowns.

As impressive as the Groom offense had been, the Tiger defense faced a real test against Follett’s backfield tandem of Shayne Franks and Jonathan Camacho. Franks unfortunately was sidelined after the second quarter but was still able to pick up 101 yards on 16 carries to go with a score. Camacho had to step up and did, picking up 108 yards and two scores on 13 carries.

For the fourth time since 2015, Borden County was too much for the Happy Cowboys to handle.

The Coyotes opened their Class 1A Division I state quarterfinal contest up in the second quarter against the Cowboys, and never looked back for a 65-20 victory in Levelland on Saturday.

Happy, which has now been eliminated by Boreen County in the last four meetings, ends a spectacular season at 11-2. Borden County moves to 11-2 overall and will face unbeaten Sterling City (13-0) in the state semifinals at a time and place to be determined.

The Happy defense couldn’t find a way to slowdown the Coyotes running attack. Ky Edwards did the most damage, piling up 267 yards with three touchdowns on 17 carries.

Teammate Mason Cole added 54 yards rushing with three touchdowns of his own.

Happy Stetson Jameson played as well as he could in his final game in a Cowboy uniform. The senior that has helped carry the Cowboys all year chewed up 174 yards on 22 carries and a score, while throwing for 96 yards with a TD.

Jameson ends a spectacular season where he rushed for 2,548 yards in 14 games with 55 rushing touchdowns.