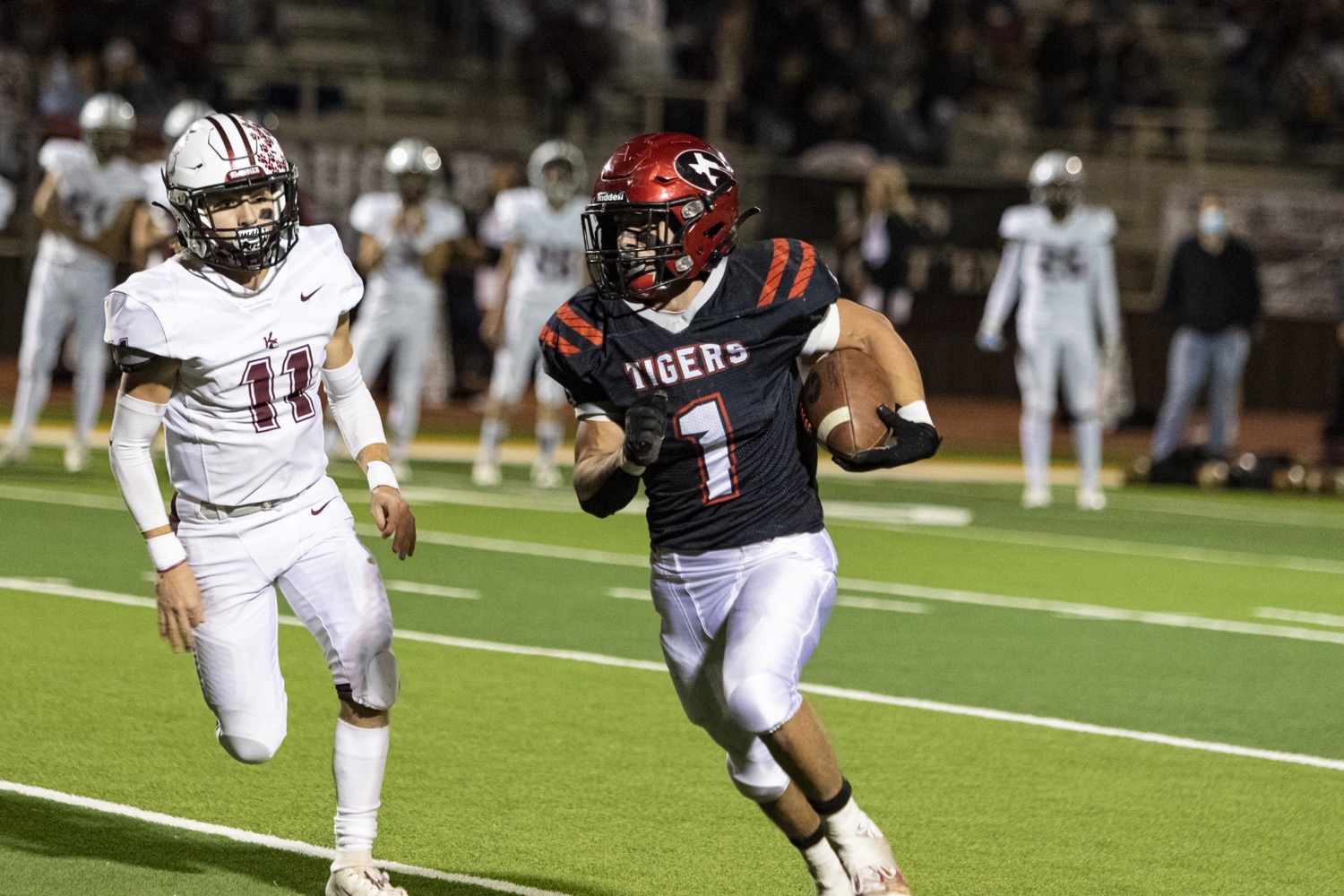 Groom running back Braedon Williams (1) gets the corner against Klondike during a Class 1A Division I regional semifinal Friday night in Sudan. [Seth Ritter/ For Press Pass Sports]

Groom has now won 11 straight games after a a season-opening loss, as well as making its

The Tigers earned that right by downing previously unbeatenKlondike 62-50 in a regional semifinal on Friday night in Sudan.

Groom led throughout, taking a 42-28 lead into halftime. Quarterback Gunnar Lamb and the offense were able to tack on two more scores in the third but were held silent the rest of the way. Leading 62-34 heading into the fourth, the Tigers were comfortable and Klondike was set to take advantage. Klondike added 16 unanswered points, but it wasn’t enough as the Groom defense did enough to get the win.

Lamb finished his night going 17-of-22 through the air for 219 yards and three touchdowns, while also rushing for 157 yards on 16 carries and two rushing scores.

Groom (12-1) heads to the state quarterfinal for a showdown with Follett (12-0) at a time and place to be determined.

The Follett Panthers had to hold on to the final minute but were able to stay unbeaten and survive in the postseason, holding off Anton, 44-43, in an exciting Class 1A Division I regional semifinal on Friday night in Chillicothe.

Follett seemed in complete control up 44-29 with 9:13 left in the contest after a Jonathan Camacho 1-yard plunge on a fourth-and-goal.

But the Bulldogs came storming back. Spread back Quinton Sherrod broke loose for a 30 yard score, making it 44-35 Panthers with over six minutes left. After Follett turned it over on downs, Anton struck again with two minutes left on a Sergio Champion TD pass to Ashton Martinez. The extra-point was good, and all of a sudden Anton is within a point, 44-43 with 2:11 left.

Follett was unable to run out the clock, giving the ball back to Anton with under a minute left. However, like they have all year, the Panthers relied on their defense to get it done. With 50 seconds left, Anton faced a fourth-and-five at the Follett 10-yard line. Champion took the snap, got pressure from defensive end Marshall Howard. Champion tried a throw to the sideline to receiver Joseph Cervantes, but his foot was out of bounds on the catch, and the Panthers held on.

Follett is undefeated at 12-0 and will face a big showdown with Groom (11-1) at a time and place to be determined.

The No. 6-ranked Happy Cowboys are back in the Class 1A Division I regional finals for the first time since 2017 picking up a hard fought victory over No. 7 Knox City 60-42 in a regional semifinal matchup at Johnson Field in O’Donnell Friday night.

The Cowboys running game chewed up over 300 yards on the ground but it was some timely passes that propelled the Cowboys to victory.

Happy jumped out to 22-6 with 9:30 left in the first half courtesy of a Stetson Jameson 14 yard TD scamper. Knox City fought back cutting the deficit down to 22-20 with 3:03 left in the half on a Tres Fausto 3-yard run.

The passing attack of Happy struck quickly in the third quarter when Jameson found Aric Coile on a 10-yard TD pass. Happy then separated itself getting the ball back on the ensuing possession. The senior Jameson raced in from 13 yards out to go up by a commanding 38-20 score.

Jameson finished the night carrying the pigskin 23 times for 280 yards and six touchdowns, while passing for 59 yards and two scores. Happy (11-1) advances to the state quarterfinal to play old rival and No. 2-ranked Borden County (10-2) at a time and place to be determined. The Cowboys will be looking to avenge three straight playoff losses to the Coyotes from 2015 to 2017.