Class 1A roundup: Follett, Happy and Groom all cruise to next round 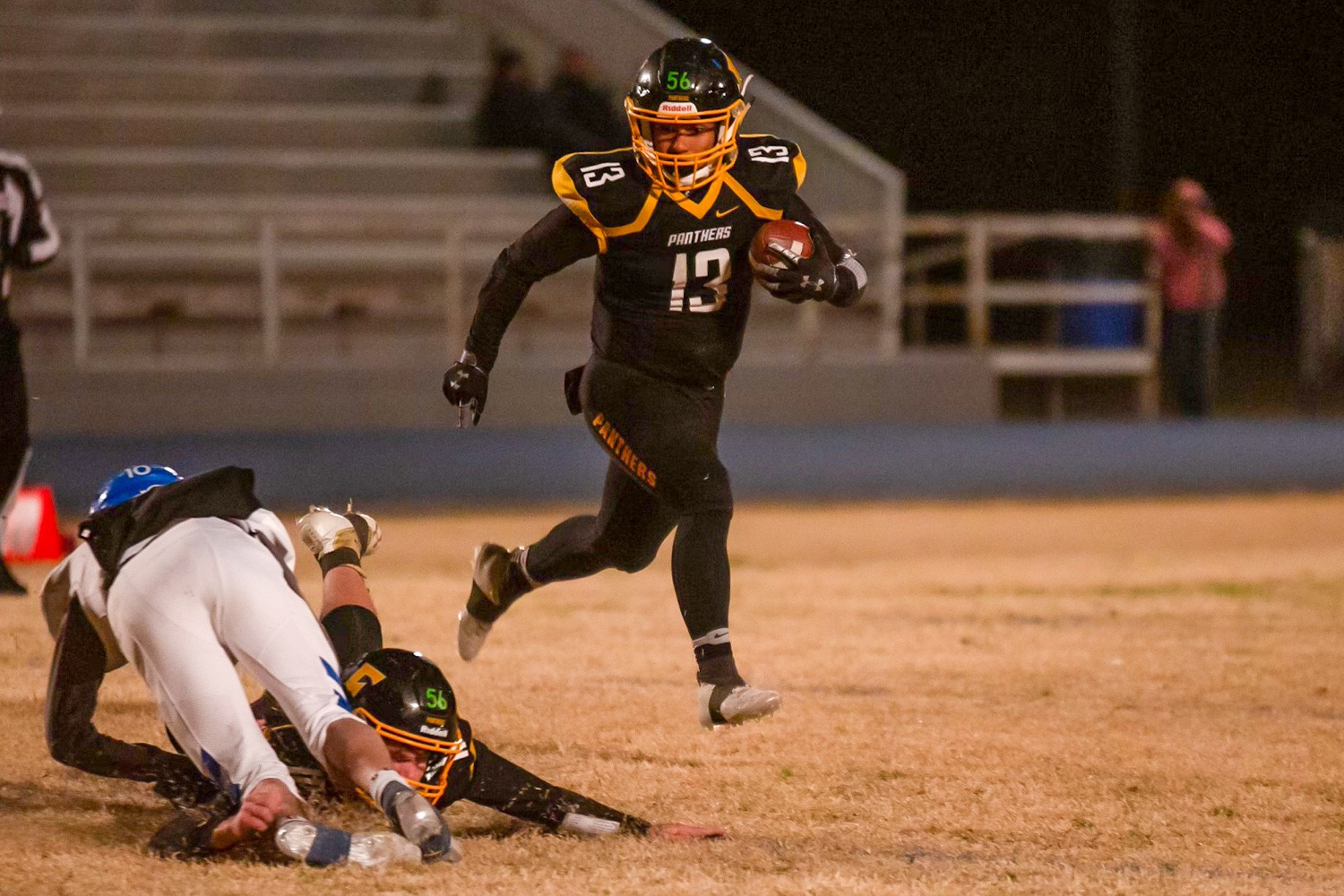 Follett running back Jonathan Camacho takes a sweep for big yards against Wildorado in a Class 1A Division II bidistrict clash in White Deer on Friday. [Sierra Franks/ For Press Pass Sports]

Follett stayed perfect on the season and won its first playoff game in almost two years by mercy-ruling Wildorado 48-0 during a Class 1A Division II bidistrict contest in White Deer on Friday.

Follett remains unbeaten at 11-0, and moves on to face Anton, which is 10-0, in a regional semifinal showdown at 7 p.m. Friday in Chillicothe.

Wildorado ends a very successful first season in the University Interscholastic League at 8-3.

Follett running back Jonathan Camacho led the way with four carries for 60 yards and a pair of touchdowns. Teammate Shayne Franks added six carries for 40 yards and two scores of his own.

Follett held the Mustangs to 10 total yards, and has only given up a total of 57 points this season.

Groom gets past Miami’s best

It took all four quarters, but the Groom Tigers were able to secure a Class 1A Division II bidistrict victory 67-37 against Miami on Friday in McLean.

Miami head coach Clint Linman and the Warriors were not about to lay down and let the Tigers get an easy mercy-rule win at half time. Miami did its best to keep things close, trailing 28-21 at the half. Groom’s offense proved to be too much in the second half.

The Tigers offense got off to a slow start, but Gunnar Lamb and company fired things up. Lamb finished his night going an impressive 10-of-12 through the air for 255 yards and four touchdown passes. Braeden Williams did his part on the ground finishing the night with 88 yards and two touchdowns on 9 carries. Tyler Boyd was the leading receiver for the Tigers picking up 130 yards and three scores on only five receptions.

Happy used a 23-0 run to start the game and four Petersburg turnovers to run away from the Buffaloes 71-22 in a Class 1A Division I bidistrict matchup in Kress on Friday.

Happy jumped out to that 23-0 lead on the strength of two Stetson Jameson rushing touchdowns and a Jameson to Arik Coile 23-yard touchdown pass.  However, Petersburg delivered their best shot in the second quarter cutting the lead to 29-16 before Happy scored three straight touchdowns to go to half up 49-16.  Happy then finished off the Buffaloes with 4:30 remaining in the third when Jameson stripped the ball from Jesus Alvarado and raced 40 yards for the final touchdown.

The move from 11-man to Six-man has proven beneficial for the Springlake-Earth Wolverines as they went from 0-10 a season ago to Class 1A Division I bidistrict champs with a 56-36 win over White Deer on Thursday at the Cowboy Corral in Happy.

The Wolverines utilized a balance attack to race out to a 30-0 lead with 4:20 left in the first half.  White Deer climbed back into the game with 3:35 left in the third on a Hunter Warminski 1-yard plunge to cut the Earth lead to 42-28.  After both teams exchanged scores Keshan Holmes scored from 1-yard out with 3:37 left in the game to put Earth up 56-36 to seal the victory for the Wolverines.

Holmes scored four times on the ground and Braxton Ethridge had two passing touchdowns, adding a rushing TD. Hunter Warminski capped off his year rushing 11 times for 158 yards and three scores and passed for another.  Earth moved to 7-3 on the season and plays Borden County (9-2) at 7 p.m. Friday in Slaton in the regional semi’s.