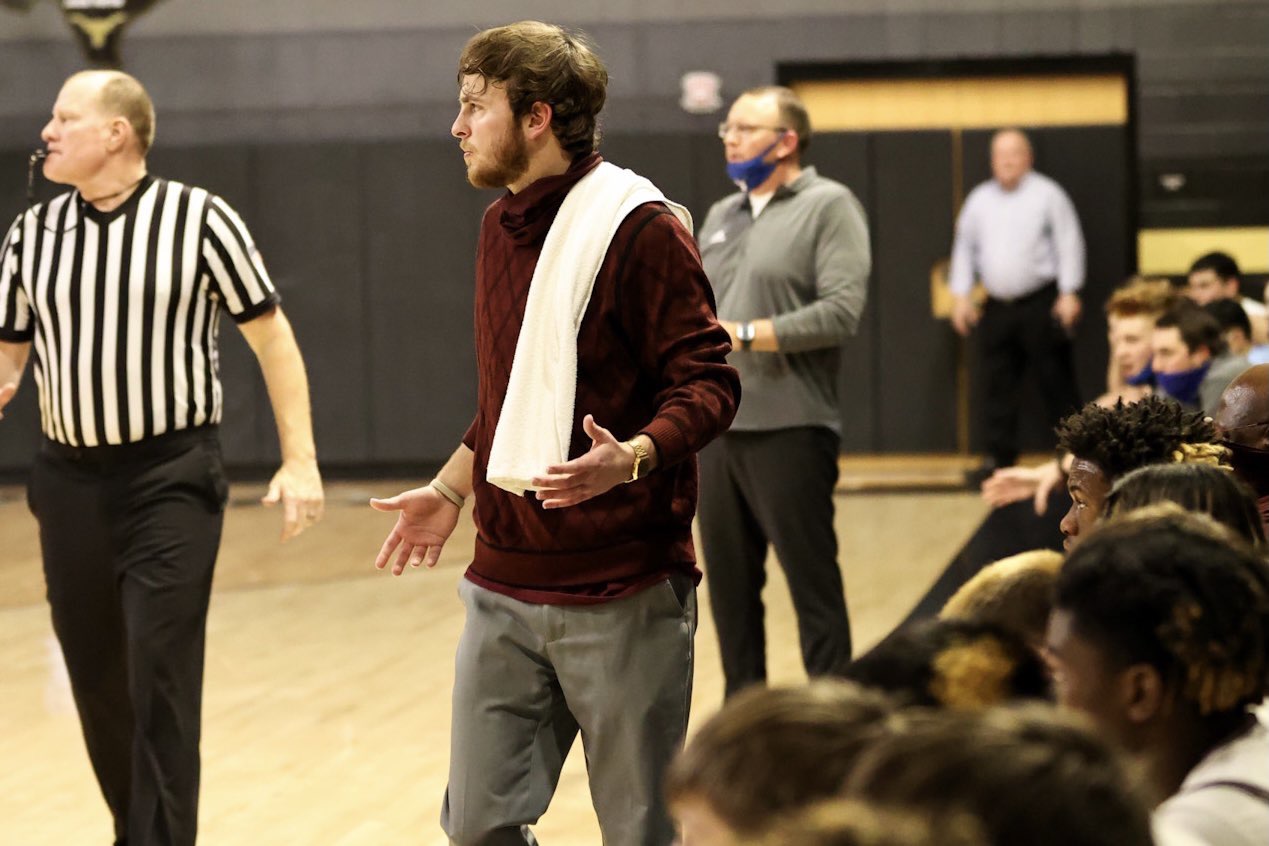 Clarendon will play in the UIL Class 2A state championship game against Grapeland at 10 a.m. Saturday at San Antonio’s Alamodome. [Johnette Stribling/ For Press Pass Sports]

Canadian graduate and first-year Clarendon head boys basketball coach, Boston Hudson, is one game away from winning a state championship.

Hudson and the No. 2-ranked Broncos (25-4) raced past Lipan, 67-48, in a Class 2A state semifinal Tuesday, and will now face No. 3 Grapeland at 10 a.m. Saturday for the state title in San Antonio’s Alamodome.

“I’m so proud of our guys,” Hudson said. “This means a lot to me. No one knows how hard these guys work everyday. It was also emotional to me because my parents were here to see this.”

Hudson, 25, has risen fast through the coaching ranks since graduating from Canadian High School in 2014, and at West Texas A&M in 2018. Hudson spent a season as a graduate assistant at Oklahoma City University for then head coach, Vinay Patel. Last season, he landed his first head basketball coaching job at Wheeler, before accepting the Clarendon gig last spring.

Coaching has been in Hudson’s blood from an early age. He sat on the bench as a youth, and played basketball under his father, Johnny, who coached for 28 years, including six seasons at Canadian from 2008-2014. His mother, Nita, was as an assistant for Johnny before going into administration.

“My parents mean everything to me,” Hudson said. “It meant the world for them to be at the state semifinal game. I’m so appreciative of them, and having them making the trips to watch us play each game.”

Johnny and Nita now reside in Alamogordo, N.M., but that hasn’t stopped them from burning up the Texas highways logging countless miles to watch their youngest son fulfill his dream. Johnny and Nita made most of Hudson’s regular season games, and have yet to miss a playoff contest.

“It’s been so special to watch,” Johnny said. “When your child decides to go into coaching you hope they have a great experience. Here we are in his second year of coaching and he’s getting a unique experience.”

Johnny, who is retired from coaching, says he’s now getting an entire new feeling watching his son pace the sidelines.

“I was never that nervous when I played or coached,” Johnny said. “I wasn’t nervous when Boston was my point guard. But I’m more nervous now than I’ve ever been watching him coach, and putting his players in certain positions. It’s crazy how that works.”

To this day, Hudson never hesitates to pick up the phone and call his father, who is his best friend and mentor. Johnny helps his son watch film and the two talk for hours game-planning each and every week.

“My dad is everything to me,” Hudson said. “I’ve taken a lot from him, and instilled his philosophies into my program. He’s been valuable. He never got out worked when he coached, and he always is there to help and make me better.”

Check out how Texas Panhandle Class 4A teams faired from Week 6 of the regular season.
Football

Check out how Texas Panhandle Class 3A-2A teams faired from Week 6 of the regular season.
Football

Tascosa runs over Abilene to move to 2-0 in district

Tascosa stays unbeaten in District 2-5A Division after 36-14 win over Abilene High.
Football

Amarillo High downs Caprock in District 2-5A Division I clash.