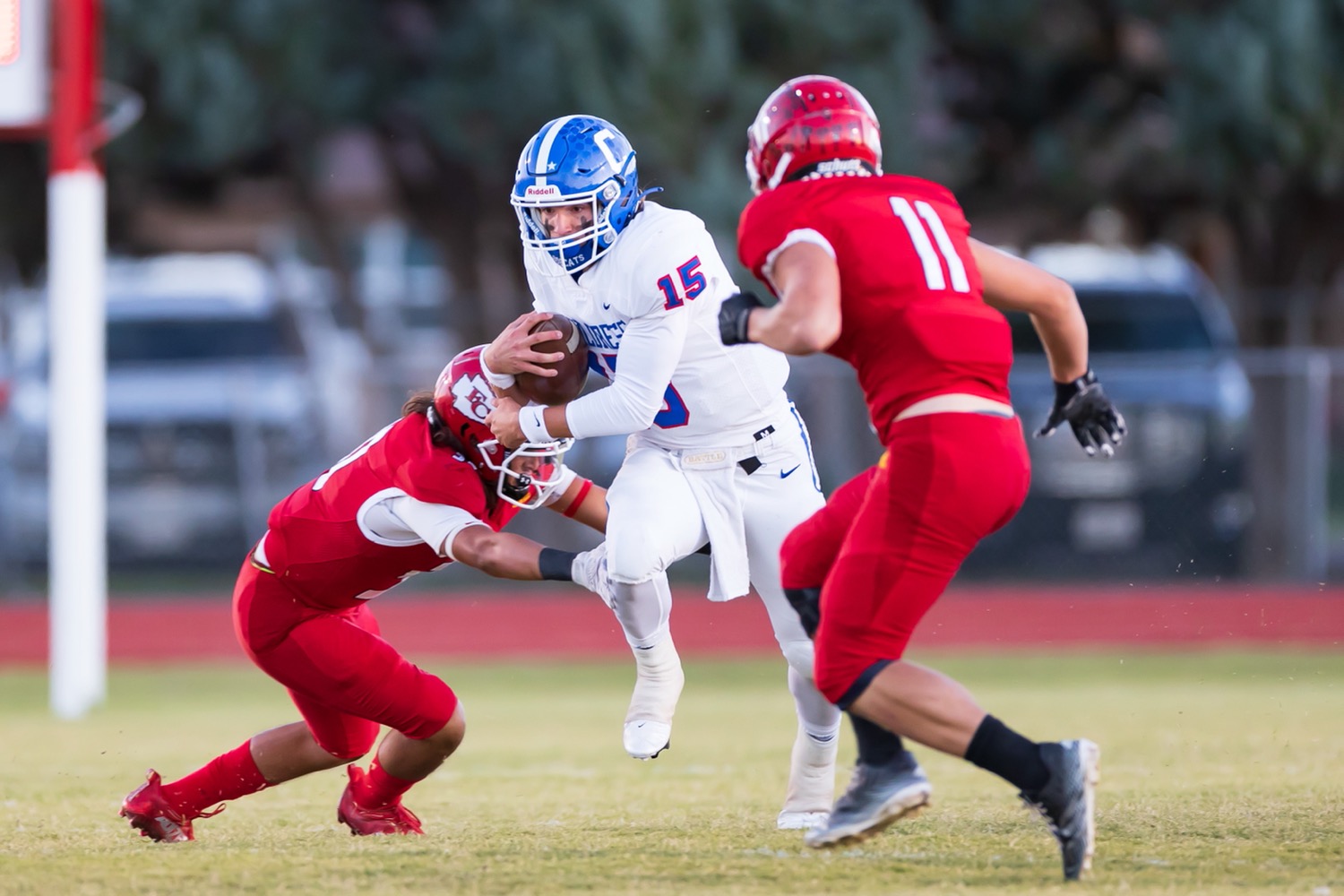 Collin Bishop delivered a late touchdown pass, and made a game-saving interception that lifted Childress to a thrilling, 40-35, victory over upset-minded Friona in front of a packed house at Chieftains Stadium on Friday night.

The No. 3-ranked Bobcats and No. 12 Chieftains battled back-and-forth in a battle of unbeaten teams that lived up to the billing of this marquee District 3-3A Division II clash, and then some.

Childress actually led 21-7 in the second quarter only to see Friona claw back into the game scoring right before the half cutting the advantage, 21-14.

Friona came out firing scoring on its first three possessions of the second half to take a 35-34 lead with 9:18 to play in the fourth quarter. That’s when Bishop and the offense marched down on a 16-play, 47-yard drive resulting in a Bishop strike to Lamont Nickelberry from 5-yards out putting Childress back on top 40-35 with 2:59 remaining.

The Bobcats defense then answered the call in the closing minutes. Seth Taylor intercepted a Jose Luis Saucedo pass with 2:01 to play at the Friona 26-yard line. After a quick Bobcat three-and-out, the Chieftains had one more chance with just under a minute remaining, however, a Bryan Chavira pass was picked off by Bishop nearing midfield sealing the game for the Bobcats.

On top of his huge defensive play, Bishop delivered offensively once again completing 26-of-42 passes for 266 yards with three touchdowns. On the ground, the dual-threat QB grounded out 125 yards on 23 carries with a pair of touchdowns, including a 48-yard scamper in the third quarter.

Taylor caught a touchdown from Bishop and added two interceptions on defense.

Bryan Chavira led Friona with 97 yards and a score.

What Koetting has done in 12 seasons at Canadian is extremely impressive. Koetting is an astounding 150-18 during those 12 years, he’s totaled an immaculate 43-8 postseason record, and has collected three state championships since the 2014 season.

“I mean this in all honesty those 150 wins are because of the great work from our coaching staff,” Koetting said. “It’s everyone involved in the program from the players that put in the work, our coaching staff and the community support.”

With the 150 victories, Koetting is the active wins leader among head coaches in the Texas Panhandle.

Canadian also pushed its Texas Panhandle-best district win streak to 46 straight, as the Wildcats improve to 6-1 overall and a perfect 3-0 in District 3-3A Division II.

This game was never close. The Wildcats jumped all over Dimmitt opening up a 34-0 first quarter advantage, then pushing that lead to 55-6 by halftime.

The Lynx earn their first win in district moving to 1-2 in District 3-3A Division II, and 4-3 overall.

The Hornets are still seeking their first win dropping to 0-8, 0-4.

Spearman only ran 34 plays, scoring 47 points in that time. Receiver Brayden Klafka had a rushing touchdown, a receiving TD, and an interception on defense.

The Lynx also blocked two punts they returned for scores.

District 2-3A Division I

In a tale of two halves, the Dalhart Golden Wolves erased a 25-point halftime deficit putting up 36 unanswered second half points to leave Littlefield with an epic come-from-behind 41-32 victory on Friday night at Wildcats Stadium.

It was all Littlefield in the first half as the Wildcats built a commanding 32-7 lead heading into halftime. Even starting the fourth quarter, the game was still Littlefield’s to win leading 32-14.

However, Dalhart’s defense made plays, and quarterback Thomas Meyer took over. Meyer scored four touchdowns in a row with his feet and through the air. The seniors signature touchdown came in the closing seconds when Meyer connected to Luis Favela on a 40-yard pitch and catch giving Dalhart its first lead, 35-32, with 12 seconds to play.

After the ensuing kickoff, the Golden Wolves forced a fumble resulting in a scoop and score from Dallon Gillmore for the 41-32 win as time expired.

Meyer was absolutely stellar throwing for 261 yards on 16-of-33 passes with two scores. He also toted the rock 20 times for 122 yards with another TD, totaling 383 yards on his own.

River Road made it a valiant effort against rival Bushland, but in the end Kash Bradley and the Falcons did just enough to get by the Wildcats for a 20-14 win at Falcons Stadium on Friday night.

This game was tied at half, 7-7. Bushland took the lead for good in third quarter on a QB Brian Marrell 8-yard toss to Breckan Reed for a 13-7 lead.

In the fourth quarter, the Falcons hit the dagger on the Wildcats adding much needed insurance when Marrell, from his own 4-yard line, found Kash Bradley streaking down the sideline. Bradley caught the pass in stride turned on his jets and went for a 96-yard touchdown reception. The 96-yard pitch and catch from Marrell to Bradley set a new school-record for the longest pass play in Falcons history.

River Road did tack on an Elliot brown touchdown cutting the advantage, 20-14, however couldn’t inch any closer.

Bradley snagged four passes for 176 yards including his 96-yard score. Marrell rushed for a touchdown, and was 7-of-16 for 261 yards with two TDs.

Defensively, linebacker Kyler Duke had a massive game racking up 18 tackles, five of those solo, with a quarterback hurry.

The Wildcats did chew up 358 yards rushing despite the loss. Brown carried the ball 30 times for 195 yards, followed by Dylan Frye’s 115 yards on 20 carries. 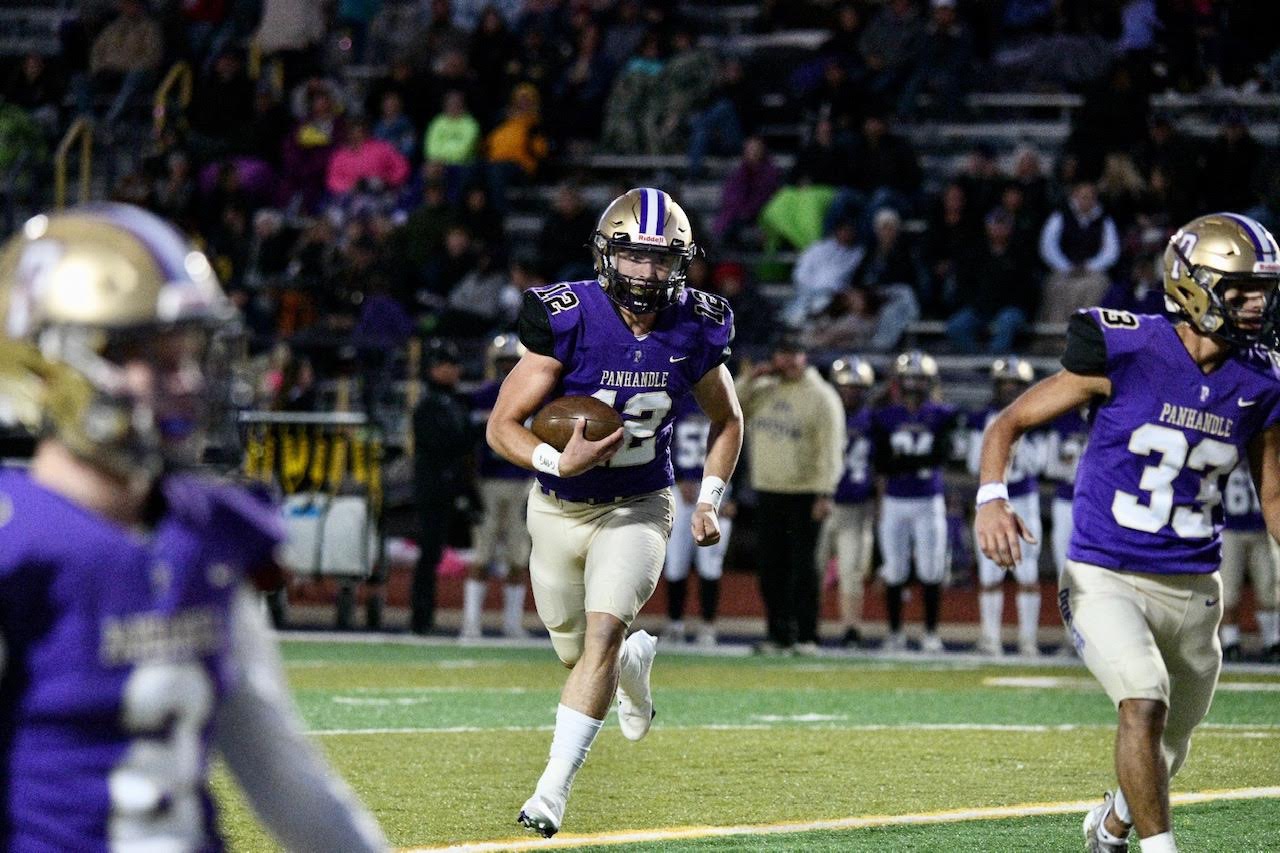 District 1-2A Division I

Make it two in a row for the Panhandle Panthers, after a 67-12 home victory over West Texas High on Friday night.

Panhandle is starting to streak after starting the season 0-5 start putting together back-to-back victories. The Panthers are now 2-5 overall but more importantly 2-0 in District 1-2A Division I.

To no one’s surprise, it was junior Landyn Hack who was the biggest impact to Panhandle’s offensive explosion. Hack was 2-of-5 through the air but completed his two passes for 35 yards and a score.

On the ground, Hack was a bit more productive, finishing with 120 yards and three scores on only 10 carries for the Panthers. When it wasn’t Hack finding the endzone, it was more than likely Malachi Preston finding his way to the big house. Preston took six carries for 50 yards and punched it in twice to keep the Panthers ahead.

The Comanches are still seeking their first win falling to 0-7, 0-2.

The Farwell Steers put stayed hot with another 50-plus point performance downing Sanford-Fritch at home by a 55-7 count on Friday.

The story writes itself at this point as Corey Stancell once again pounds the rock and fuels this Farwell offense to another impressive outing. The sophomore running back finished his night scoring five touchdowns that all came in the first half. Stancell ended the game with 14 carries for 234 yards those carries with five those touchdowns that included a 71-yard scamper to start the scoring in the first quarter. Carlos Castillo was a complement to Stancell’s dominant game as Castillo put up 93 yards and a score on his 11 carries.

Gruver stayed perfect on the year with a lopsided 51-12 home win against Booker on Friday.

Gruver’s Colton Millsap went on a rampage collecting four touchdowns in the first half alone. In a short night of work, Millsap snagged three catches for 72 yards and three scores as well as tacking on three rushes for 58 yards and another endzone visit.

Mason Gibson didn’t miss many passes as the Greyhound quarterback went 11-of-13 through the air picking up 258 yards and five touchdowns along the way.

Stratford had no issues handling old rival Sunray going on the road for a 64-7 blowout victory on Friday.

Stratford running back Zane Burr’s first two scores of the night put the Elks ahead 13-0 before the Bobcats could even blink.

Quarterback Code Rinne was exceptional finding pay dirt three times in a row. Rinne started his day with a 6-yard run to extend the lead to 21-0. He then intercepted Sunray’s Amado Lujan and returned it for a pick six. Following that score, with his team already up 27-0, Rinne found a streaking Dru Jones from 22-yards out to push the lead, 35-0.

Burr led the Elks on the ground going for 10 carries and 145 yards with four touchdowns. Rinne threw for 91 yards and two scores pass, adding 78 yards rushing with another TD.

For the first time since 2013 the Shamrock Irish took down arch-rival Wheeler in the Battle of Wheeler County thanks to a convincing 38-3 district win at El Paso Stadium in Shamrock on Friday night.

The running game was on another level as Shamrock ended its victory with three different 100 yard rushers.

Led by senior Sean Wright, the ground game amassed 380 yards and four scores. Wright ended his spectacular performance with 139 yards and three scores on only 15 carries. Caden Peavy added 118 yards of his own 18 carries. Dual-threat QB Kit Macina was also impressive with 112 yards and a score on 16 carries for the Irish.

It was another dominant victory for the Wellington Skyrockets on Friday night, as Wellington went on the road and took out Memphis 56-0.

Wellington is hot improving to 5-2 overall, and 2-0 in district. The Cyclones struggles continue dropping to 1-7, 0-2.

Wellington is known for its explosive running game, but it was the defense that stood out in this win.

The Skyrocket defense held Memphis to 63 total yards on 1-of-7 third down conversions, forcing a turnover along the way.

As per usual, All-State back, Marc Ramirez, led his team in rushing but this game was different as the senior running back only received four carries, but made the most of them stacking up 147 yards and three touchdowns. That’s an average of almost 37 yards a carry. Through the air, Creighton Killian was only 3-of-4, however two of those were for TDs.

Bovina is making noise with back-to-back wins after getting a come-from-behind 22-15 victory at home against Ropes on Friday.

The Eagles led for a majority of this game, but it was the Mustangs standing tall in the end.

The Bovina defense once again came through, holding Ropes to only 15 points on the night while allowing only 205 total yards and forcing two turnovers including a go-ahead pick six with by Miguel Lopes with 10:15 remaining in the fourth quarter.

On the offensive end, Bovina was lifted by a stellar 105 yard and touchdown performance by lead back Darian De La Rosa..

Bovina (3-5) now finds itself in first place at 2-0 in district. Ropes (5-2) is suddenly in trouble losing two straight games falling to 0-2 in district.