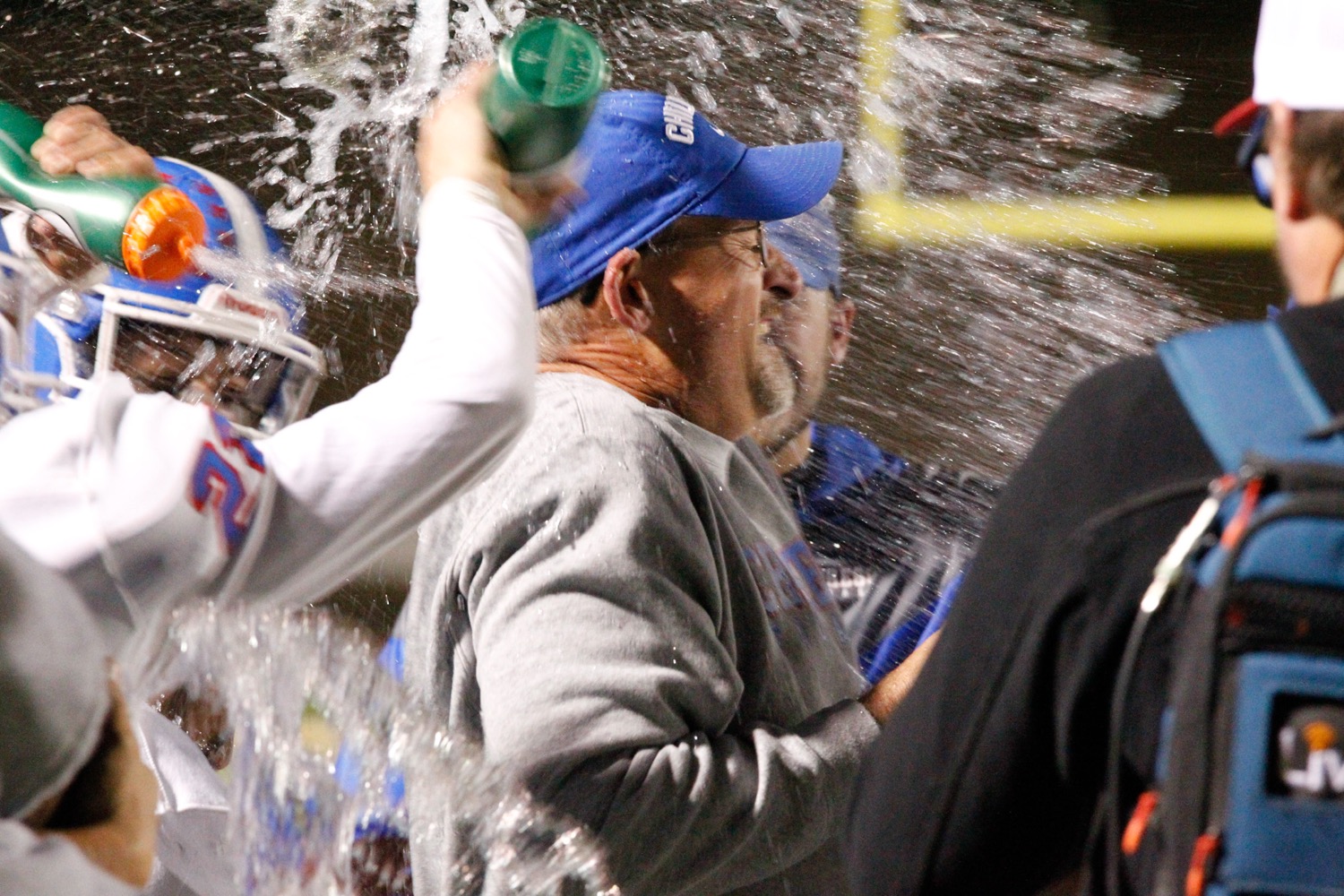 Childress polished off its first undefeated regular season in 31 years taking down a team that’s been a thorn in the paw of the Bobcats.

Childress went on the road Friday night and dominated arch-rival Canadian, 34-13, to not only beat the Wildcats for the first time since 1999, but also clinch the outright District 3-3A Division II championship.

“It was special,” said Sims, who is 61-22 at Childress in seven seasons. “It makes you think of back to all the wins even the first one. It also makes me think of all players and coaches that have been part of this. It’s not me it’s all. I have had so many great players and coaches that make me look good. Going undefeated was awesome. That was one of our goals, and we accomplished that part. We’d been a bridesmaid for so long, so this felt good, but now it’s on to the playoffs.”

The No. 3-ranked Bobcats (9-0 overall) will be the No. 1-seed out of the district, and are now set to face Stanton in a Class 3A Division II bi-district game at 7:30 p.m. Thursday in Floydada.

Canadian (7-3) dropped its second straight district contest for the first time since 1996. The Wildcats now try to regroup as the No. 2-seed out of the district when they play Idalou (8-2) at

Childress pulled away in the first half taking a 20-6 lead into the break on the way to beating the Wildcats. Quarterback Collin Bishop was the difference rushing for 195 yards on 23 carries with three touchdowns. The senior also added 124 yards passing with two more scores.

In a win or go home situation, Spearman stepped up to grab the fourth and final playoff spot out District 3-3A Division II knocking Tulia out of postseason contention with a 45-28 win at Lynx Stadium.

The Lynx finish the regular season at 6-4 overall, and will play Lubbock Roosevelt (10-0) in the bi-district round at 7 p.m. Friday at River Road.

Spearman pulled away in the second half outscoring the Hornets (6-4) 28-14 in the final two quarters.

Surprisingly, University of Texas commit Brenen Thompson made a showing just six weeks after having surgery taking 15 snaps for the Lynx, adding a touchdown in his limited work.

Quarterback Carson Seaman was efficient going 10-of-18 for 274 yards with two touchdown passed, and ran for another score. Jack Pipkin caught four of those passes for 116 yards with a TD.

In another District 3-3A Division II clash, Friona hammered Highland Park 56-18 on Friday. The Chieftains end the regular season at 8-2 overall and will be the No. 3-seed out of the district. The Chieftains face Abernathy (9-1) at 7 p.m. Friday in the bi-district round at Muleshoe.

District 2-3A Division I

The Wildcats had led 21-6 at half only to see the Golden Wolves tie the game, 27-27, in the fourth quarter.

That’s when Brown once again took over breaking loose for the eventual game-winning score on a 76-yard touchdown scamper giving River Road a 33-27 lead with 3:42 to play.

The Wildcat defense then stepped up stopping Dalhart on its final drive.

River Road (6-4) clinches the third spot out of District 2-3A Division I, and now plays Denver City in the Class 3A Division I bi-district round at 7 p.m. Thursday in Plainview.

Muleshoe had already secured the second spot in district, however, came from behind to beat Littlefield 38-36 in triple overtime Friday. 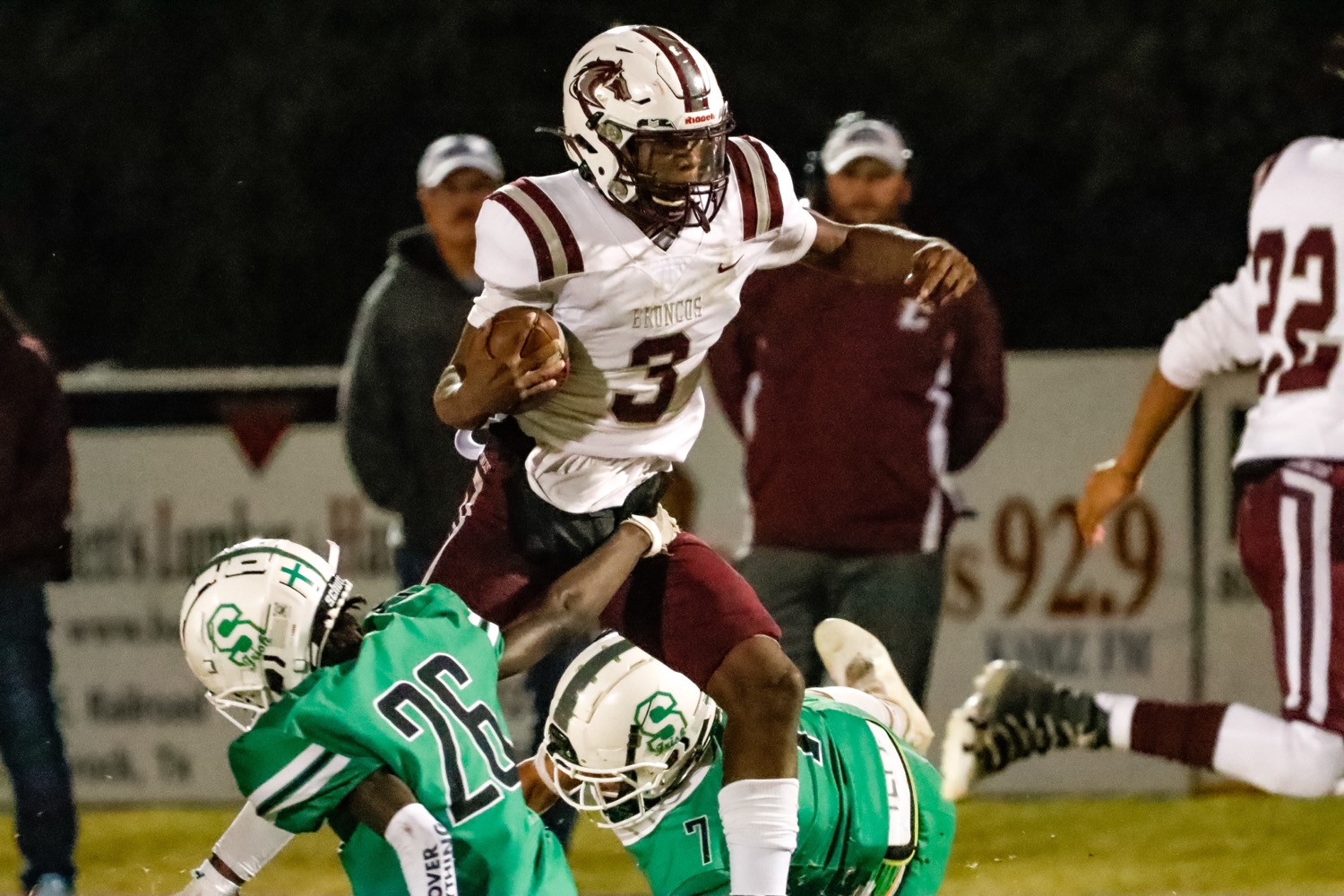 Clarendon almost led a 15-point second half lead slip away, but held on for a wild 42-41 win at Shamrock to secure the outright District 4-2A Division II title on Friday.

The Broncos (9-1 overall) are headed to the postseason as the No. 1-seed and will face Sunray (4-6) in a Class 2A Division II bi-district game at Thursday in Bushland. Shamrock (7-3) will get a rematch with Gruver (8-1) at 7 p.m. Friday at West Texas High in Stinnett.

Clarendon led 34-19 in the third quarter only to see the Irish rally to take the lead 35-34 midway into the fourth quarter. The Broncos answered with four minutes left on a Jordan Herndon 51-yard run.

Shamrock didn’t back down answering on a Sean Wright 5-yard run with two minutes to go cutting the lead, 42-41. However, on the 2-point conversion try Wright was stopped by the Clarendon defense inches short of the goalline.

Clarendon Junior Jmaury Davis had a huge game rushing making seven catches for 117 yards with two TDs, and tacked on 74 rushing yards for another score. Teammate Jordan Herndon racked up 166 yards rushing on 16 carries with a touchdown, and quarterback Brock Hatley threw for 155 yards with three scores.

Wright added 88 yards on the ground, and had a 75-yard kickoff return for a touchdown.

Wellington secured second place downing Wheeler 56-20. The Skyrockets (6-3) take on Vega (8-2) in the bi-district round at 4:30 p.m. Friday at Happy State Bank Stadium in Canyon.

The Stratford Elks secured another undefeated district championship Friday night with a 67-6 dismantling of the Booker Kiowas at home.

It was business as usual for the Elks as the run game dominated the Booker defense. The usual suspects Dru Jones, Code Rinne, and Zane Burr could not be kept out of the endzone. Jones finished the night with four rushes but was able to pick up 74 yards, and a score in the process. Rinne completed 5-of-8 passes for 77 yards and a score. Zane Burr was the star of the night, leading his team in rushing with 99 yards on five carries and two touchdowns. He also added a fumble recovery score on the defensive end for the Elks.

Vega dismantled Sunray 61-24 to claim the third spot out of the district. Longhorns running back Joaquin Segovia had 14 carries for an eye-opening 317 yards with seven touchdowns.

District 1-2A Division I

The Panhandle Panthers claimed the outright District 1-2A Division I championship dismantling Sanford-Fritch on the road 56-27.

Panhandle started off the year 0-5, but found new life in district to go 5-0 and claim a second straight district title.

Panhandle (5-5) will play Floydada in the bi-district round at 7 p.m. Friday in Tulia.

The Panthers broke open a close game with the Eagles early exploding behind quarterback Landyn Hack. Hack helped his team score three unanswered touchdowns before the half and take a 35-13 lead at the break.

Hack had another stellar night both through the air and on the run. He finished his night completing 4-of-5 passes for 91 yards and a score, as well as tacking on 229 yards rushing on 17 attempts putting in four more scores for the Panthers.

Malachi Preston also got involved as he found the endzone three times, two of those on the ground, and another on a reception. Preston ended the night with 84 yards on 10 carries and 79 yards on only two receptions.