The West Texas A&M football players aren’t the only ones learning and adapting during the important stages of fall camp before opening the season against Texas College at 7 p.m., Thursday, Sept. 2, at Buffaloes Stadium.

“It’s gone better than I thought,” said Hughes, who is 20-19 overall through his first four seasons at WT. “It’s really been an easy transition in all honesty and the chemistry is really good. To get four new guys in so late, and for them to get along and get on the same page shows a tribute to our staff. They’ve made them feel comfortable, and made them feel at home.”

Former offensive line coach Cooper Bassett had been with Hughes since the staff arrived in Canyon in 2016, however, Bassett announced his departure for FCS school, Southeastern Missouri State in early July. Hughes didn’t hesitate finding his replacement in Harris. Harris arrived in Canyon two weeks after Bassett made his decision to move on.

“Finding housing has been crazy but my family and I are great now,” Harris said. “We love it here. That’s the nature of our business. Game week prep is always hectic, but I love this coaching staff. The offensive staff has been awesome, coach Hughes is great and made the transition seamless.”

Harris is a fan of the offensive linemen he has to work with in junior and Stratford graduate Parker Hanna, along with Tascosa grad and Kansas transfer Jacobi Lott. Harris says things are moving smoothly it’s just all about building trust within him and his players.

“Respect and relationships take time,” Harris said. “It doesn’t matter how long you’ve been here. I like to do a lot of things like having players come over and eat dinner with my family. It’s just about trusting each other and earning respect. We’re in that process now, but it’s going well.”

Andre Pope is considered the veteran of the new coaches. Pope, who is working with defensive backs, joined the staff from Shepherd University in April.

“I got here late in the spring for the final few practices, and the spring game,” said Pope, who played college football at West Georgia. “I love the people here. They make it great here. I love these facilities. It was sad to see a few of the guys leave, but I like the guys coach Hughes has brought in. We’re all learning together. The transition is beneficial.” 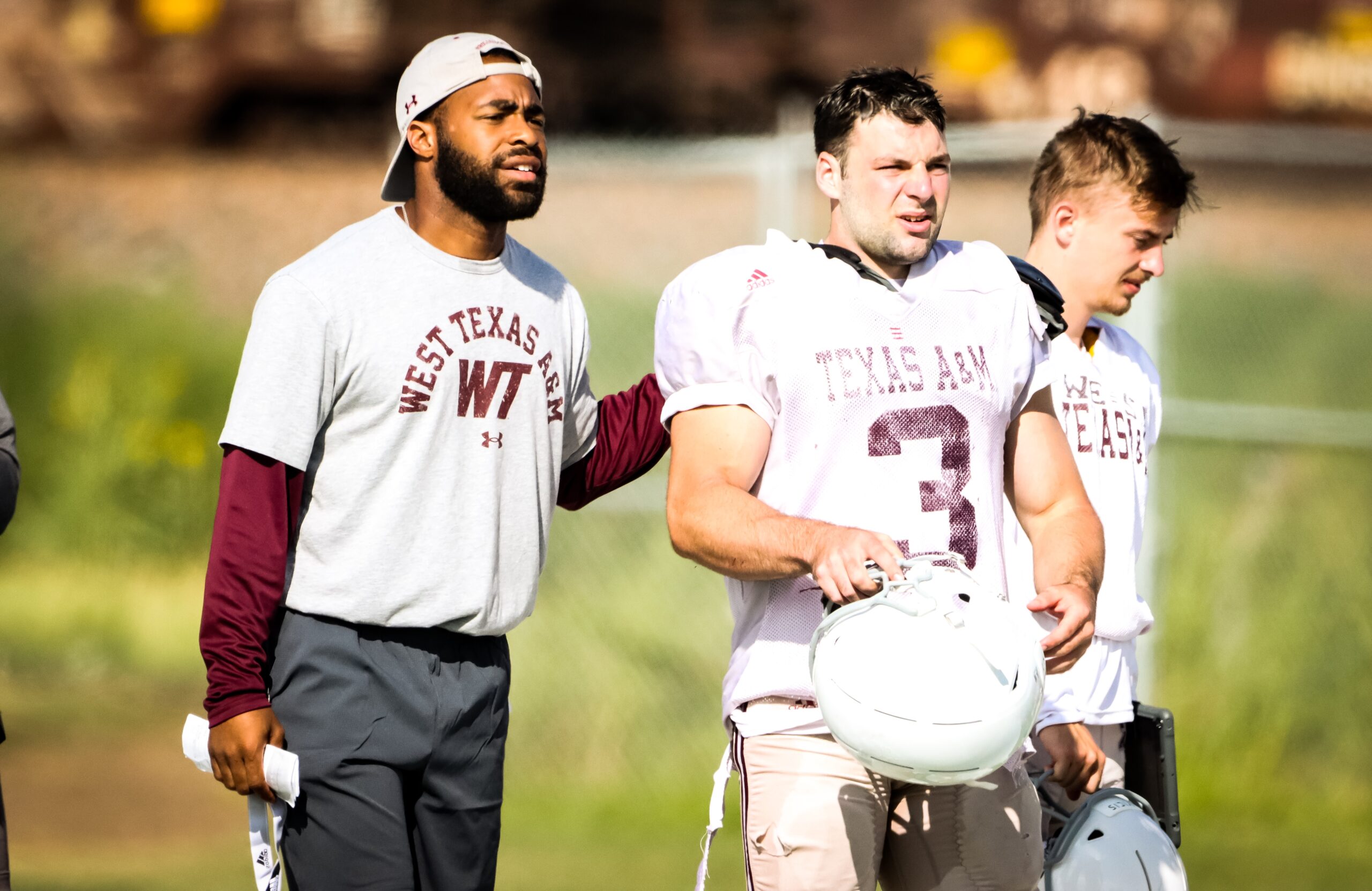 “Everything has been moving fast but you have to love it,” Parker said. “I’m coaching football with a great staff. I’m just learning as much as I can.”

Aidan Panni and Devan Demas are on the offensive side of the ball under the mentorship of offensive coordinator Russell Martin. Panni is coaching tight ends and Demas has the responsibility of a stacked backfield.

Panni recently coached at Gardner-Webb University, and like Hughes, is a Tennessee native.

“It’s been a crash course so far,” Panni said. “But, it’s been a great process. Coach Martin is an incredible offensive coordinator, and teacher. Being here the short time I’ve been here he’s been able to teach me so much and I’m picking it up.”

Demas is another new arrival fresh on the Canyon scene. Demas played his college football at Boise State, and is now loving coaching a loaded running back group the Buffs present.

“There’s been a lot of learning and adjusting on the fly,” Demas said. “But these guys adapt to anything I throw at them. I’m fortunate to have a veteran group of guys.”

The Buffs are set to host their second inter-squad scrimmage of fall camp at 8:30 a.m. Saturday at Buffaloes Stadium. The scrimmage is free and open to the public.