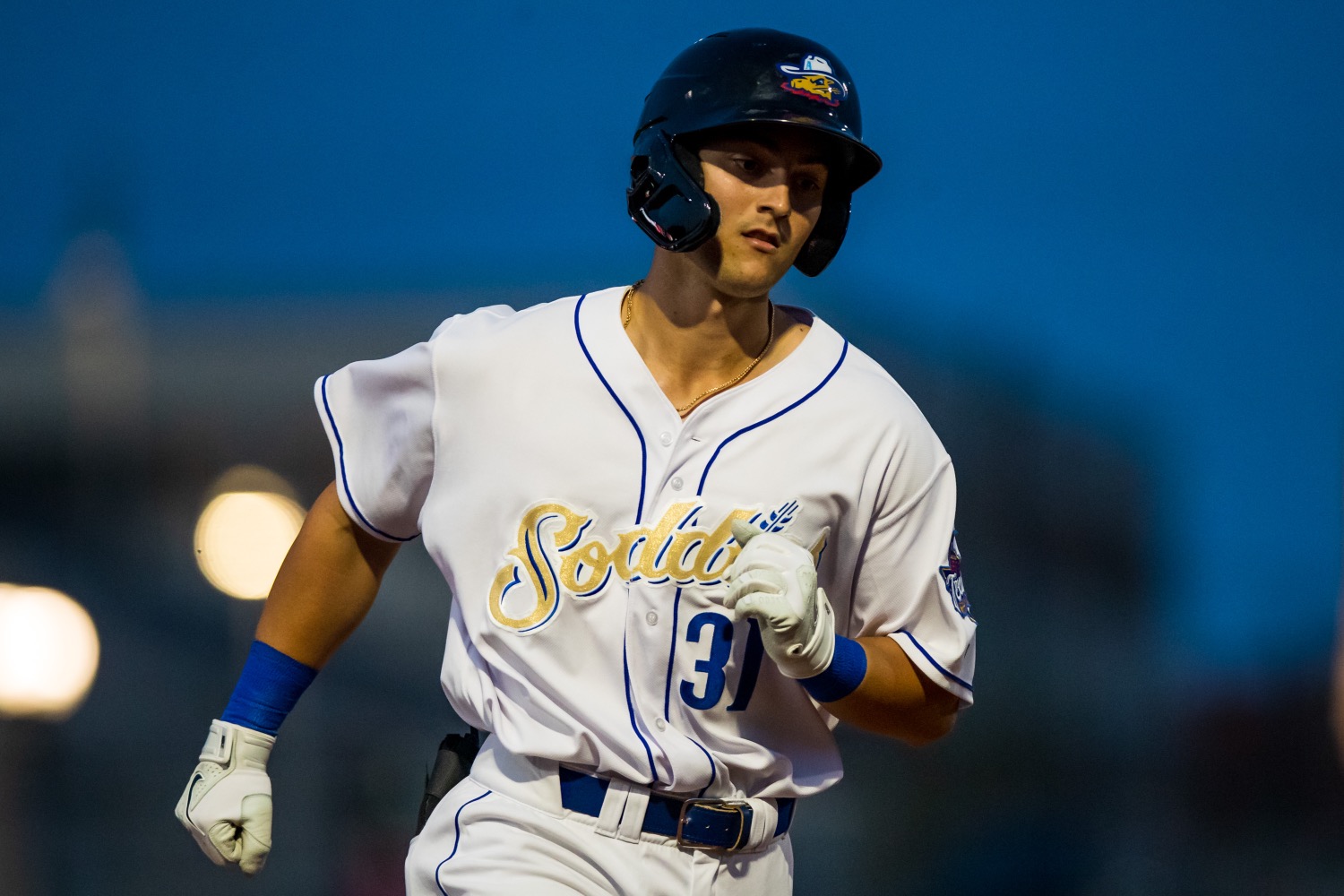 In terms of the home run derby at Hodgetown last weekend, it was at best a wash for the Amarillo Sod Poodles, and maybe even a victory for the Corpus Christi Hooks.

But with the Soddies claiming the last roundtripper to conclude an explosive offensive series Sunday evening, they were finally able to establish mastering their domain. And they did it for the second straight home series.

Dominic Canzone’s two-run homer in the bottom of the eighth gave the Sod Poodles their only lead of the series finale, which was enough for an 8-7 win over the Hooks. It was also enough for the Soddies (40-49) to clinch their second straight Double-A Central series win at Hodgetown.

It showed that the Sod Poodles, at least at the plate, have settled in at home, and can claim two wins in their last three series after winning only one series prior to that, the first one of the season at Tulsa.

“It’s great to see these guys come into their own and play really good baseball and get after it,” Sod Poodles manager Shawn Roof said. “It’s kind of getting late in the season and these kids are becoming really good hitters. The pitching’s really, really good but if you make a mistake they’re going to hit you, both teams. It’s just part of the maturation process for both the hitters and the pitchers.”

Saturday night, the Hooks (42-48) won a 12-6 slugfest, in which the teams combined to hit nine homers, breaking the Hodgetown record for combined homers in a single game. Corpus had five while the Sod Poodles had four, with Corpus Christi’s Scott Schreiber and Amarillo’s Dominic Miroglio (both hitting in the No. 8 spot) each hitting two homers.

Sunday wasn’t quite the homer festival, as the teams combined for seven. Still, that totaled to 30 home runs for the series (more than half of which came over the weekend), shattering the season’s series mark for homers at Hodgetown of 24, established June 15-20 when the Midland RockHounds came to town.

The Hooks got to Soddies left-hander Kenny Hernandez for three homers in four innings Sunday, including back-to-back shots by Matthew Barefoot and Corey Julks in the second inning, as they took a 6-1 lead.

Amarillo cut it to 6-4 with three runs in the bottom of the fourth, then tied it 6-6 on a two-run opposite field homer to right by Buddy Kennedy. But in the top of the eighth, Julks greeted Sod Poodles reliever Mack Lemieux with a towering blast to left for a 7-6 lead.

Corpus Christi’s Jose Bravo had thrown two scoreless innings of relief, but Geraldo Perdomo led off the bottom of the eighth with a double to left-center off Bravo. Canzone then hit one out to right for an 8-7 lead.

“It’s awesome this park, it’s a very hitter-friendly park,” said Canzone, who in 14 games with Amarillo is hitting .321 with three homers and 11 RBIs since getting called up from Class A Hillsboro. “I’m sure the pitchers don’t like that but as a hitter it’s very nice to see, especially coming from Hillsboro (Oregon), which is an absolute graveyard. It’s good to see the ball fly here.”

There is obviously a temptation to swing for the fences when so many balls leave the park in such a short span. Canzone doesn’t think too much about that.

“At the same time, when the ball is flying to all fields, you’ve kind of just got to stay through it and get it in the air as much as possible,” Canzone said. “If you get the ball in the air, you’ve got a chance to do some damage.”

Matt Brill relieved for the Sod Poodles in the bottom of the eighth and retired the first two batters, but things got dicey after he walked Brian Arias on four pitches then gave up a double to right to David Hensley (his third double of the game) to put runners on second and third. But Brill struck out Barefoot to end the game to preserve the win, and the series.

Perdomo, the No. 3 rated prospect in the parent club Arizona Diamondbacks system, played his first games back at Hodgetown since being recalled from the developmental list prior to last week. The Dominican shortstop was sent to the development list in Arizona after struggling at the plate most of the season.

Since his return, Perdomo is hitting .290 with a homer and five RBIs. He started the scoring for the Sod Poodles on Sunday with a solo homer in the second, his first homer at Hodgetown this season.

It was a wild offensive series, as the winning team scored at least eight runs in five of the six games. In the one game that didn’t happen, another Sod Poodles record was still set.

Thursday’s game was delayed two hours by rain, and as a result was shortened to seven innings. But that didn’t stop Sod Poodles right-hander Ryne Nelson from putting his name in the record books.

Nelson worked only five innings in the shortened game, but put up numbers which would have been impressive in a full game, striking out 12 and allowing only three hits in a 3-1 victory. The strikeouts were a franchise record for a single game, as Nelson broke the team record of 11 he previously shared with Bryce Jarvis and Drey Jameson, all set earlier this season.

Even that game was dominated by the long ball though, as all four runs came via home run. Alek Thomas led off the bottom of the first with a homer to get the Soddies on the board, and Stone Garrett hit a two-run shot in the fourth which ended up making the difference.

Two players were called up to Triple-A Reno and two were called up from Hillsboro to replace them. Thomas, an outfielder, and right-hander Luis Frias were both sent to Reno.

The No. 4 rated prospect in the Diamondbacks system, Thomas batted .284 with 10 homers and 41 RBIs, while Frias recorded a 5-6 record with a 5.26 ERA and 91 strikeouts in 78.2 innings. Frias also threw the first no-hitter in Hodgetown history by beating the San Antonio Missions on Aug. 1.

They will be replaced on the roster by outfielder Eduardo Diaz and right-hander Brandon Pfaadt, who will join the Sod Poodles for their road trip to Midland starting Tuesday.

For the season, 229,941 fans have crossed the turnstiles at Hodgetown. If they maintain their average for their next home series against Frisco starting Aug. 24, they’ll pass the 250,000 mark for the season before the end of the month.