Canyon finds a way to knock off Springtown 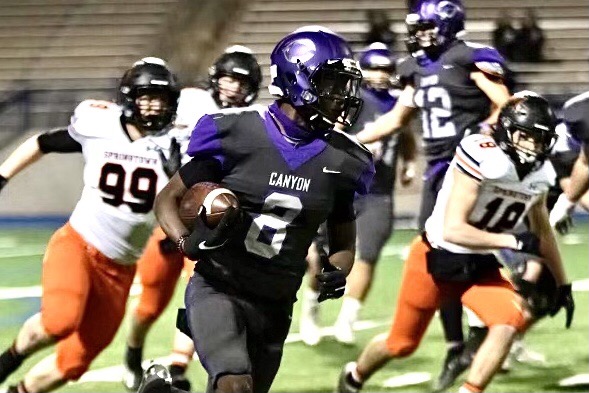 Canyon reciever Joe Shaw (8) takes a screen pass for a touchdown against Springtown during a Class 4A Division I state quarterfinal in Midland on Friday night. [Jasinia Frausto/ For Press Pass Sports]

Great football teams find a way no matter the circumstance.

Canyon lost starting quarterback Jay Defoor to an injury on the opening drive, and the defense had their back against the wall on multiple occasion Friday night.

But in the end the Eagles did just enough to gain a thrilling 17-14 win against Springtown in a Class 4A Division I state quarterfinal at Midland’s Grande Communication Stadium.

Canyon (12-1) claims the Region I championship with the victory, and are headed to University Interscholastic League Class 4A Division I state semifinals for the first time since 2006.

The Eagles will meet the Paris-Argyle winner in next week’s semifinal. Paris and Argyle meet up at 6 p.m. Saturday night at McKinney ISD Stadium.

This contest came down to the wire keeping fans on the edge of their seat for all 48 minutes.

Canyon trailed 14-7 heading into the fourth quarter, leaning on backup quarterback Derrek Clements. Clements entered the game in the first quarter for starter Defoor who left during the games opening drive after taking a hard hit.

Clements stepped up and helped the Eagles tie the game on a quick screen to receiver Joe Shaw. Shaw to the screen, found the edge and went 40 yards to tie the game, 14-14, giving Canyon new life early in the fourth quarter. With Springtown (11-3 overall) driving down to the Eagles 20-yard line, Canyon safety Jett Meek forced a fumble getting the Eagles the ball back. Clements marched Canyon’s offense down to the Porcupines 30-yard before the drive stalled with 3:55 to play. Canyon coach Blake Bryant leaned on sophomore kicker Elijah Smothermon, who came in and drilled a 40-yard field goal, lifting the Eagles to a 17-14 lead with 3:46 to play.

“I’m so proud of Elijah, and for our team,” Bryant said. “Here’s the deal. We’ve been saying all week that we had to believe. We were going to believe no matter what. We sent Elijah out there and we believed he’d make it, and he did.”

Canyon’s defense came through again on Springtown’s final drive. As the Porcupines tried to move down the field and answer, Eagles defensive lineman Brody Olsen stripped quarterback Camden Chesney at the Eagles 45-yard line as the Eagles recovered with 1:48 to play.

“When we left our sideline after halftime we just knew we were going to find a way,” Bryant said. “Hats off to Springtown. They are an incredible team, and played unbelievable. We just made one more play.”

Clements was able to kill the clock connecting to Jack McKay on a clutch third down conversion, and held on. McCay made big catches the entire night, finishing with four snags for 94 yards. Cook ran for a team-high 103 yards against a very solid defensive unit from Springtown. Clements played admirably in relief of Defoor throwing for 191 yards with two TD tosses.

Support our mission
Previous articleLeaving Childress in a Hayze: Hufstedler runs Canadian back to state semifinal
Next articleFive takeaways from Texas Tech’s win in season finale against Kansas