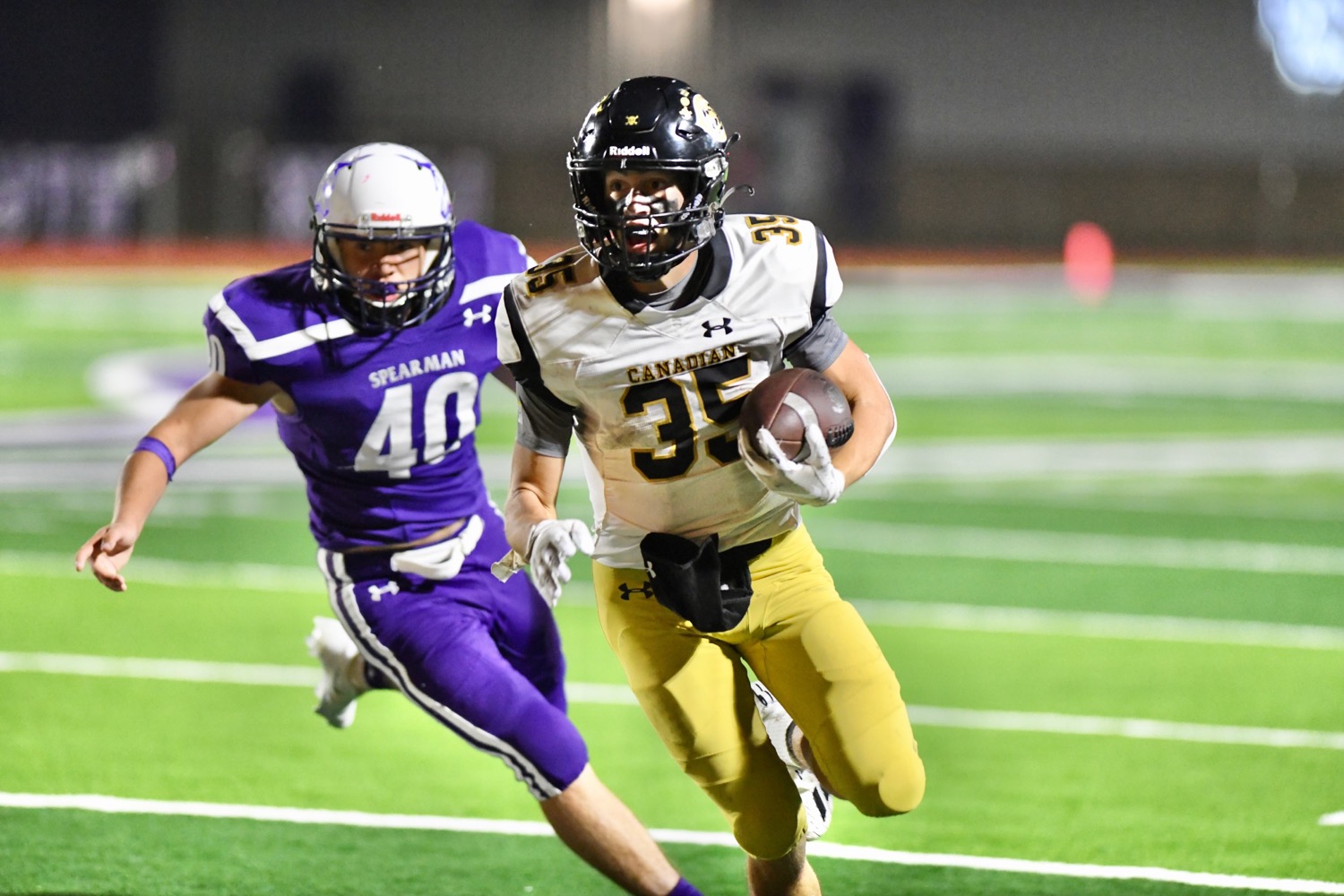 Spearman gave No. 8 Canadian everything it wanted and them some in an epic District 3-3A Division II clash Friday night.

But the Wildcats were able to dig deep putting together a near perfect final drive that resulted in an EmilianoHernandez 18-yard field goal with 12 seconds to play as the Wildcats escaped a Spearman upset bid, 38-37, at Lynx Stadium.

The Wildcats immediately answered on the back of Luke Flowers. On Canadian’s ensuing drive, Flowers broke off a 22-yard touchdown run cutting the lead, 30-28. To open the fourth quarter, Flowers once again found pay dirt on 2-yard TD, as Canadian took only its second lead of the night, 35-30.

The Lynx didn’t go away. With a little under six minutes left in the contest Seaman went to their air once more finding Brayden Klafka for a 30-yard pitch and catch putting the Lynx back on top 37-35 with 5:33 left.

However, as this game went it seemed whoever had the ball last had the best chance to win, and that’s exactly what happened. Starting at their own 34-yard line, Canadian sophomore quarterback Camren Cavalier engineered a time consuming 14-play, 63-yard drive over the final five minutes. Cavalier connected twice to receiver Angel Garcia for big yards, Flowers chewed up yards that help put the Wildcats at the 1-yard line with 15 seconds remaining allowing Hernandez to knock through the game-winning field goal for the 38-37 victory.

This epic battle wasn’t the cleanest of games on a damp night. Canadian and Spearman combined for six turnovers, and the Wildcats had 12 penalties for 112 yards.

Both offenses also put on exhibitions. Canadian totaled 697 yards, rushing for 436 yards and passing for 261.

Spearman tallied 500 yards of offense, with 469 of those torching the Wildcats secondary through the air.

Flowers was definitely a difference for Canadian. The sensational sophomore delivered when called upon rushing for 205 yards on 27 carries with three touchdowns. Cavalier completed 22-of-38 passes for 261 yards, but did throw his first pick of the season. Garcia was Cavalier’s main target snagging a season-high 12 catches for 130 yards, and Hernandez was a perfect 5-for-5 on extra-points before sending Canadian home with his winning 18-yard field goal.

Spearman sophomore QB Carson Seaman did all he could going 16-of-33 for 432 yards passing with four touchdowns to three INTs. Klafka was all over the field making six catches for 101 yards and a score, and Cade Seaman caught two balls for 106 yards and a TD.

Childress remains unbeaten on the season as the Bobcats dominated Highland Park in a District 3-3A Division II contest, 64-8, on Friday night at Hornets Stadium.

Mathis ended his evening gashing through the Highland Park defense for 214 yard on 12 carries.

Teammate and receiver Lamont Nickelberry returned a punt 72-yards for a score, and added a 55-yard touchdown catch from quarterback Collin Bishop. Bishop was superb through the air completing 9-of-13 passes for 167 yards with two TD passes in a short night of work.

Childress, one of five Texas Panhandle teams that remain undefeated improves to 5-0 overall, and 2-0 district.

The Hornets are still seeking their first win falling to 0-6, 0-2.

A two hour rain delay didn’t slow the Tulia Hornets down one bit.

Tulia jumped all over Dimmitt early and never looked back for a 56-0 District 3-3A Division II win Friday night at Bobcats Stadium.

Tulia showed complete balance in the victory piling up 373 yards of offense — 190 on the ground with 183 through the air.

Running back Damian Cedillo blasted the Bobcats defense with 12 totes for 144 yards with three trips to pay dirt. Quarterback Travon McCaslin kept up his fantastic season completing 10-of-16 passes for 183 yards and a score. The junior also added two rushing TDs to his night. Teammate Adrian Brookins was key as well making two big catches for 80 yards and two touchdowns. 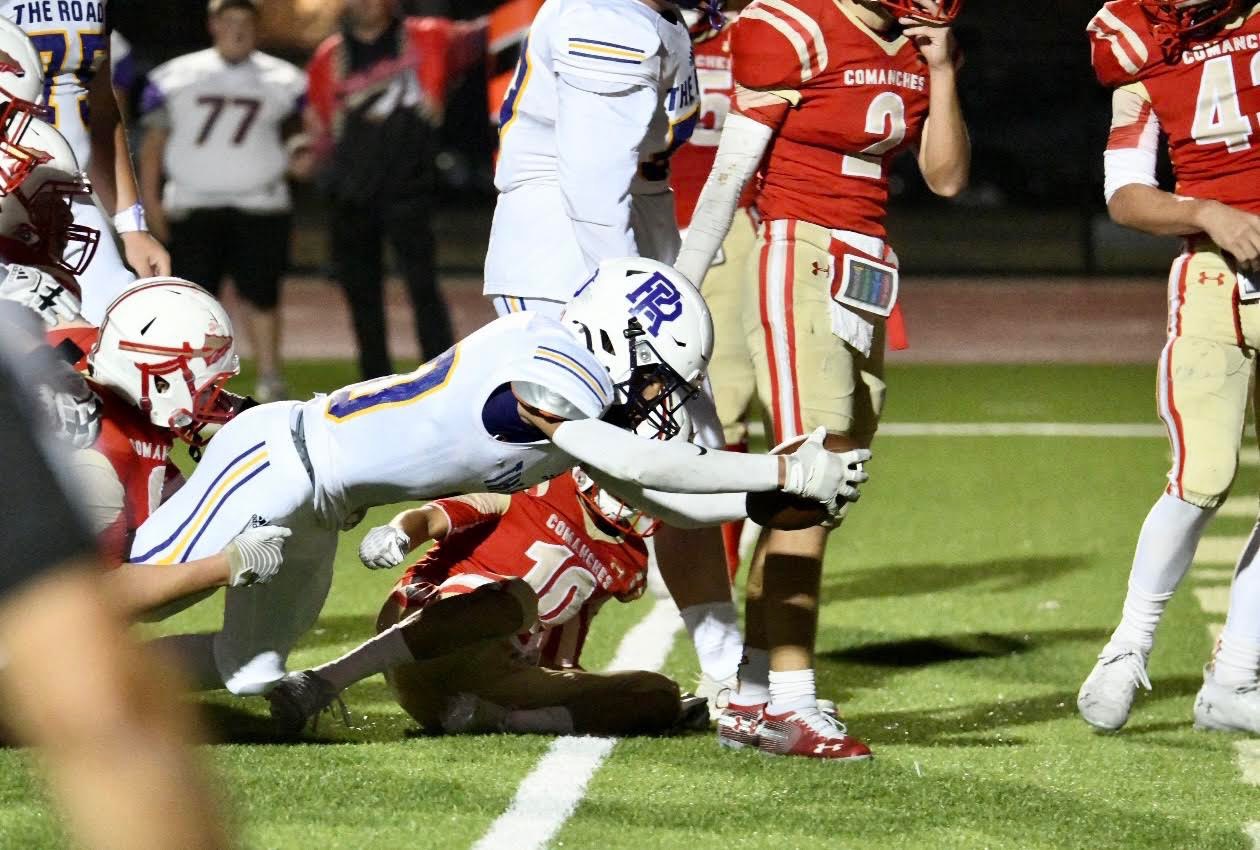 The Wildcats close out non-district play at 3-2 overall, while WT High is still in search of its first win falling to 0-5.

River Road’s heavy run attack overwhelmed the Comanches. The Wildcats totaled 579 yards on the night with 464 of those coming from a fierce duo of running backs. Senior standout Elliott Brown went over the century mark for a third straight contest. Brown scored the Wildcats first four touchdowns, finishing with 180 rushing yards and five touchdowns.

Teammate Dylan Frye added 145 yards rushing with a score of his own. Quarterback Lico Delgado was an efficient 9-of-14 passing for 114 yards.

The Stratford Elks are in the midst of another special season, and it continued Friday night going on the road and dismantling Dalhart, 38-13, at Wolves Stadium.

The Elks nearly doubled the amount of yards of the Golden Wolves, pacing Dalhart 412 yards to 219.

Stratford’s Code Rinne and Zane Burr sparked an offense that scored 31 unanswered points after trailing 13-7 in the second quarter.

Burr punished the Golden Wolves defense with his physical running going for 149 yards on 24 carries with a pair of touchdowns. Rinne was a also a factor piling up 121 yards and a score on 16 carries, as well as completing 5-of-9 passes for 40 yards with another TD.

Rinne also had an interception on the defensive side of the ball as did teammate Alfredo Duarte Stratford’s defense continued to be a force holding the Golden Wolves to 219 yards of total offense.

Stratford ends the non-district portion of the schedule at 5-1 overall. Dalhart’s struggles continue at 1-5.

Bushland put itself in an early two touchdown hole Friday night, and never could recover as the Falcons saw a three-game win streak come to an end at the hands of Lubbock Estacado, 31-21, at PlainsCapital Park at Lowrey Field in Lubbock.

Estacado (3-3) pushed the Falcons (3-2) up-and-down the field for three quarters on the way to building a 31-7 lead, using big plays on offense and a stifling defense that produced a couple of first-half turnovers.

The Matadors racked up 349 yards total offense behind a near-unstoppable running game. It started from Estacado’s first play when freshman running back Bobby Ross broke loose for a 49-yard run and didn’t stop until the Matadors had racked up 227 yards on 36 carries.

Falcons quarterback Brian Marrell did what he could throwing for 226 yards, while rushing for 116 yard. Receiver Kash Bradley snagged 10 catches for 137 yards.

Wes, the son of former Muleshoe legendary coach David Wood, who the Mules field is named after, made his return for the first time to Muleshoe since he was an assistant coach of the Mules. Wes also led Muleshoe to its only state championship in 2008.

After a near two hour rain delay, Snyder (5-1) jumped out to a 19-0 lead only to see Muleshoe close the gap, 19-13 by halftime with back-to-back touchdown tosses from Zach Hasley to Irvin Torres.

The Tigers maintained the lead throughout, but Muleshoe had a chance down 38-33 with 2:48 left in the game and driving before a Hasley pass was intercepted. That led to a Snyder insurance score that sealed the victory.

Despite the loss, Hasley threw for 324 yards with five touchdown passes, but did have three interceptions. 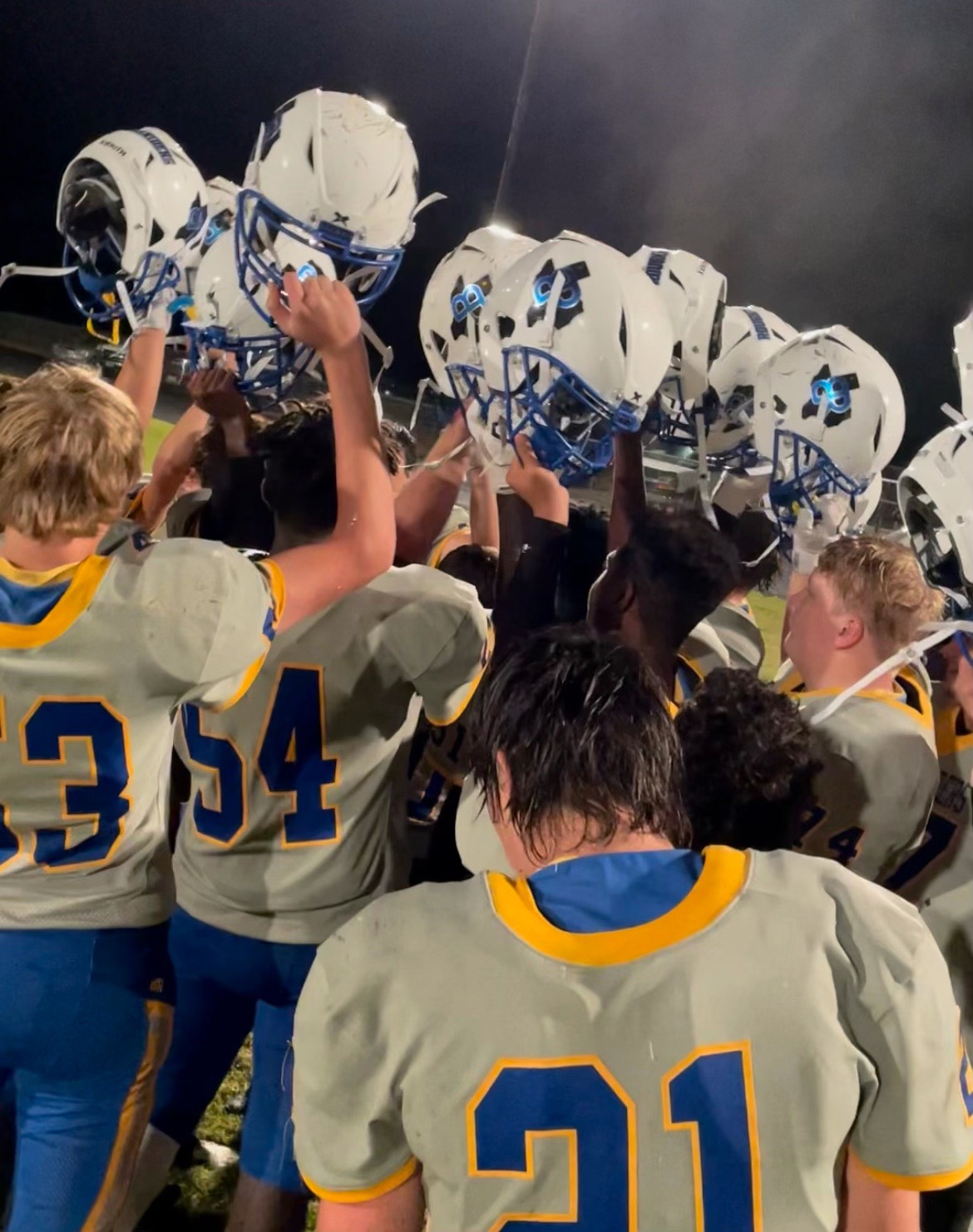 It all came together for the Boys Ranch Roughriders on Friday night in Booker.

A 49-game losing skid dating back to 2016 is no more, as Boys Ranch blasted Booker 38-14 for an well overdue victory that won’t soon be forgotten.

The Roughriders can say goodbye to the state’s longest losing streak, and second-year head coach Aaron Wampler can say hello to his first career W. Wampler says its a tremendous feeling for not only his team, but the entire community of Boys Ranch.

“Our community was waiting on us when we got home late Friday night,” Wampler said. “The football lights were on, music was blaring, it was awesome. It just shows you how special this place is. I told the guys this losing streak is something they inherited. It’s been a dark cloud, and It’s taken them a while to get over it. But this isn’t who they are. We’ve been preaching that to them.

Our guys win in a lot of areas. They are great in the classroom, there aren’t any home issues and, and they win in all forms of life. We’re so happy it translated to the football field. We were very selfless against Booker, and played great, and did what we were suppose to do.”

The Roughriders (1-4) never made this a contest building a 24-0 first quarter lead, extending the advantage, 30-0 by halftime.

The combo of Isaiah Brown and Jayden Slater did most of the damage. Brown threw for 336 yards on 16-of-26 passing with three touchdowns. Slater hauled in all three TD tosses, finishing his career effort with 11 catches for 248 yards.

Defensively, Rowdy Barnes was all over the field making 27 tackles with three of those for a loss. 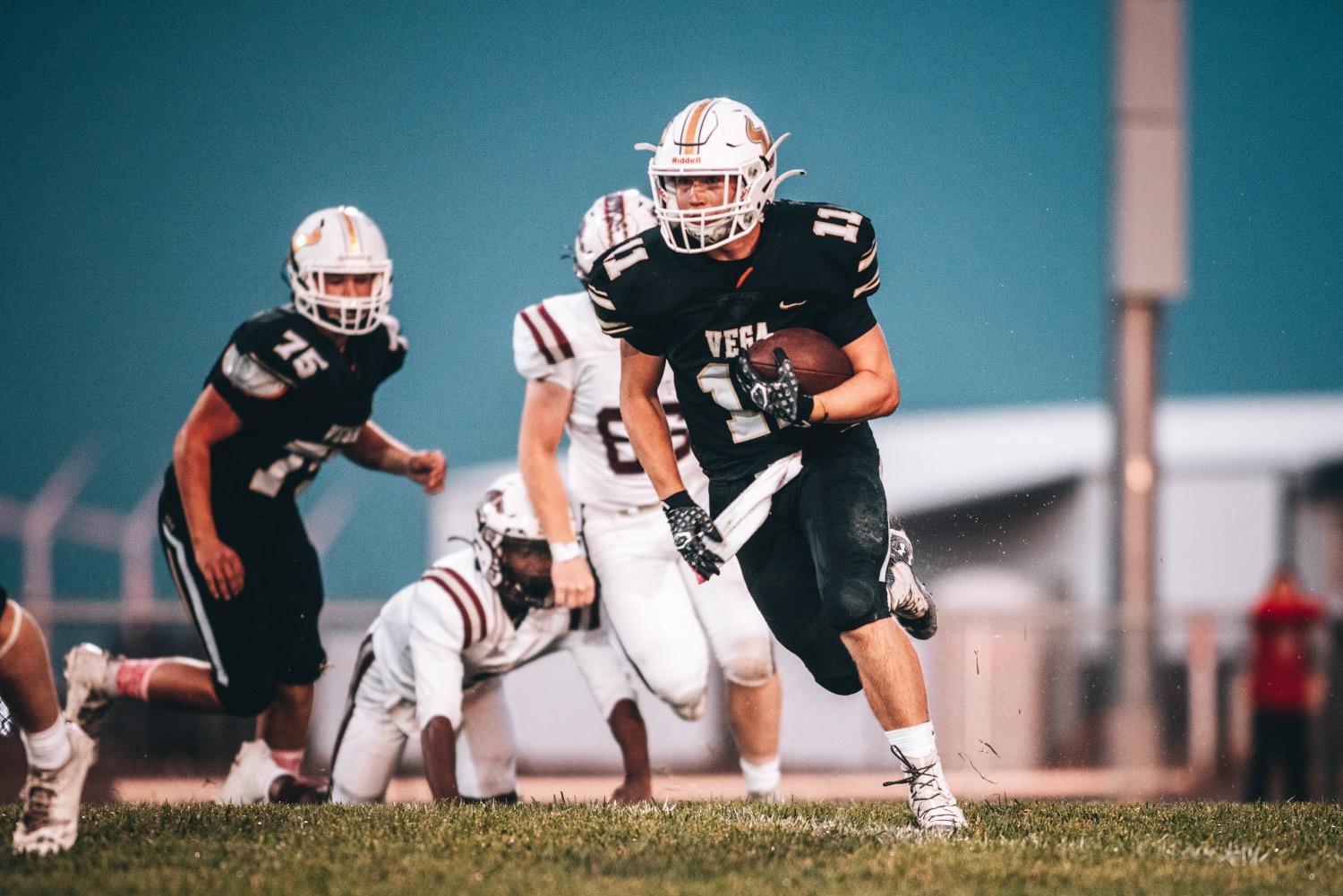 In a Class 2A Division II showdown, Vega handled the wet and soggy field conditions admirably as the Longhorns looked very impressive on the way to a 34-14 home win against previously unbeaten Clarendon on Friday night.

Ryan Grawunder has been marvelous this year, and was once again against the Broncos (5-1) defense. Struggling to throw because of the wet conditions, Grawunder, behind a tremendous effort from his offensive line, torched the Clarendon defense for 191 rushing yards with four touchdowns, his longest coming on the games opening drive of 56-yards.

The Longhorns (5-1) were able to hold the high-powered Clarendon offense to only 136 yards on the night. Benefiting from the rain, the defense took advantage of the tough offensive night and held the Broncos to 14 points on the night.

The Wellington Skyrockets are back in full stride as they took out Valley View 47-7 down in Wichita Falls City View Friday night.

Per usual, Marc Ramirez has things going on the ground for the Skyrockets picking up 121 yards and two touchdowns on only 11 carries. Ramirez was complemented by Barret Phillips, who added on two scores on the ground as well as 74 yards on seven carries.

Wellington held Valley to under 200 yards of offense.

Gruver continues to turn heads this season as the Greyhounds remained undefeated with a convincing 40-7 win at Nicholson Field in Wheeler on Friday.

Trailing 7-6 after the first quarter, Gruver was able to separate itself from the Mustangs thanks to a 21-point second quarter for a commanding 27-7 halftime lead.

Quarterback Mason Gibson was on point finishing his night with 156 yards passing and three touchdowns.

On the receiving end of those passes was Colton Millsap and Andress Been. Millsap finished with four catches for 84 yards and a score as Been finished with 3 receptions for 72 yards and two touchdowns catches.

Gruver (5-0 overall) is one of only five remaining Texas Panhandle teams left with an unblemished start to 2021. Wheeler drops to 3-3.

The Shamrock Irish may bounced back in a big way from a season-opening loss last week jumping all over Sunray for a 70-28 win at El Paso Stadium in Shamrock on Friday night.

The Irish offense exploded, dominating the ground game while being efficient through the air. Together, the duo of Sean Wright and Caden Peevy lead the way for Shamrock combining for four touchdowns. Wright accumulated 182 yards rushing on 10 rushes with his two shares of the scores. Peevy on the other hand finished with 16 carries for 148 yards and his two scores. Irish quarterback Kit Macina was efficient on his opportunities finishing 8-of-10 through the air for 152 yards and three touchdowns on the night.

Shamrock closes out an impressive non-district schedule at 5-1 overall. Sunray falls to 3-3.