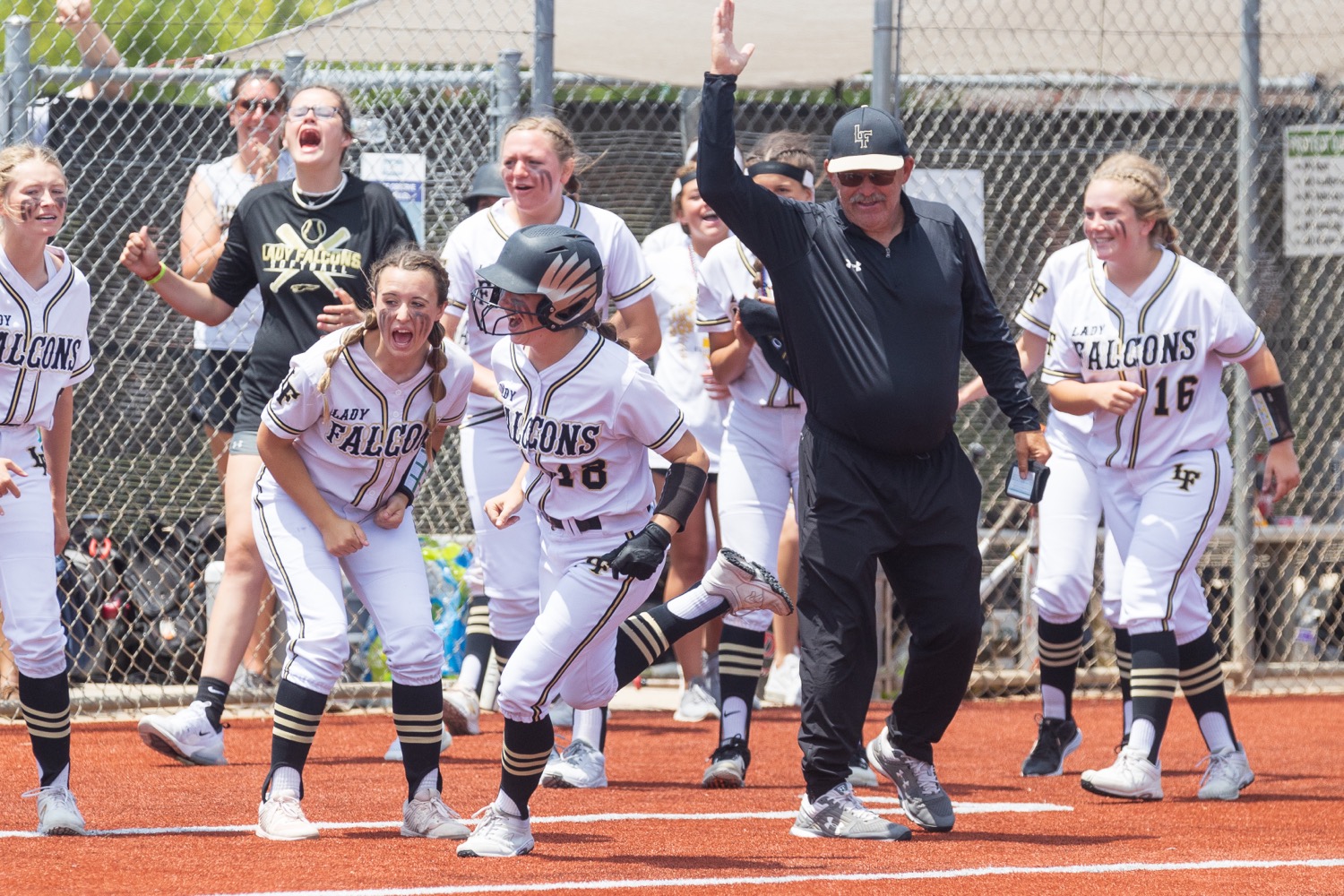 Bushland’s Jaycee Adams (18) rounds third base after hitting the Lady Falcons UIL record-breaking 83rd homer of the season during a 20-10 win against Idalou in a Class 3A regional quarterfinal on Saturday at the Caprock Softball Complex. [Tom Carver Press Pass Sports]

The No. 10-ranked Bushland Lady Falcons lineup proved they can do a little bit of everything when called upon during its impressive two-game sweep of No. 5 Idalou in the Class 3A regional quarterfinals Friday and Saturday.

Bushland used small ball during Friday’s Game 1 to nab a 9-2 win against the Lady Wildcats at Lubbock High, then broke out the big bats for a 20-10 run-rule victory to clinch the series on a windy Saturday at Caprock’s Softball Complex.

History was also made by the Lady Falcons during Saturday’s win in front of a packed stands of an estimated 500 fans.

The sister combo of Brylee and Jaycee Adams each delivered blasts that helped set a new University Interscholastic League record for homers in a season.

Brylee’s 3-run homer in the bottom of the fourth gave Bushland 82 on the year, tying Canyon’s mark from 2017. Jaycee followed in the fifth with a 2-run shot to left center setting the new record with 83.

“In the moment we didn’t really realize it,” Jaycee said. “Later in the dugout we realized we broke the record. But I’m happier about getting a win with my team, and we can keep playing.”

Game 2 started off sluggish for the Lady Falcons. Early errors put Bushland in a 4-0 hole to Idalou heading into the bottom of the third. However, with one swing of the bat from Corley Carr the entire game changed.

With one out in the third Carr drove a pitch to left field off pitcher Belle Arguello that looked to be an innocent single. The ball took a spin off the turf and got past left fielder Ashton Molinar rolling to the wall. Carr turned on her jets and was waived home by head coach Scott Tankersley. The senior scored an inside-the-park homer standing up, putting Bushland on the board swaying the momentum on the side of the Lady Falcons.

“Their pitcher threw me inside,” Carr said. “It jammed me but I was able to drive it to left. All of sudden coach Tankersley is giving me the go sign, and I just went. After that I think it grew our confidence and we knew we had this.”

“That play changed everything,” Tankersley said. “That sparked our energy. That got our offense going, and here came the home runs afterwards. It’s special to win here at Caprock. I’m inspired to win here, we had a great crowd, and it got me emotional.” 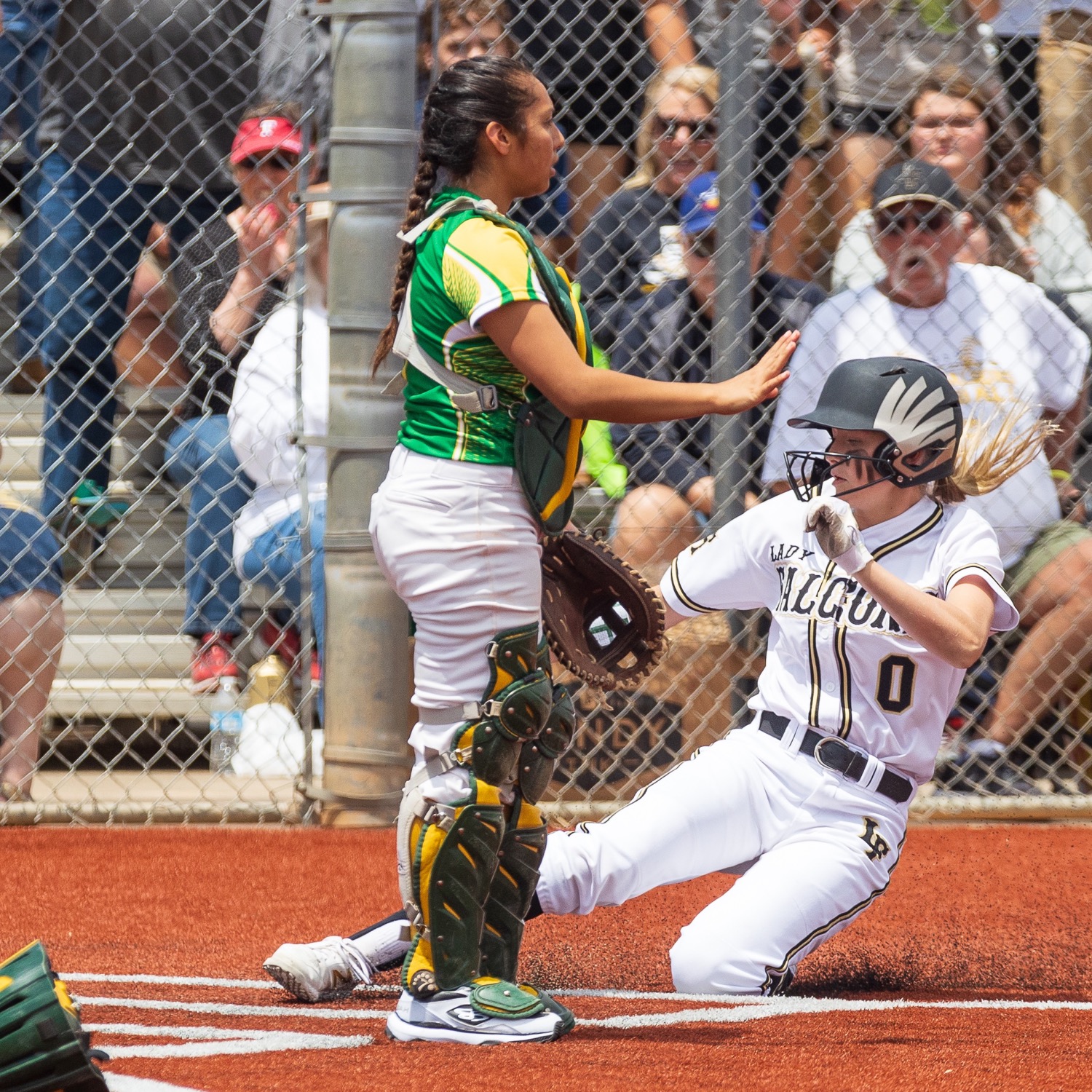 Bushland put up five runs in the third to take a 5-4 lead. Thanks to Brylee’s 3-run homer in the fourth, Bushland led by a 10-4 count but with the wind blowing dead out no lead was safe.

Idalou battled back in the top of the fifth. Amanda Peralez hit a 2-run homer to left, then teammate Hailey Van Bleekun added a 3-run blast to tie the game up at 10-10.

The Lady Falcons didn’t blink, answering in a huge way in the home half of the fifth highlighted by Abby’s Howell’s 14th homer of the season on a 3-run bomb to left center field. Bushland plated nine runs in the fifth taking a 19-10 lead and putting the game out of reach for Idalou (24-4).

“That shows the character in our team,” Tankersley said. “They are so resilient, and I always tell them, take it inning by inning. Win the battle every inning to win the war.”

Carr finished the game 3-for-4 with an inside the park homer and a triple, scoring four times. Jaycee was 3-for-5 with five RBIs in Saturday’s victory.

Bushland improves to 29-2-1 overall and will now face Jacksboro (32-8) in the regional semifinals at a time and place to be determined.