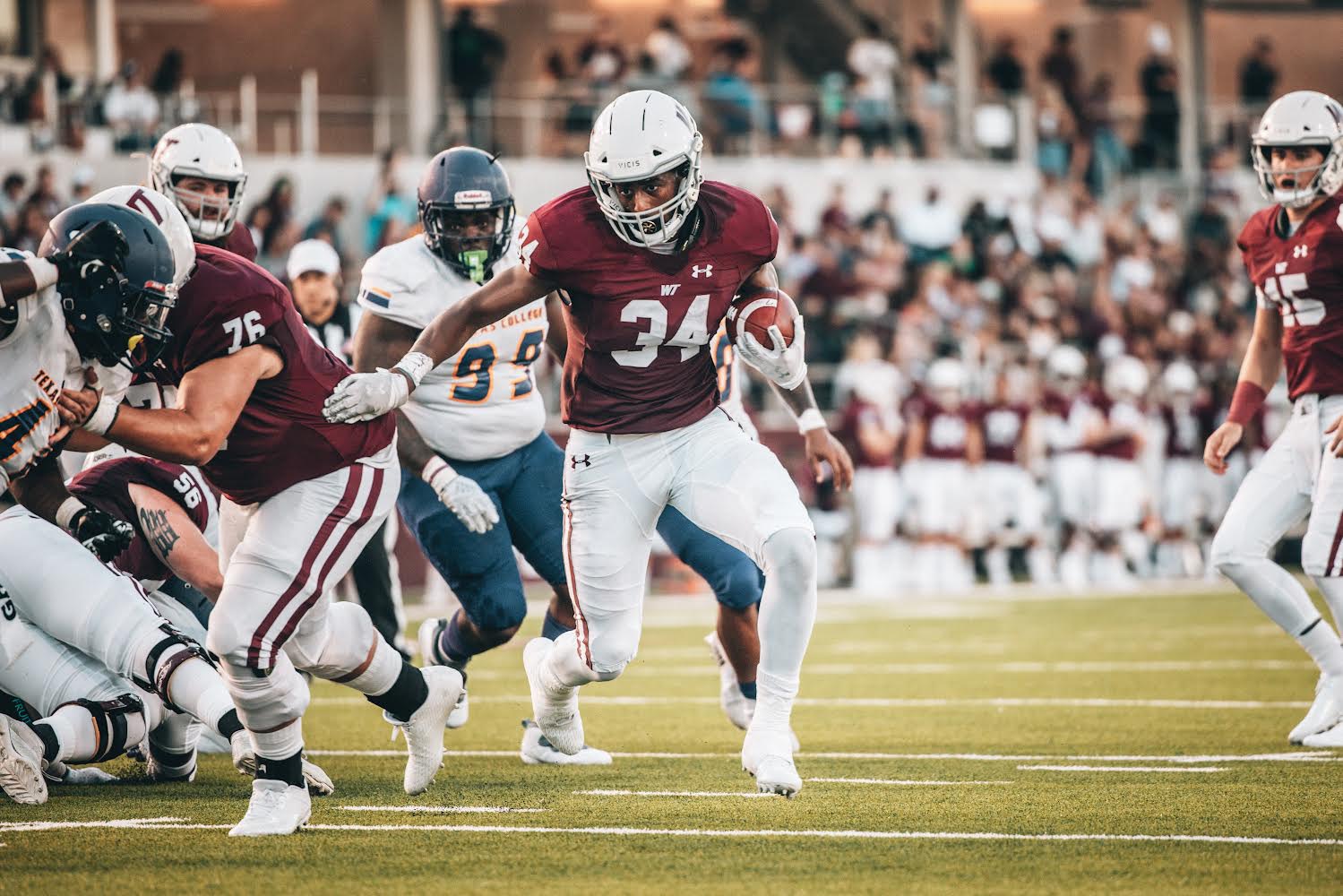 It was everything West Texas A&M could ask for to open the 2021 season Thursday night.

From Khalil Harris busting a 69-yard touchdown run on the first play from scrimmage to the defense not allowing Texas College a first down in the first half, the Buffs simply outmatched the Steers in every phase of the game possible on the way to a 73-0 route sending an announced crowd of 5,058 fans at Buffaloes Stadium home happy.

“We started fast,” WT coach Hunter Hughes said. “We wanted to make a statement and I think we did that.”

On the very first play of the game, Harris took a handoff and found a huge hole on the right side, made a spin move on a defender at midfield, then turned on his speed for a 69-yard score putting the Buffs up 7-0 not 20 seconds into the contest. The Harris touchdown ignited the offense that went on to rack up 52 points in the first half, scoring on every possession.

“I felt like we were ready to play,” Hughes said. “I didn’t think the points would keep snowballing like they did. I’ll look at film and I’ll find mistakes, but our execution was very good.”

Harris ended his night with a game-high 111 yards with two touchdowns on only seven carries.

Quarterback Nick Gerber was extremely efficient in his half of work going 10-of-11 for 150 yards with a pair of TD tosses to Markell Stephens-Peppers of 11 and 36 yards.

“It was great finally to play someone else,” said Gerber, a Levelland graduate who is in his third year as the starting QB. “We love being in front of our fans. I think the offense played well. The offensive line dominated, our receivers ran the right routes. We still have a lot to get better at for next week.”

The defense played as well as the offense. The Buffs front seven had relentless pressure on quarterback Jerry McConico Jr, and stifled Texas College the entire first two quarters holding the Steers without a first down, and to two total yards.

“We really didn’t know what they were going to do,” Hughes said. “We had to figure it out and our guys got after them.”

Stats of the night

The Buffs racked up 534 yards on 53 total plays Thursday. WT did most of its damage on the ground, totaling 384 yards on 39 team carries.

The WT defense allowed 102 total yards with only 28 of those coming on the ground. Texas College never converted a third down, going 0-for-9. Senior defensive back Ayrton Payne made a game-high six tackles with an interception. 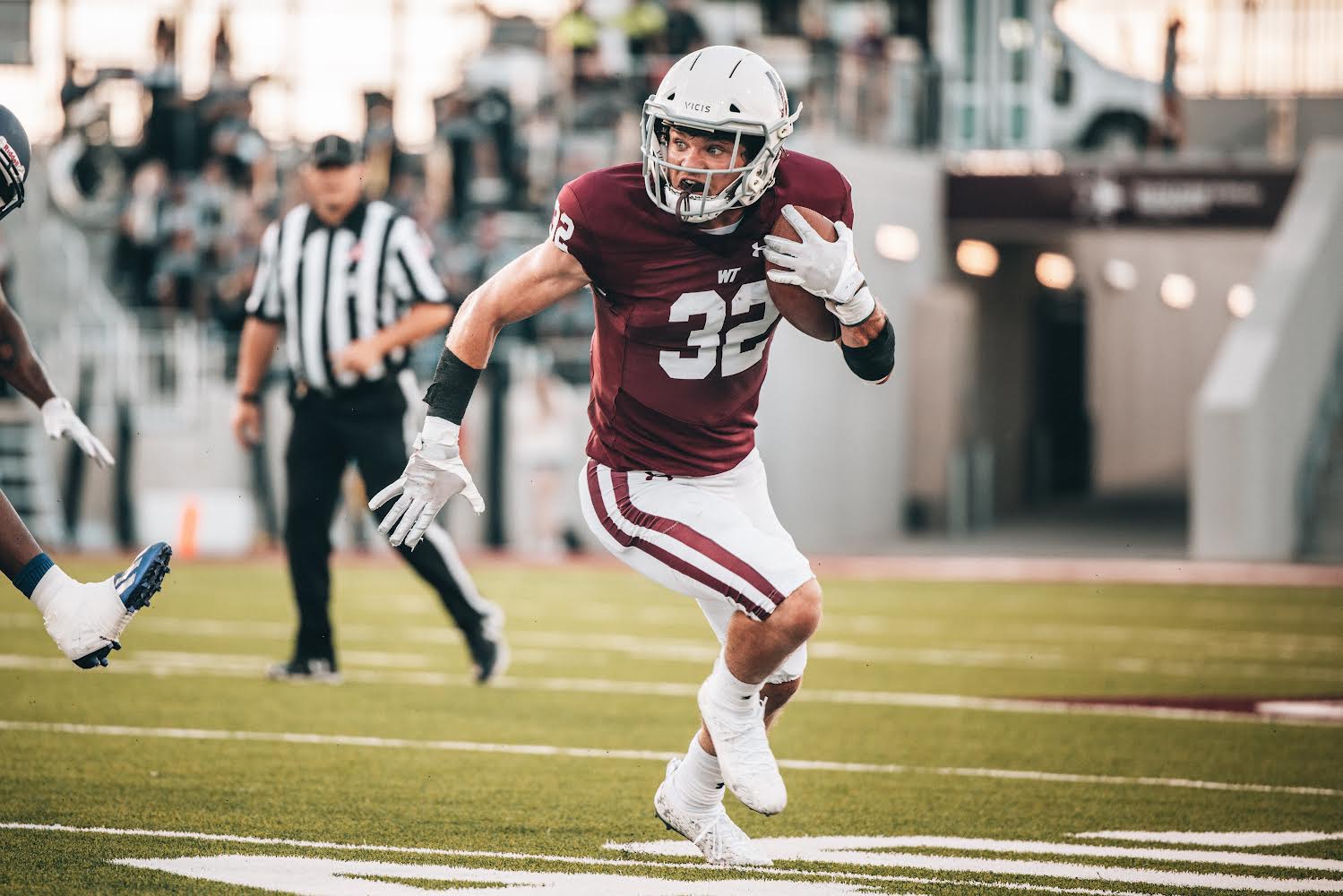 Wheeler graduate Hesston Marshall made quite the impact in his first career collegiate football game Thursday. Marshall returned kickoffs and punts, and even picked up five carries out of the backfield for 38 yards in the third quarter.

The former Wheeler star who rushed for over 6,000 yards in high school, had a 50-yard punt return that set up a score in the first quarter, and punched in his first career college touchdown in the third quarter on a 12-yard scamper.

To top it off, Hughes was so impressed with Marshall during fall camp, he elected the freshman as a captain for the coin toss.

“Hesston has done a lot of things right,” Hughes said. “He’s proved himself. So I thought rewarding him would be something special.”

The Buffs return to the gridiron when they open Lone Star Conference schedule against UT Permian Basin at 6 p.m., Saturday, Sept. 11, at Ratliff Stadium in Odessa.

West Texas A&M wasn’t the only Lone Star Conference team opening the season Thursday. The No. 8-ranked Texas A&M-Commerce Lions went on the road and used four field goals from kicker Jake Viquez to down No. 19 Colorado State-Pueblo in a defensive battle, 12-6.

Angelo State was very impressive in its season opener doubling up Lindenwood, 40-20 at home. Rams running back CJ Odom rushed for 132 yards with a touchdown.

The West Plains volleyball team opened their inaugural season with a pair of wins on Tuesday night.
Football