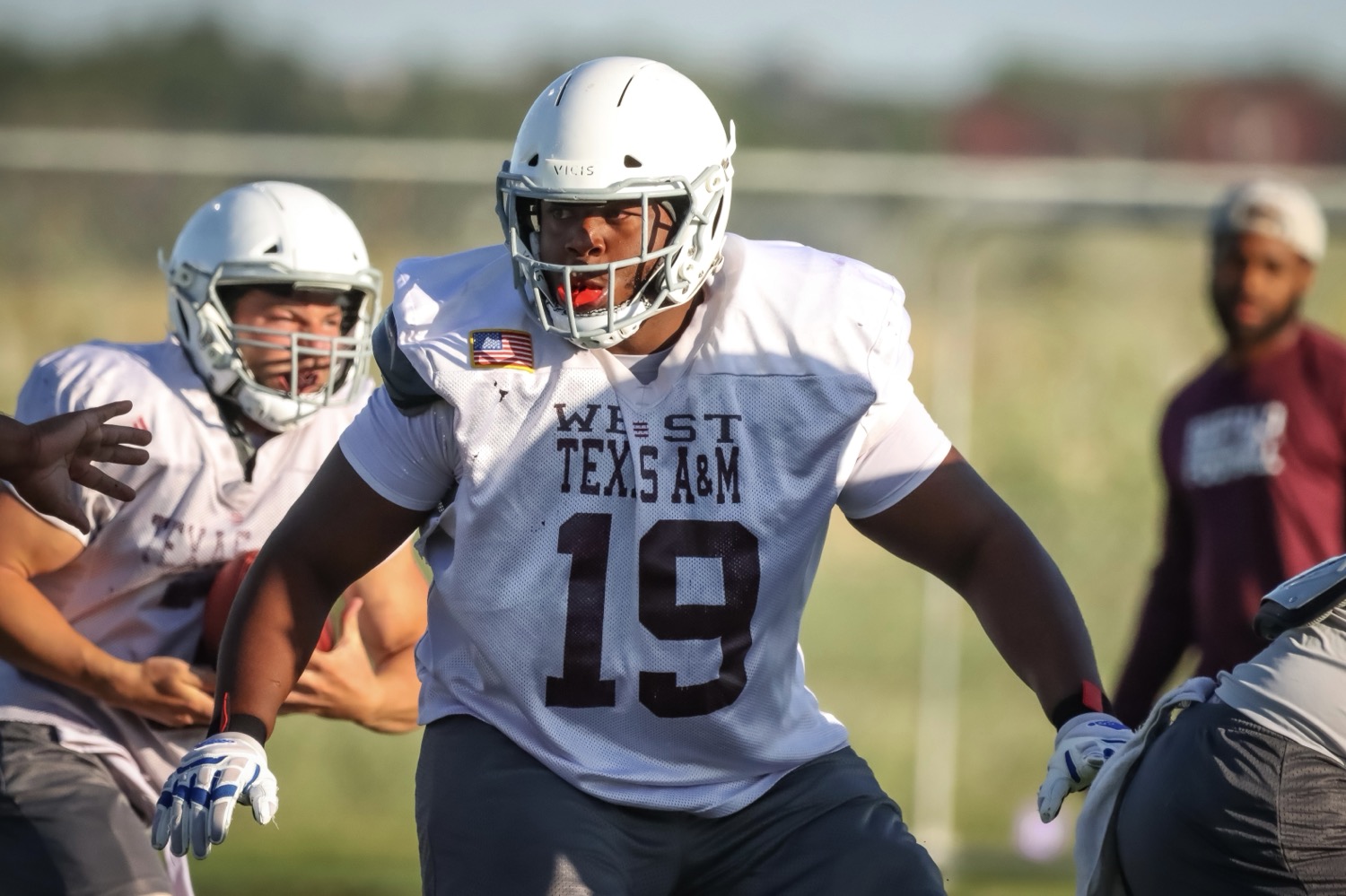 When West Texas A&M opens its highly anticipated 2021 season at 7 p.m., Thursday night at home against Texas College fans will immediately take notice of the newest Buff on the offensive line.

Lott was one of the biggest transfers, in more ways than one, head coach Hunter Hughes acquired over the summer.

“I remember recruiting him out of high school,” Hughes said. “He was a little overweight then so I thought we had a chance. But we knew he had better things ahead of him. I remember when he came off an official visit at the airport he had on Kansas gear I knew he made his choice. I congratulated him.

Lott, who has three years of eligibility still left because of the COVID-19 year, played successfully the past two seasons for the Jayhawks.

In 2020, the hard-nosed lineman with great strength started in seven games at Kansas.

But after some thought and the dismissal of Les Miles as head coach, Lott entered the NCAA transfer portal, and thought his best decision was to come play for Hughes and the Buffs.

“First off I want to say thank you to the University of Kansas for giving me the opportunity,” said Lott, who played in a total of 14 games during his two years at Kansas.

“I just felt it was better to seek a different path. I had to take some summer classes and go through a little bit of a transfer process, but I’m glad to be back close to family and friends. It’s great to be back, and I want to be a good influence on everybody.” 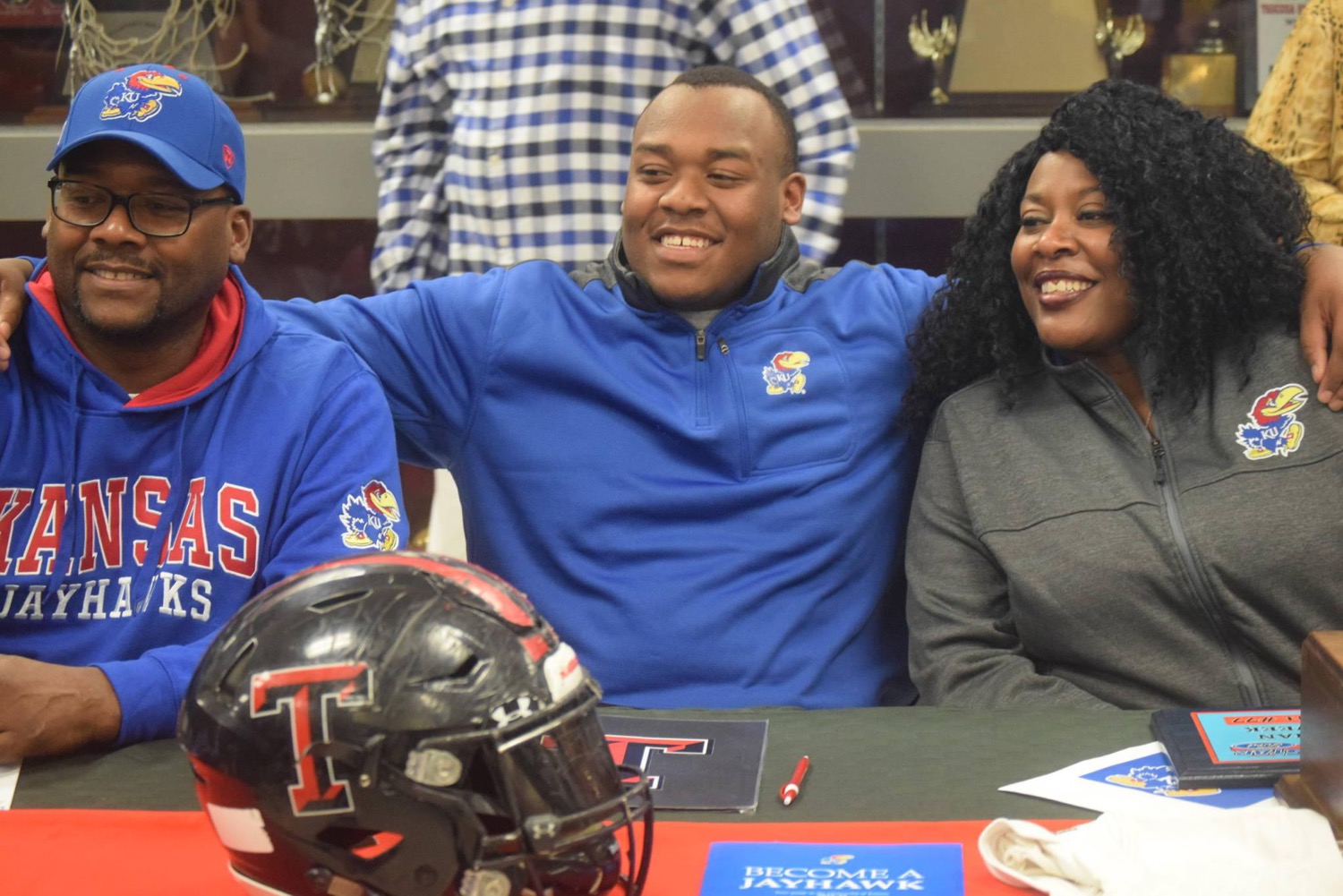 Tascosa graduate Jacobi Lott originally signed his National Letter of Intent in 2018 with the University of Kansas. [Provided photo]

Lott has made his presence known in a hurry on the offensive line at WT. He’s secured the starting left guard spot next to Stratford graduate Parker Hanna at left tackle.

“It hasn’t been a hard transition,” Lott said. “I just keep my head down and work. There are always going to be different things come at you in life. But football is football. You just want to go out and prove what you’re worth to this team.

“I love here at WT. I love being home, I love the Texas weather. It’s been fun, and this is an amazing opportunity. I love playing for coach Hughes. He’s built a very good program, and I believe it’s a championship contender.”

Hughes has loved everything about Lott since his arrival in Canyon. From the person he is, his humor, to his dominating demeanor on the field.

“He’s come in and done a great job,” Hughes said. “He’s embraced our culture, he’s embraced what we do. He never talked about all they had at the Division I level. He’s a lot of fun to be around. I’ll be having a bad day or in a bad mood at practice and he’ll come up and smile or say something and make me laugh with his big grin. He has a great personality. He’s fit in well with who we are.”

Tascosa head coach Ken Plunk keeps up with Lott and his progression and couldn’t be more proud of what he sees from his former star.

“I’m super happy with what Jacobi is doing,” Plunk said. “Anytime our athletes pursue academic or athletic careers we’re excited. He was great at Kansas, but now he’s close to home and we’ll be able to watch. That’s exciting.”

Lott, a 2018 graduate, is part of a recent trend of Tascosa athletes that’s helped put the Texas Panhandle on the college football recruiting scene.

“It shows that the Texas Panhandle has a lot of talent,” Lott said. “The area can be overlooked. But you see what King has done, Brandon, myself, it shows that we all have what it takes. Major and Avion have great potential. It’s been fun to see.”

“I still love to follow the Rebels. I love coach (Moises) Sandoval (offensive line coach), and coach (Ken) Plunk. They’ve got that program doing great things and I was lucky to be a part of that. It’s been awesome to see Tascosa play with the Metroplex.”