Buffs rally in second half to get past Midwestern 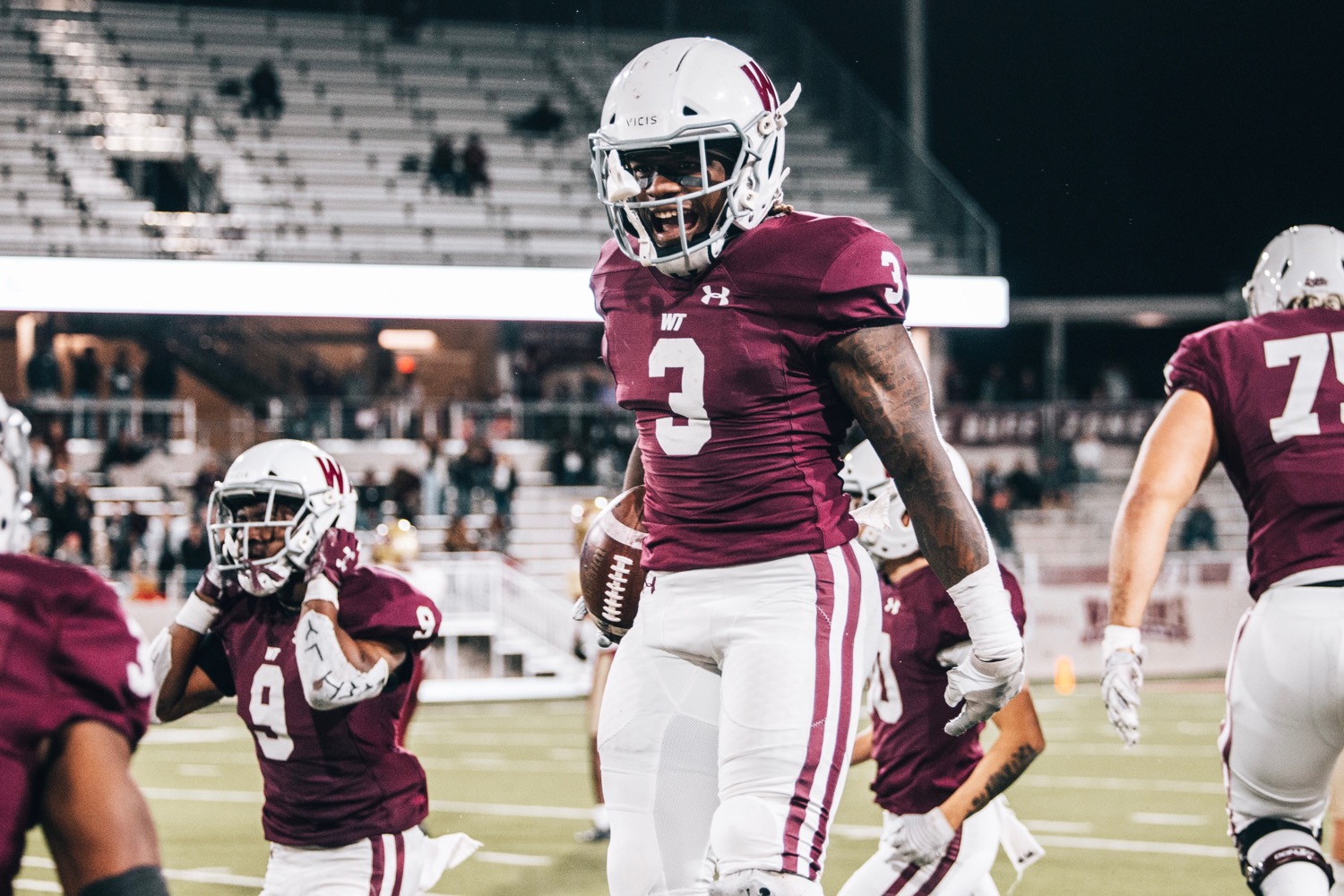 It was literally two different ball games in one for the West Texas A&M Buffs on Saturday night at Buffaloes Stadium.

Fortunately for the Buffs, the second one was better.

After a first half in which nothing went right thanks in part to some self-sabotage, WT got those breaks in the second half against Lone Star Conference leader Midwestern State. Taking advantage of two Midwestern fumbles, including one which led to an epic 99-yard scoring drive, the Buffs ground out a 15-12 victory to end their LSC season on a high note.

Should the cards fall right next week involving the other LSC teams, the Buffs (6-4, 5-2 LSC) could end up sharing a conference title. To get in that position, they had to dig down and take care of business this week.

“We talked all week about character and I asked the guys the question, ‘How do you want to be remembered?’ “ WT coach Hunter Hughes said. “I told them in our meeting today about unity. We had to play as a team in the defensive unit and offensive unit and the special teams. I thought we had some energy, especially in the second half.”

Trailing 12-0 to open the second half, the Buffs didn’t appear to be any more inspired when they took the kickoff, as they had a three-and-out. But Midwestern’s Tre Owens muffed the ensuing punt and WT’s Tobias Harris recovered it at the Midwestern 44-yard line to give the Buffs a big break.

Four plays later Isaiah Smallwood scored on a 22-yard run to cut the lead to 12-7, and the Buffs had life.

“We needed a spark and we got the spark from the turnover on the punt,” Hughes said. “I think we were a little bit deflated after the three-and-out. We really did finish with a touchdown there.”

Midwestern (6-3, 5-1) marched to a first-and-goal at the WT 5 and appeared ready to grab momentum of the game back. But on second down, quarterback Dillon Sterling-Cole was hit at the 1-yard line and fumbled, and WT’s J.T. Cavender recovered to completely change the complexion of the game.

“It was huge,” said Cavender. a freshman who had a huge game with 20 tackles, including 15 solo. “I ended up stopping (Sterling-Cole) but I didn’t get the ball out, it was C.T. (Christopher Thomas) who punched it out. It happened just to hop in my hands. It was a great moment.”

And it resulted in a 15-point swing. The Buffs embarked on a 12-play, 99-yard scoring drive, concluding with quarterback Nick Gerber’s 6-yard scoring run with 59 seconds left in the third quarter for a 15-12 lead which WT’s defense made hold up for the rest of the game.

That signified how the Buffs came to life offensively in the second half. They amassed 247 of their 325 yards of offense after intermission.

Jarrod Compton carried the biggest load with a game-high 160 yards on 30 carries.

“Whenever (the offensive linemen) make me look pretty I feel like I’m doing them a disservice if I don’t capitalize,” Compton said. “I just did what I needed to do. It was player-led. The offense kind of just separated and I told them we were only down two scores and there’s no reason to panic and we just came out firing in the second half.”

For most of the fourth quarter, it was about the defenses. The Buffs had a drive take up almost six minutes and got the ball to the Midwestern 8, but Gerber was intercepted by Lance Hardman at the 3 with 2:15 left in the game, thwarting the drive and deflating all of WT’s momentum.

The Mustangs looked like they were about to turn the same trick the Buffs turned on them with a drive to potentially win or tie the game which got to the WT 36. But on fourth down, Harris intercepted a deflected pass to seal the win and guarantee the Buffs a winning season.

The first half was mostly about field position and who could take advantage of it. A pair of miscues in the punting game by WT made all the difference in the first half, as they directly or indirectly resulted in Midwestern’s first nine points of the game en route to taking a 12-0 halftime lead.

After a scoreless first quarter, WT’s Brayden Welch had the first of two highly unfortunate punts early in the second quarter, as he had a 4-yard punt which gave the Mustangs the ball at the WT 43-yard line. Three plays later, Sterling-Cole hit Kylan Harrison on a 6-yard scoring pass for the only touchdown of the half and a 7-0 Midwestern lead.

Later in the quarter, Midwestern’s Justin Jones broke through and blocked a Welch punt, sending the ball out of the side of the end zone for a safety and a 9-0 lead.