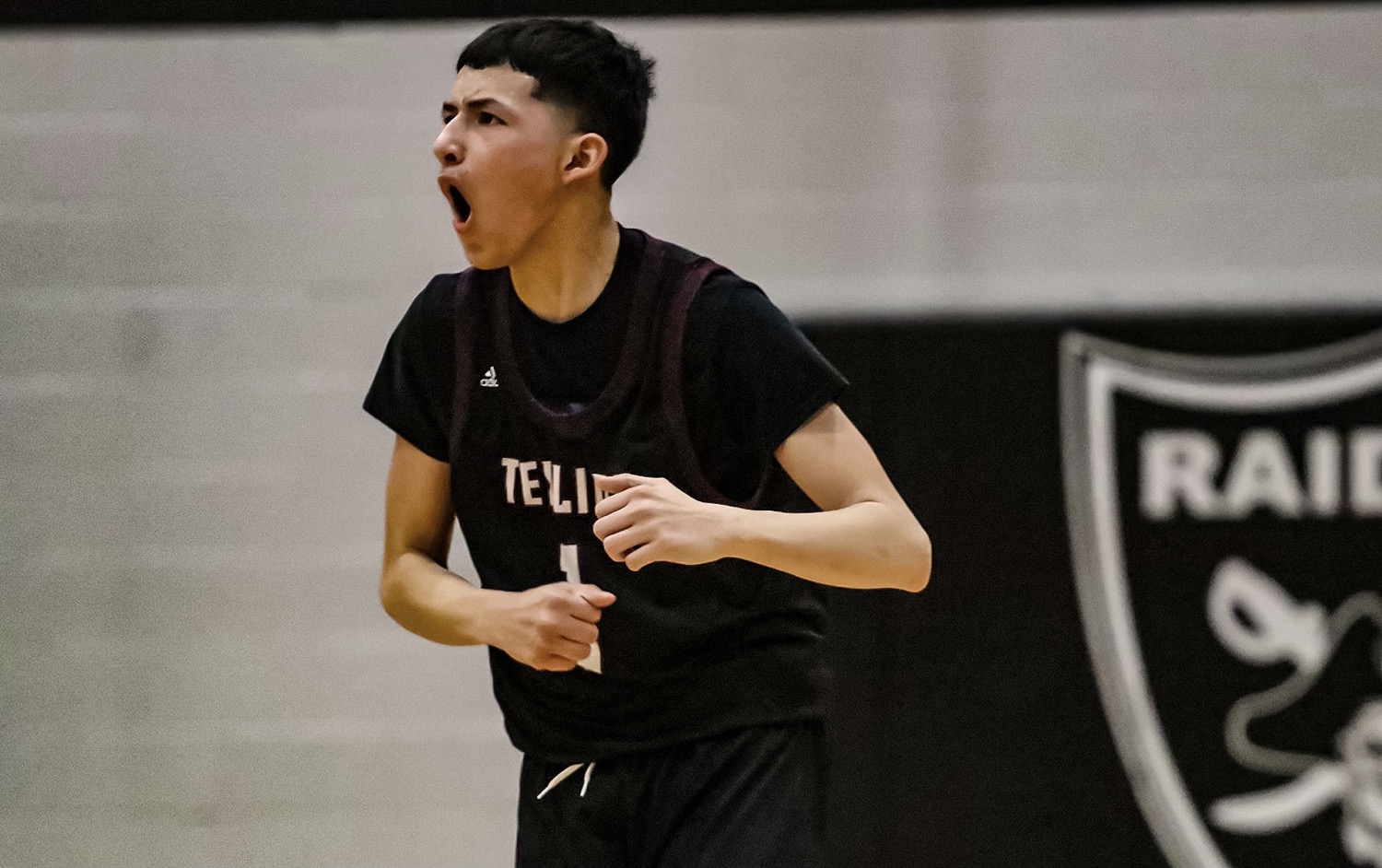 Elias Espino celebrates after knocking down a 3-pointer against Springlake-Earth during a Class 1A regional quarterfinal at Randall High School on Friday night. [Ben Jenkins/ Press Pass Sports]

For one half, Amarillo High was caught in a tough Class 5A region quarterfinal game against El Paso Andress. One half later, it didn’t seem so tough at all.

Amarillo High held Andress to five points in the second half and broke open a tight game to roll to a 64-34 victory at Andrews on Friday. The Sandies (22-2) will play the winner of Saturday’s game between Mansfield Timberview and Fort Worth Wyatt in the regional semifinals at a time and place to be determined next week.

AHS led only 31-29 at halftime as Andress (17-5) gave the Sandies all they could handle. But it was a different story in the third quarter, as Amarillo High outscored Andress 20-3 and took control of the game for good.

Canyon falls in heartbreaker to Estacado

Canyon got off to a strong start and carried the lead into the fourth quarter, but the Eagles went cold in the final period against Lubbock Estacado, scoring only four points as Estacado came back for a 50-46 victory and end Canyon’s season in a Class 4A regional quarterfinal game at Frenship.

The Eagles finished the season 19-8.

The Eagles were outscored 12-4 in the fourth quarter, sealing their fate.

Joe Shaw led Canyon with 19 points and Kemper Jones had 14. Kiante Williams had a game-high 20 points for Estacado and Alijah Willard scored 11

Abernathy opened up a comfortable lead on Childress in the second half and was able to coast from there, beating the Bobcats 58-47 in a Class 3A regional quarterfinal game at the Caprock Activity Center on Friday night.

Childress finished the season 16-7, falling to district rival Abernathy in all three meetings this year.

Abernathy (21-6) was consistent in the first half, scoring 16 points in each of the first two quarters. Childress scored 12 apiece and trailed 32-24 at halftime.

While the Antelopes were never able to completely pull away in the second half, the Bobcats were unable to find the range offensively in the third quarter, scoring only six points and trailing 43-30 at the end of the period. Abernathy went up by 16 in the first minute of the fourth quarter and while Childress pulled to within six in the final two minutes, it got no closer.

Devron Sims led Childress with 11 points and Lamont Nickleberry had 10. Luke Houston had a game-high 21 points, including 14 in the second half and Sean Rodriguez scored 12.

It was a big night for District 2-2A as three out of the eight teams in the boys Region playoffs resided from the very competitive district.

Two of the teams did battle with Panhandle and Wheeler meeting for the third time this year in the Class 2A regional quarterfinals in Pampa on Friday.

As it went the first two times, the Panthers came away with the win to advance to the regional semifinals thanks to a 41-35 victory against the Mustangs.

It was a tough night for points as Panhandle led 18-15 at half. The Panthers stretched the lead to eight by the end of the third, and held the Mustangs off in the fourth. Dylan Segura poured in 11 for Panhandle, follwed by Landyn Hack and Zion Mercer’s eight points.

Panhandle (20-5 overall) moves on to face Wink (26-0) in the regional seminals at a time and place to be determined. Wheeler ends its season at 15-9.

Clarendon, the districts third representative, is moving on to the regional semifinals after downing Floydada, 62-52 Friday night in a regional quarterfinal in Canyon.

The No. 2-ranked Broncos are now 22-4, and advance to face to play Christoval (21-4) in a regional semifinal at a time and place to be determined.

Jmaury Davis and Lamarcus Penigar were the difference for Clarendon. The outside-inside duo combined for 43 of the Broncos 62 points with Davis going for 22 and Penigar scoring 21.

Nazareth and Texline move on

Texline looked outstanding in Friday’s regional quarterfinal getting all over Springlake-Earth in an 84-51 win at Randall.

The Wolverines simply had no answer inside for 6-foot-3 physical post Noel Lozano. Lozano bullied Earth on the block scoring 15 of his game-high 26 points in the first half. While Lozano did his thing on the inside, Elias Espino torched Earth from the perimeter knocking down five 3-pointers on his way to 21 points.

The No. 4-ranked Tornadoes are headed to the regional semifinals to square off with Jayton (22-3) at a time and place to be determined.

Earth guard Evan DeLeon scored 26 points in the loss, as the Wolverines ends its their season at 14-4.

While Texline cruised, No. 6-ranked Nazareth had to fend off District 3-1A foe Wildorado 52-39 in a regional semifinal at Amarillo High on Friday.

The Mustangs trailed only 24-21 at the half. In the second half the Swifts amped it up taking a nine point lead after three, before pulling away late. Kaden Cleavinger put up 15 points followed by Trent Gerber’s 11. Wildorado, which finished a historic season at 20-8, was led by Logan Mason’s 12.

Nazareth advances for a big time showdown with No. 8 Paducah (17-1) in a regional semifinal at 7 p.m. at Frenship.