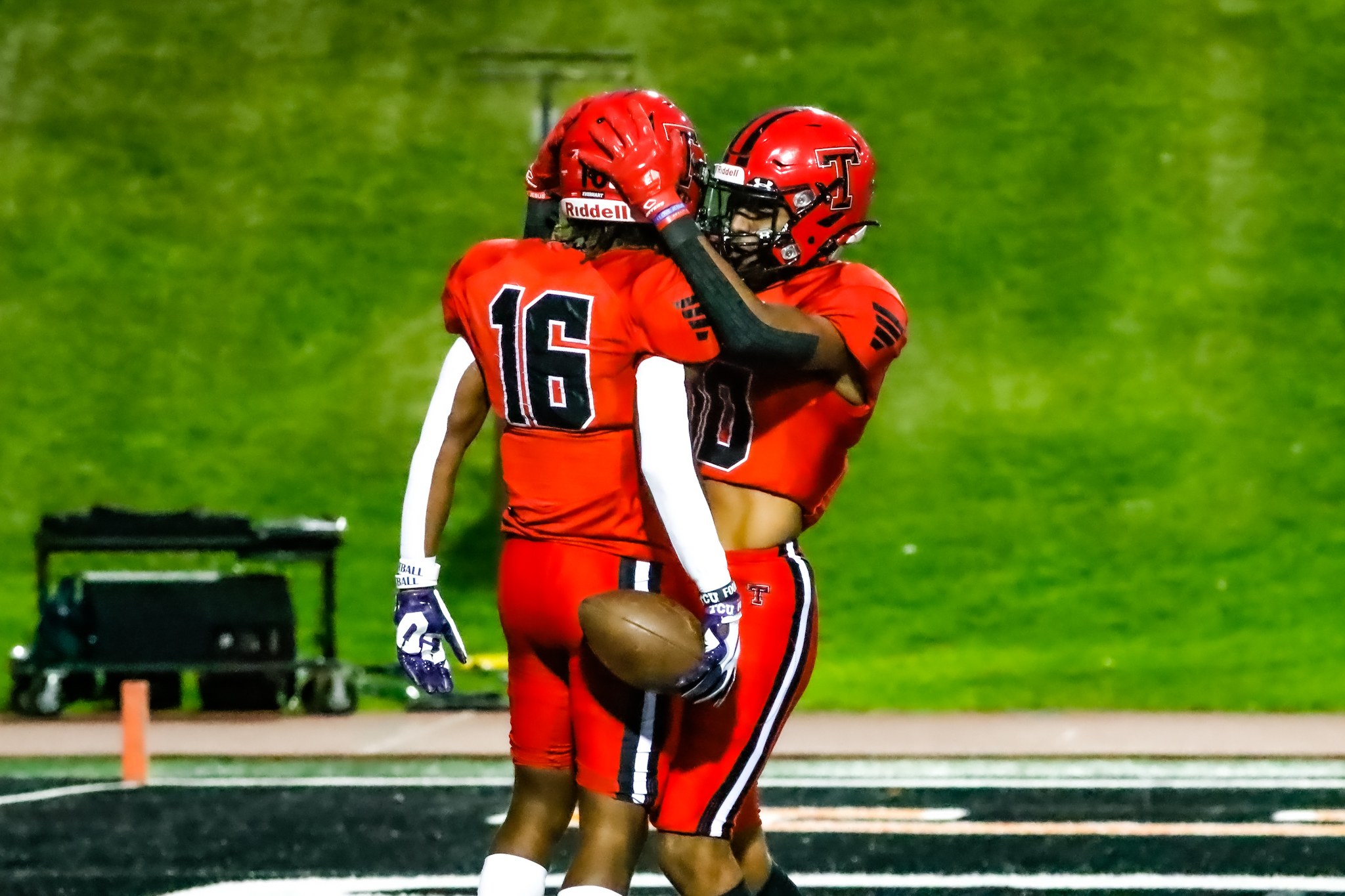 In terms of big plays, thrills and emotion, Friday night’s crosstown showdown between Amarillo High and Tascosa in front of an estimated 12,000 fans at Dick Bivins Stadium for the District 2-5A Division I outright lead was what locals have come to expect from the rivalry.

But considering the current state of each team, it was no surprise who got the best of it in the end.

On coach Ken Plunk’s 50th birthday, Tascosa celebrated with something better than cake, using two signature long scoring plays in the first half and a grinding running game to take a comfortable lead. The Rebels made sure Plunk could blow out his candles a happy man, as they beat Amarillo High 34-22 to claim sole possession of the district lead and move closer to a playoff spot.

The game was occasionally sloppy but always spirited, which is something Plunk has come to expect in his 13 meetings with the Sandies. He’s familiar enough with the rivalry to be happy with any win.

“We played well but we still made more mistakes than we had been,” said Plunk, whose team failed to hit the 40-point mark for the first time this season. “I think that’s probably true for both teams in this game because of the emotional aspect of it. You probably do some things in this game that you normally wouldn’t do.”

That seemed especially true in the first half as both teams had some troubles kicking the ball, each missing an extra point. However, a pair of blocked field goals turned into 12 points for the Rebels (6-1, 3-0 in district) in claiming the momentum and taking a 27-6 halftime lead.

A shootout looked likely early on, as Amarillo High (5-2, 2-1) took the opening kickoff and marched down the field. The drive culminated with a 19-yard scoring pass from Brock Wade to Jameson Garcia to make it 6-0.

But it got no better than that in the first half for the Sandies, as the Rebels reeled off 27 unanswered points to close the half. Quarterback BT Daniel closed a prototypical Tascosa drive to answer Amarillo High’s score, keeping it on a 2-yard run for a 7-6 lead.

Normally reliable Luke Laminack was called on to attempt a 41-yard field goal for the Sandies early in the second quarter, but it was blocked by Tayden Barnes, giving the Rebels possession at their own 24-yard line. The next play Major Everhart, who committed to TCU the day before, took a pitch, cut up the middle, made a couple of moves and sprinted 76 yards for a touchdown to make it 13-6.

“It gives us a boost in the game,” said Everhart, who had his usual productive yards-per-carry night with nine carries for 131 yards. “It changes the momentum of the game very well so we can come out on offense and excel like we wanted to. I definitely wanted to come out here and get the ‘W’ like we did and we played like we practiced all week and it was definitely icing on the cake.”

But even Everhart didn’t have the impact of the game-changer which occurred on the next possession. After another AHS drive stalled, Laminack was called on to try a 51-yarder, which Barnes also blocked, and this time L’Travion Brown picked up the loose ball and returned it 72 yards for a score to make it 19-6.

That was a signal of what Amarillo High was in for in dealing with Tascosa’s speed.

After the Rebels held Amarillo High on downs and took over at their own 45, they ended the half on Daniel’s 4-yard run with 18 seconds left to make it 27-6. 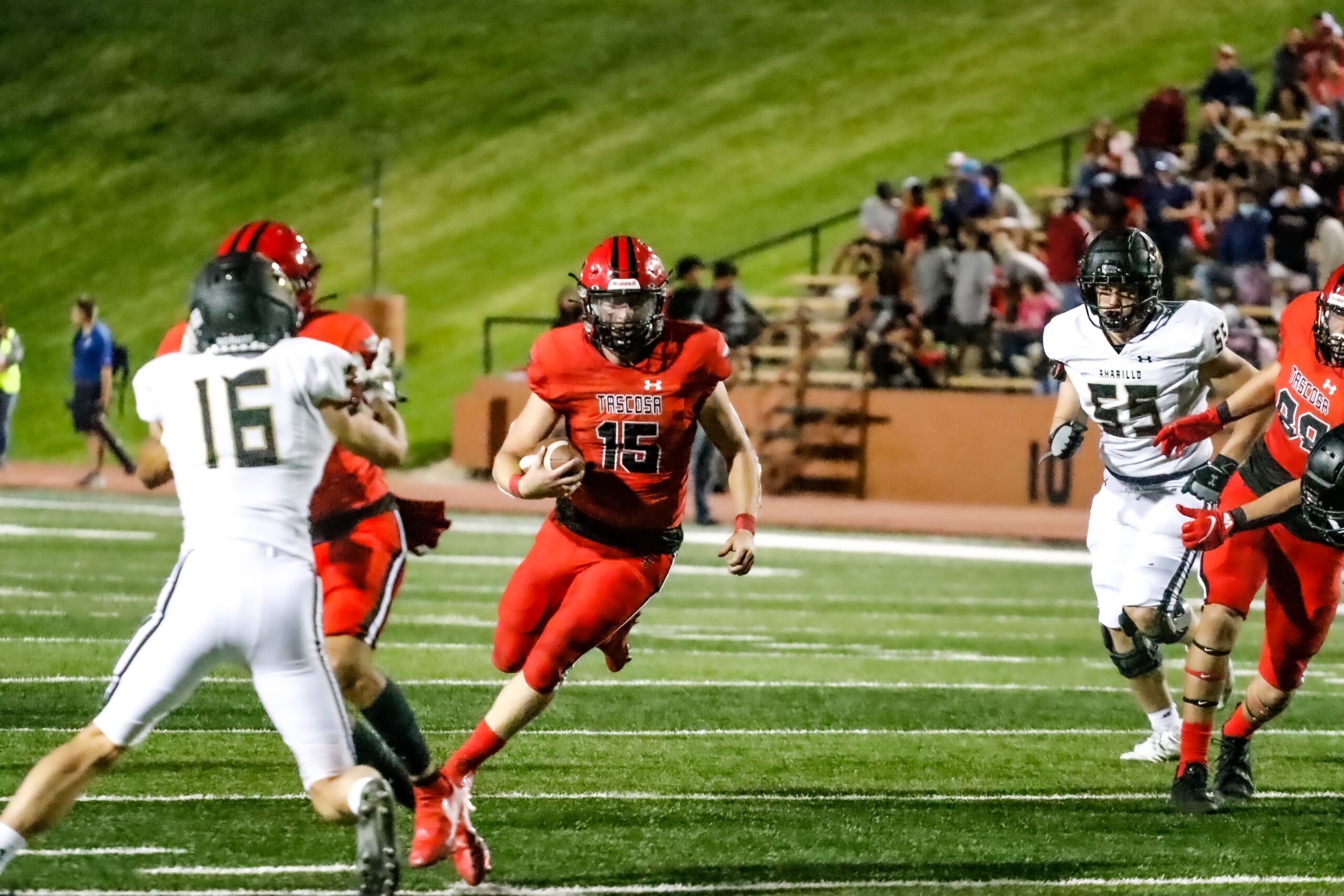 Daniel has continued to be the most consistent element of Tascosa’s offense as the operator of the triple option. He ran for a game-high 164 yards and three touchdowns on 29 carries and his 1-yard scoring run with 4:33 left in the game put the win away for the Rebels.

“I’m not really focused on (statistics),” Daniel said. “I’m just happy my linemen were able to open up some gaps for us. It was just whatever the defense gave us and it happened to be my night just taking it up the middle.

“It feels pretty big but it’s going to be pointless if we can’t carry it on in the playoffs. We’ve got to take it one game at a time but that’s our goal.”

The final margin was the closest the Sandies were able to get after halftime. Wade finished with two touchdown passes and Amarillo High actually had more first downs than the Rebels, 19-18, and outgained them by a 413-354 margin.

But the Sandies knew that yards in and of themselves don’t win games.

“I’m excited that we came back in the second half,” Dunnam said. “I thought we played really hard there and made the game respectable. Honestly I still feel like we left a little meat on the bone out there. I think we could have won the ball game.”

City bragging rights, though, stayed with Tascosa for the second straight year, not to mention the district lead. And it meant that Plunk could enjoy one of his most memorable birthdays in his half century on this planet.

Not that he made a big deal out of that after the victory.

“I kind kept it secret,” Plunk said of his milestone birthday. “Some way or another the kids figured out it was my birthday. I don’t know how because I really don’t do social media or anything like that. It was great gift and it’s always a gift to coach this football team.”