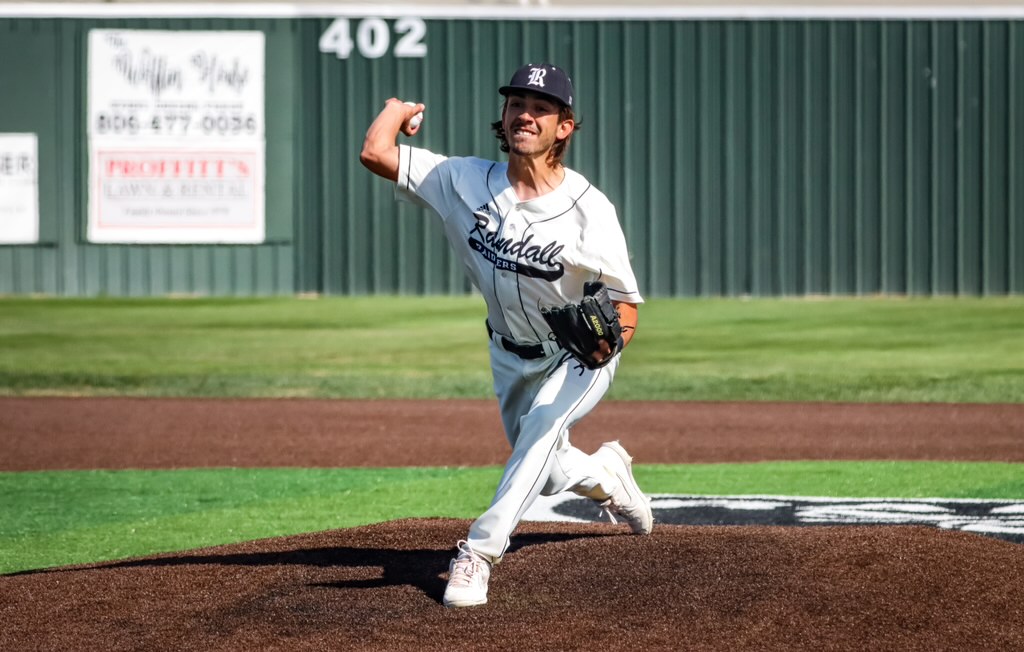 Randall’s Alex Massey delivers a pitch against Caprock during a District 3-5A game on Tuesday. [Ben Jenkins/ Press Pass Sports]

Tascosa started and finished well in Tuesday’s District 3-5A game at Sandie Field, but in between, it was all Amarillo High.

The Sandies scored eight unanswered runs starting in the bottom of the third to roll to an 8-2 victory over Tascosa in the first meeting of the week between the two teams. When the teams meet again Friday at Tascosa, Amarillo High (17-8, 10-4 in district) will clinch the No. 2 playoff seed in the district by winning the regular season finale.

Tascosa (11-15-1, 6-8) took a 1-0 lead in the top of the third when Javen Patrick’s fielder’s choice grounder drove home a run. But the Sandies took control of the game in the bottom of the third when Hadley Cox drove in a run with a triple and scored on Ryan Goodrich’s single for a 2-1 lead.

Goodrich and Cannon Davis both had two hits and drove in two runs each for Amarillo High. Clayton Norrel got the victory on the mound, going six innings and allowing only one hit, a double by Brady Carroll.

Having already clinched a district championship, the Randall Raiders made sure to continue their string of stellar pitching performances against Caprock, using the whole staff for a combined no-hitter in a 7-0 victory at home.

The struggles of Palo Duro continued on the road at Plainview, as the Dons managed only three hits in an 8-1 loss.

Palo Duro (4-19, 1-13) tied the game 1-1 in the top of the third on a sacrifice fly by Leslie Shaw which scored Charlie Love, but that was all the Dons managed. Plainview (14-15-1, 9-5) scored twice in the bottom of the third without benefit of a hit to take a 3-1 lead and closed the game with seven unanswered runs.

The Dons didn’t help themselves in the field and they committed five errors and gave up four unearned runs.

The Canyon Eagles made sure their final home game was an exciting one, as they scored in the bottom of the seventh for a 2-1 walk-off victory over Hereford three days after they clinched the district title.

Both teams scored a run in the third inning and it stayed 1-1 until the bottom of the seventh. With one out, Canyon’s Diego Hernandez singled to center to drive home Hunter Wilson with the game-winning run.

Camron White had a stellar game on the mound for the Eagles (16-7, 9-1), giving up only two hits and an unearned run for the complete-game victory. Canyon’s Sam Johnson was the only player on either team with multiple hits, as he went 3-for-3.

The loss spoiled a solid mound effort by DJ Ramirez of Hereford (13-13, 5-5), who gave up only one earned run.

The trend continued for Bushland, as the Falcons scored 10 runs in the top of the third to ensure their ninth straight 10-run mercy rule win to open district in a 17-0 win in five innings at Dalhart.

Bushland (18-2, 9-0) jumped out to a 5-0 lead in the top of the first. Kade Gavina led off the game with a home run and Clayton Fisher concluded the inning with a grand slam for a 5-0 lead.

In the third, Bushland’s first six batters reached base, and five straight hits with two outs stretched the lead to 16-0, well past the threshold of a run-rule decision.

The top two hitters in Bushland’s lineup, Gavina and Straton Mallory, both had four hits, as five Bushland batters had at least two hits to lead an 18-hit attack. Josh Bass threw a one-hitter.

Another metro team, River Road, also won big, as the Wildcats routed Friona 15-5 and clinched the No. 2 playoff seed from the district. The Wildcats are now 13-9 and 7-2.