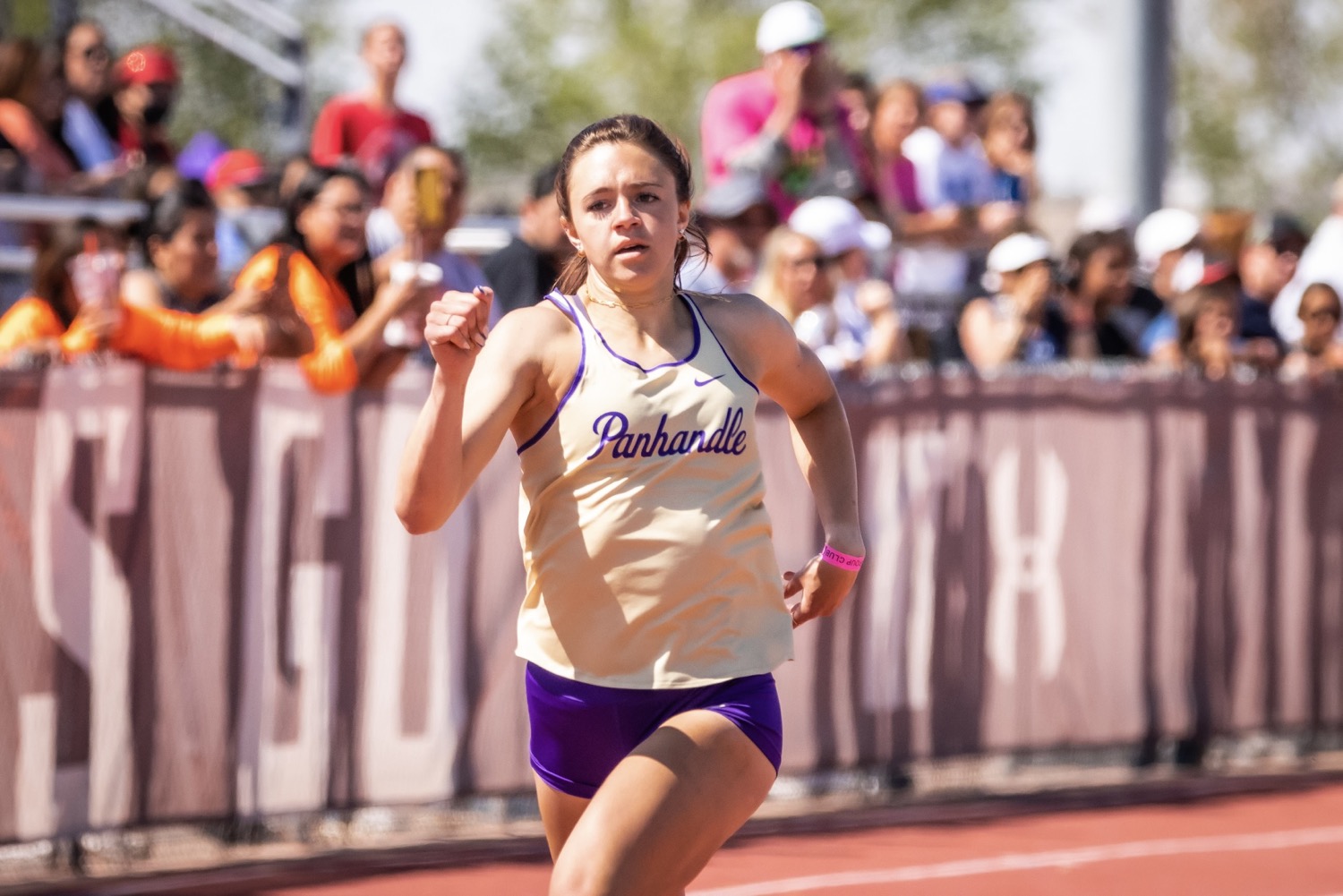 A packed house at West Texas A&M on top of beautiful weather was a recipe for Texas Panhandle to put on stellar performances at the Region I-2A track and field meet Saturday afternoon.

The Panhandle boys and girls teams flexed their muscles making it a clean sweep as regional champions.

The Panthers held off Post despite the Antelopes winning all three relays. Panhandle totaled 90 points to Post’s 87.33.

The Ettes stood tall in the running events taking gold in all three relays piling up 104 points, which was 26 points better than second place Gruver (78).

No question the star of the meet on the girls side was Panhandle junior Macklynn Land. As she’s done all season, Land showed how dominant she can be punching her ticket to state in three events.

“It’s great to get another chance to go back to state,” said Land, who won the 400 meter run at the Class 2A state meet in 2019 as a freshman. “It was a great day for my teammates and I. We’re so excited to keep going and compete down at state.”

Land and Panhandle weren’t the only Amarillo-area girls to make noise on Friday and Saturday. 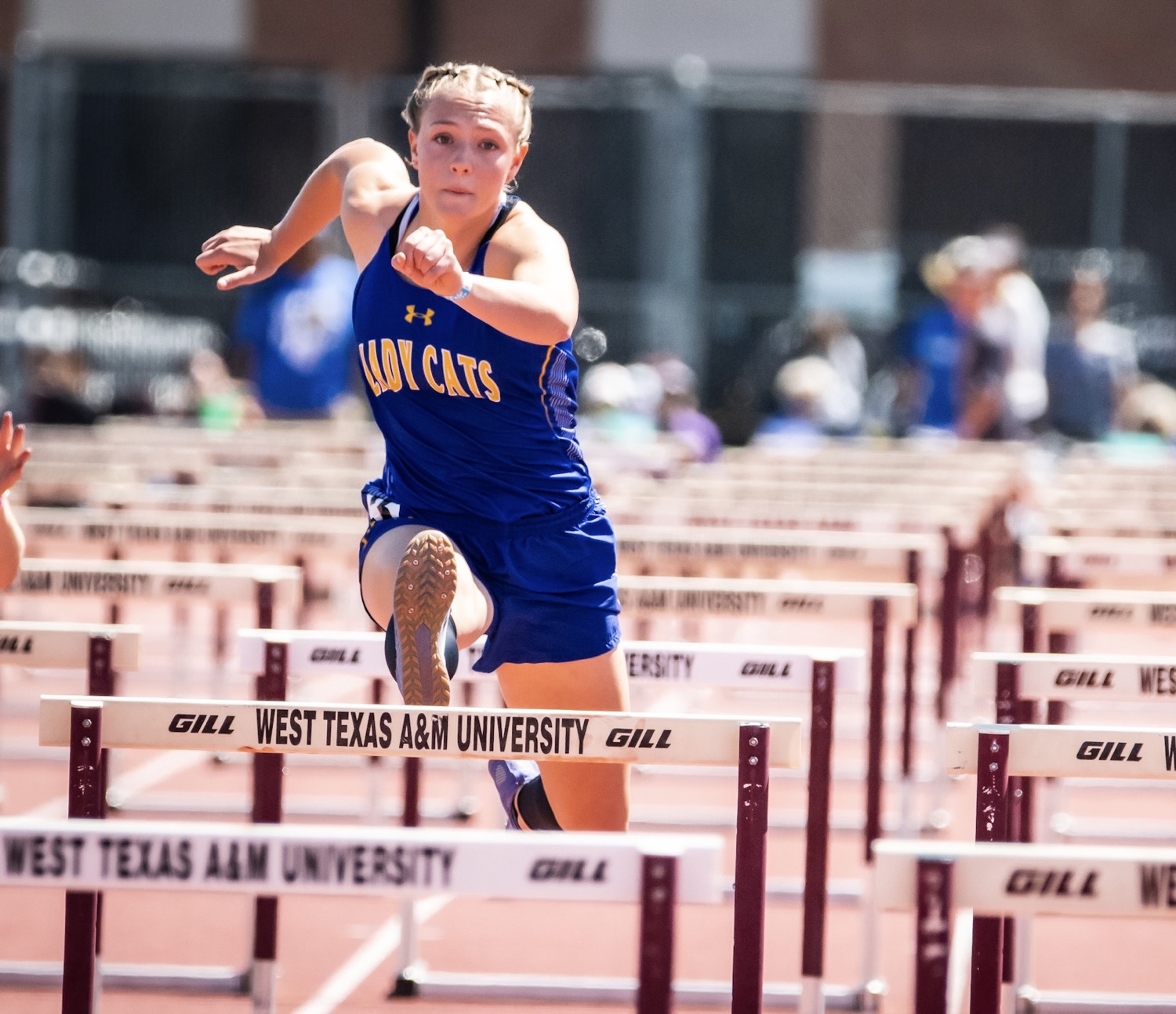 Sunray’s Ella Strickland broke the Class 2A record and school-record leaping an eye-opening 12-7 to get a gold medal in the pole vault Friday. The junior then followed that up with another gold medal by earning a hard fought victory in the 100 hurdles holding off Stratford’s Rese Schoonover clocking a 15.29.

“i didn’t think I was having the best day Friday,” Strickland said. “Somehow I found the power to strive through it at the end. To hit 12-7 was definitely the highest point in my life. Then in the hurdles, I had been practicing hard all week on my technique and it paid off.” 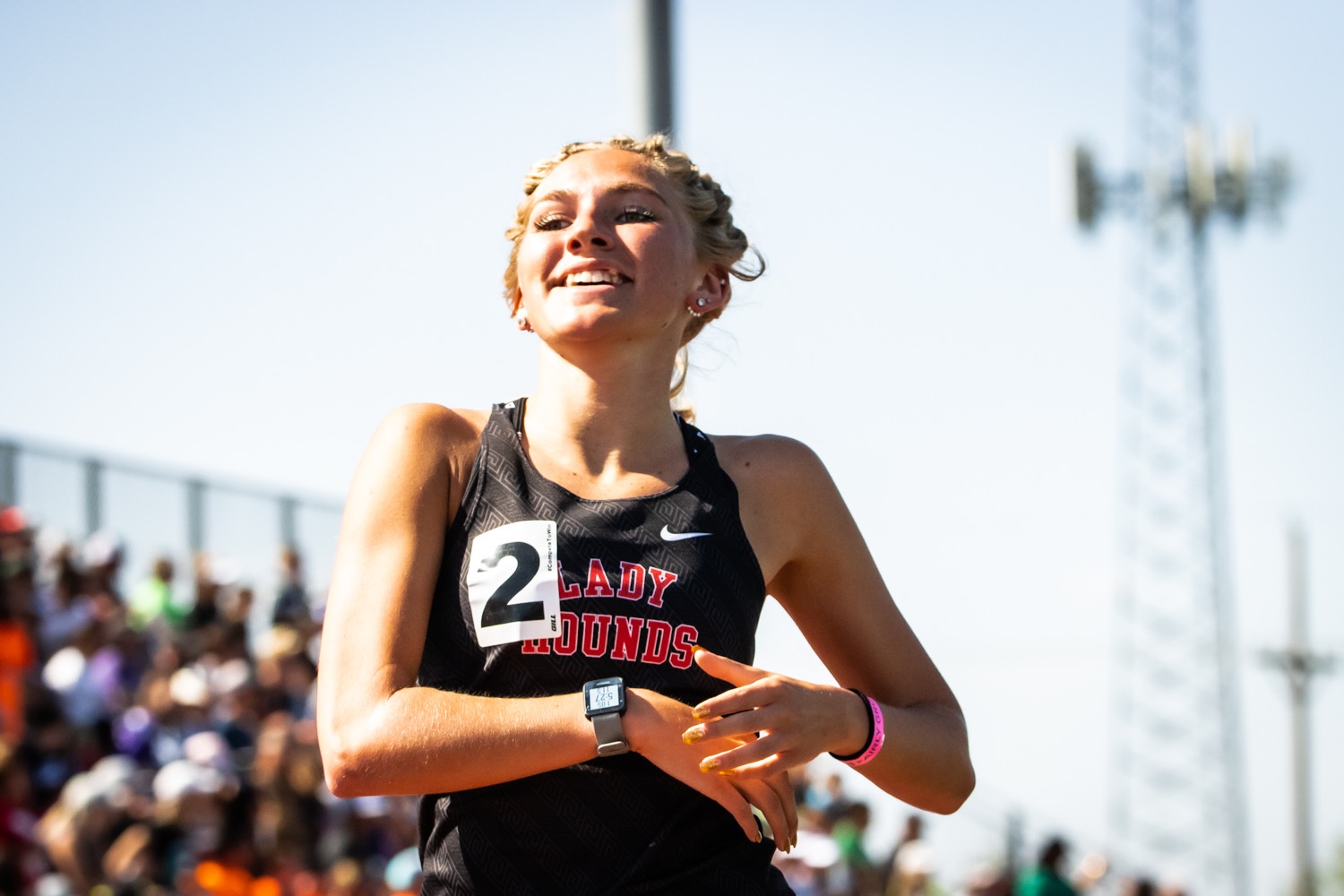 Gruver had a pair of athletes also make a splash to earn a trip to state. Senior Delaney Weaver owned the long distance races setting a new personal-best of 11:55.06 to win the 3200 meter race Friday. On Saturday, Weaver was at it again in the 1600 meter run leaving the competition behind for another personal-record of 5:28.87.

“I ran with the mentality that I had to run my own race,” Weaver said. “I broke my goal of breaking 12 minutes, so that was exciting. I was nervous today (Saturday), but once I got out there I knew I could go out there and do what I could do.”

Weaver’s Bailey Maupin claimed gold by clearing 5-5 in the high jump. The Division I basketball prospect then added two silvers to her day as a part of the 800 and 1600 meter relay. 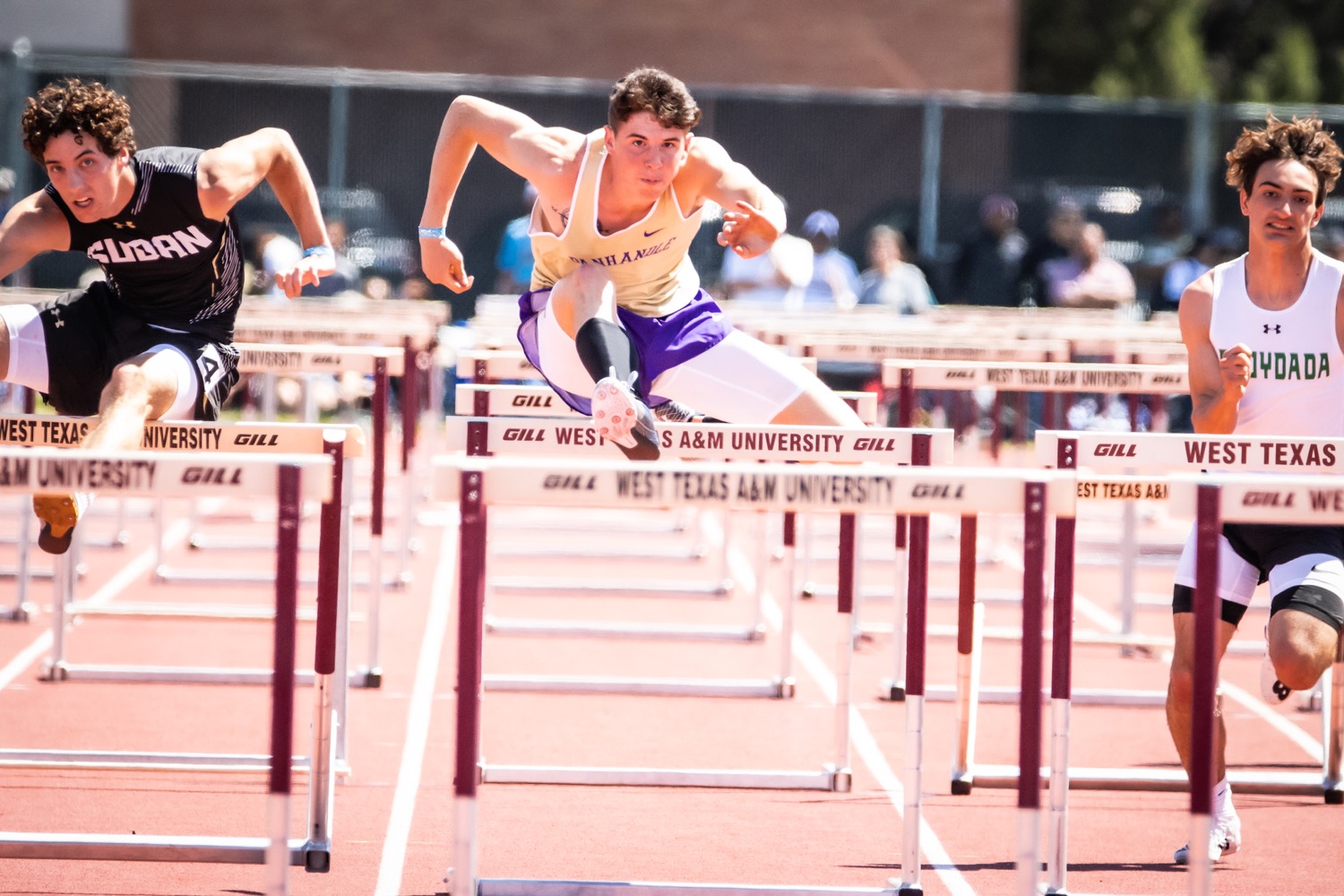 On the boys side, Panhandle’s sprint relay team of Zion Mercer, Zach Wood, Luke Battle and Landyn Hack finished right behind Post for a silver medal clocking a 42.82.

Seniors Alex Thompson and Clint Maurer helped the Panthers stack up the points with double gold medal performances. Thompson swept the hurdle events running a 14.70 in the 110 hurdles, then narrowly escaping victory in the 300 hurdles with a 38.99.

On Friday Maurer took his first gold in the leaping a 14-3 in the pole vault, and on Saturday turned around to run a personal-best 1:59.81 for a victory in the 800. 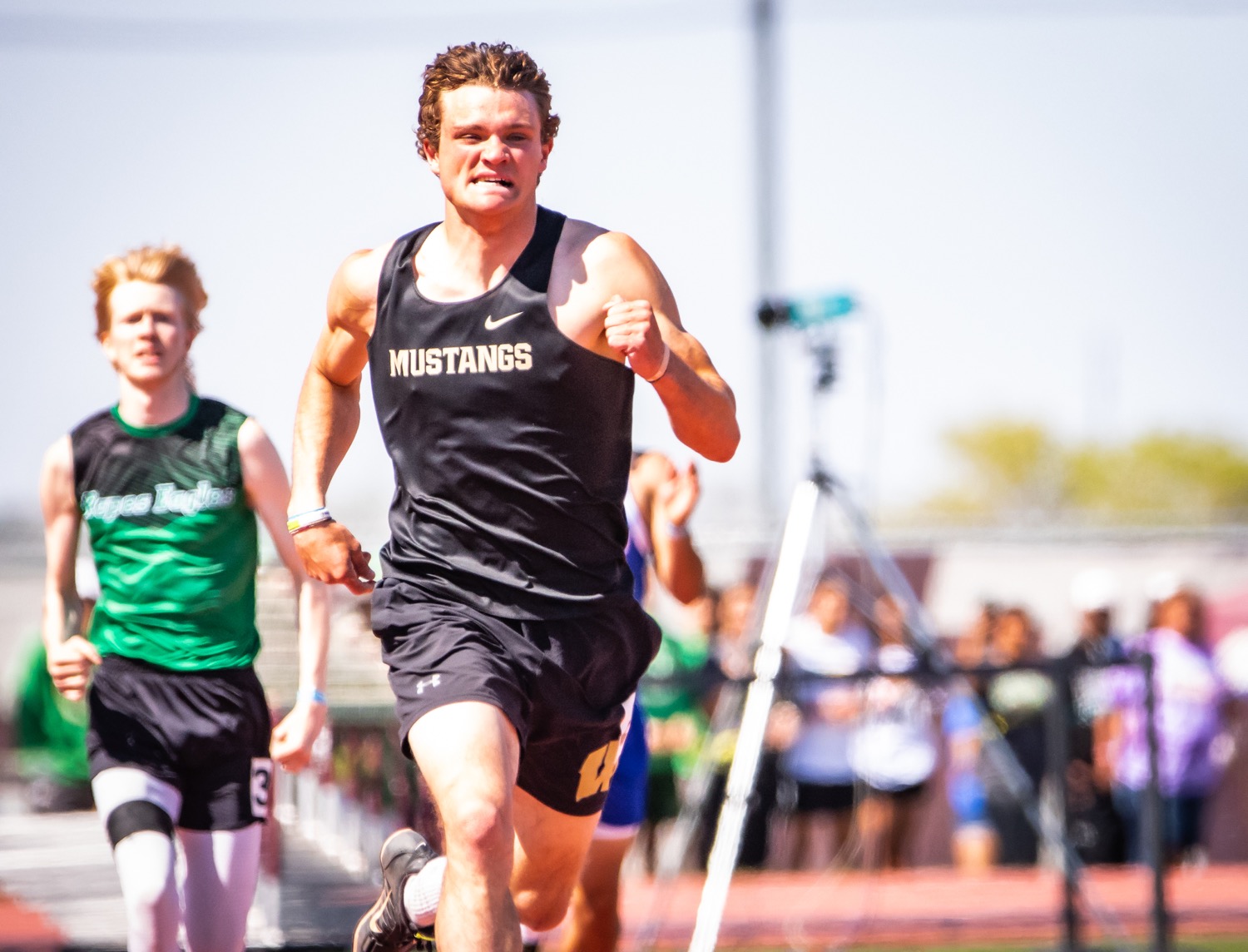 As good as Panhandle was, Wheeler’s Hesston Marshall was equally impressive. As he’s done all season, the senior dominated regionals to earn a trip to state in four separate events. Marshall won a silver in the long jump to start Friday. Wheeler’s main Mustang took over Saturday taking off in the 100 meter dash for his first gold at 10.98, nabbed his second gold medal in the 400 meter run (49.56) and closed out his afternoon with a third gold blazing a 22.17 in the 200 meter run.

“I made to state as a sophomore, and I’ve been wanting to get back,” Marshall said. “I’m glad I’m able to get that opportunity. I was coming out here to win, and every time I felt someone on my back I just ran harder.” 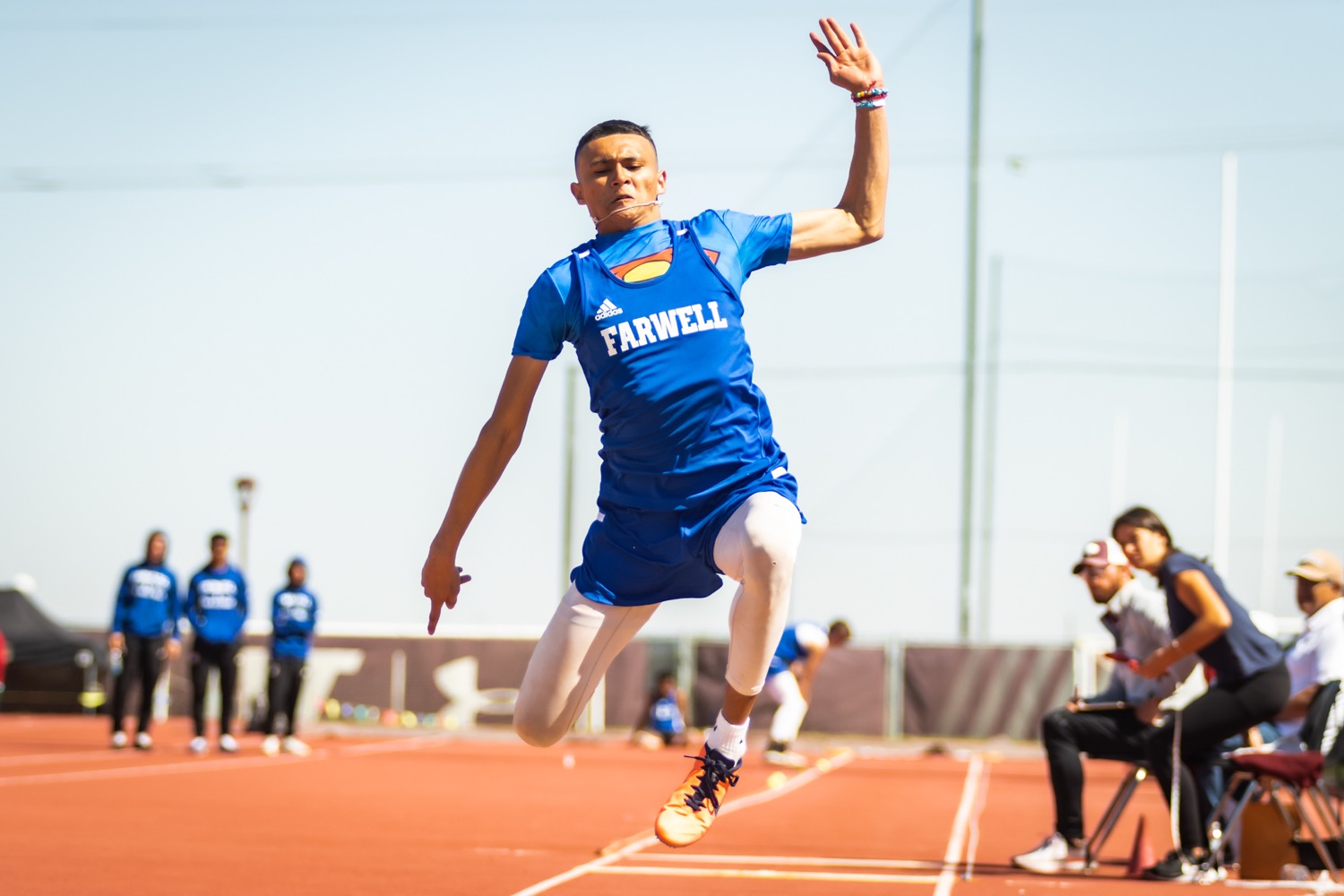 While Marshall did his damage on the track, Farwell’s Jonathan Mora did stole the show in the pits. On Friday Mora leaped 22-6 1/2 claiming his first gold medal in the long jump. But his thrilling triple jump Saturday morning is what will be remembered. Mora broke the school-record twice during the triple jump, and on his final attempt Mora popped off a 46-7 1/2 to win the event.

“It was having trouble getting on the board,” Mora said. “I was stressed a little in the long jump but was able to hit a big jump. In the triple jump, I was jumping good the entire time. This feeling is incredible.

The University Interscholastic League Class 2A state track meet is set for Friday, May 6, at Mike A. Myers Stadium in Austin.