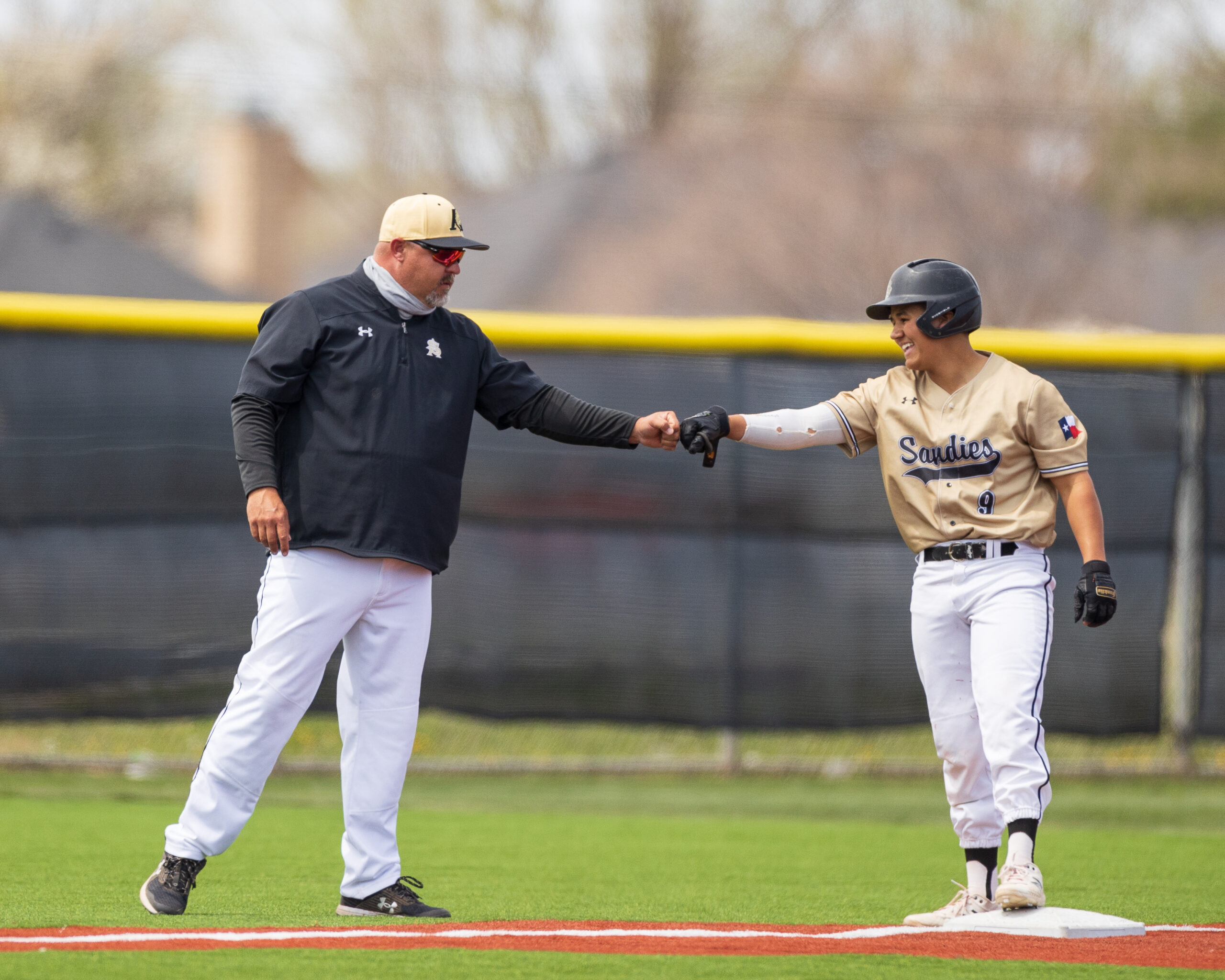 It’s no surprise it’s the one place he’s felt most at home.

“Pulling in that parking lot at Amarillo High it feels like driving on my street when I was a kid,” said Johnson, who graduated from AHS in 1998. “It just feels like home. I had that opportunity to know a lot of the history and tradition and the people who came before you. It’s amazing to have that chance and obviously it means a lot to me and I use that as motivation to get up every day and make sure that I bring it.”

Returning “home” has meant, maybe ironically, that Johnson is going further than he ever has in his coaching career.

When No. 6 Amarillo High (31-8) faces Aledo (29-9-2) in the Class 5A region final starting with game one of a best-of-three series at 7 p.m. Thursday at Midland’s Christensen Stadium, this will mark the furthest Johnson has gone in his high school playing or coaching career. It’s appropriate that he’s returning to one of the stops in his coaching career, where he was an assistant for Midland High’s perennially successful program, to continue his longest single-season coaching journey to date.

Johnson was in Midland between head coaching stops at Palo Duro and Lago Vista, before he returned to the Panhandle to take over at Bushland in 2015. In four seasons at Bushland, Johnson led the Falcons to the region semifinals twice before taking over the week after Jeff Timmons retired as Amarillo High’s head coach in 2018.

Timmons left in the midst of a prestigious run for the AHS program, beginning in 2016 when the Sandies reached the Class 6A state semifinals. That marked the first of five straight seasons where they went at least as far as the region semis (not counting 2020 when most of the season was wiped out due to COVID-19) and this is the third time in that span they reached the region final.

Johnson coached AHS to the region semis in his first season, but this is uncharted territory for him.

“There’s a realization there’s only eight teams in 5A left out there,” Johnson said. “We talk about that this thing’s a tournament and the idea is to be the last man standing in Region I and there’s just two of us. This weekend determines who is that Region I representative down there in Round Rock.

“I think the guys have a pretty good perspective of it. The big deal is we’ve got to come out ready to go because we don’t get any second chances with this deal.”

The Sandies have done what they needed to in order for Johnson keep coaching longer than he ever has during a season. They had to go to a third game in each of their first two series, routing Lubbock Monterey in the final two games of bidistrict after losing the first game 6-5.

Amarillo High had to go the distance to beat El Paso El Dorado in the area round the next week, sandwiching a pair 10-run mercy rule wins around a one-run loss. That 12-2 game three win over El Dorado began a current five-game postseason winning streak.

The Sandies have swept two straight series, eliminating No. 2 Lubbock Cooper in the region quarterfinals then sweeping Birdville 10-4 and 5-4 in the region semifinals.

AHS senior catcher Cayden Phillips has played for Johnson all three seasons. He thinks playoff success is a direct result of the preparation the team has put in between games under the coach.

“I think that with the intensity every time we come out to practice it’s a big deal,” Phillips said. “(Johnson’s) big thing is that we’re going to hit it hard but we’re not going to come out here and wear ourselves out. Everything we’re doing out here is for a purpose. I feel like every day we come out here for practice we’re getting ready for a game.”

Johnson has emphasized everybody on the roster knowing their roles and getting ready to fill them when the time comes to produce, and not merely paying attention to their own results.

“I don’t know that we have any words or anything that goes as a theme that we live by but it’s definitely that guy next to you, whether it’s on the bench or in the bus,” Johnson said. “I’ve got to pull my weight and hold on to the rope for that guy. These guys have really bought into that. Knowing that they have a teammate next to them and a guy they really care about and not letting them down has really motivated them throughout the year.”

The Sandies haven’t necessarily had the same lineup on the field for most of the season. Until the final two series of District 3-5A play, they were without senior shortstop Jake Maynard, who signed with TCU but had to sit out the beginning of the season after tearing his ACL during football season.

When Maynard was cleared by doctors to rejoin the team, Johnson immediately inserted him back at shortstop and the leadoff spot, positions which had been occupied for much of the season by senior Bryson Slaughter, another three-year letterman.

Slaughter adjusted by moving to third base and down to second in the order. As it turned out, he drove in the winning run in game two against Birdville last week.

“I think not only (Johnson) believing but everyone on the team believing in each other top to bottom is huge,” Slaughter said. “We all believe that each of us can do the job. When the game’s on the line we trust anyone and everyone in our lineup.”

The return of Maynard to the top of the lineup has given an already formidable lineup even more depth. It’s hard to find somebody to pitch around in the AHS lineup.

That was what Johnson was counting on as the season developed, along with a pitching staff whose confidence has only grown.

“It’s very rewarding to have a chance to still play in June,” Johnson said. “You try not to think too far ahead because as soon as you start thinking about somebody two weeks down the road your season’s about to end. I think that’s a great place where Amarillo High baseball is in the last decade.

“It’s hard to get here but there’s an expectation that we have an opportunity to do it. It takes a special group to do it and we’ve got that group this year.”

That process began when Johnson took over almost immediately after Timmons retired. The Sandies have stayed successful without breaking stride.

Phillips said Johnson was receptive to what players had to say from the beginning.

“In the first two weeks we were ready to go, Phillips said. “We had our old things we did and (Johnson) wanted to do those things and so we kind of mixed those together.”

It’s a recipe which has Amarillo High two wins away from the state tournament in Round Rock. That would only extend the longest trip Johnson has taken during a season, and give him a definite place in AHS tradition.

“It’s pretty special for me. I played in the 90s and watched so many games in the 80s and I have a front row seat to this.”