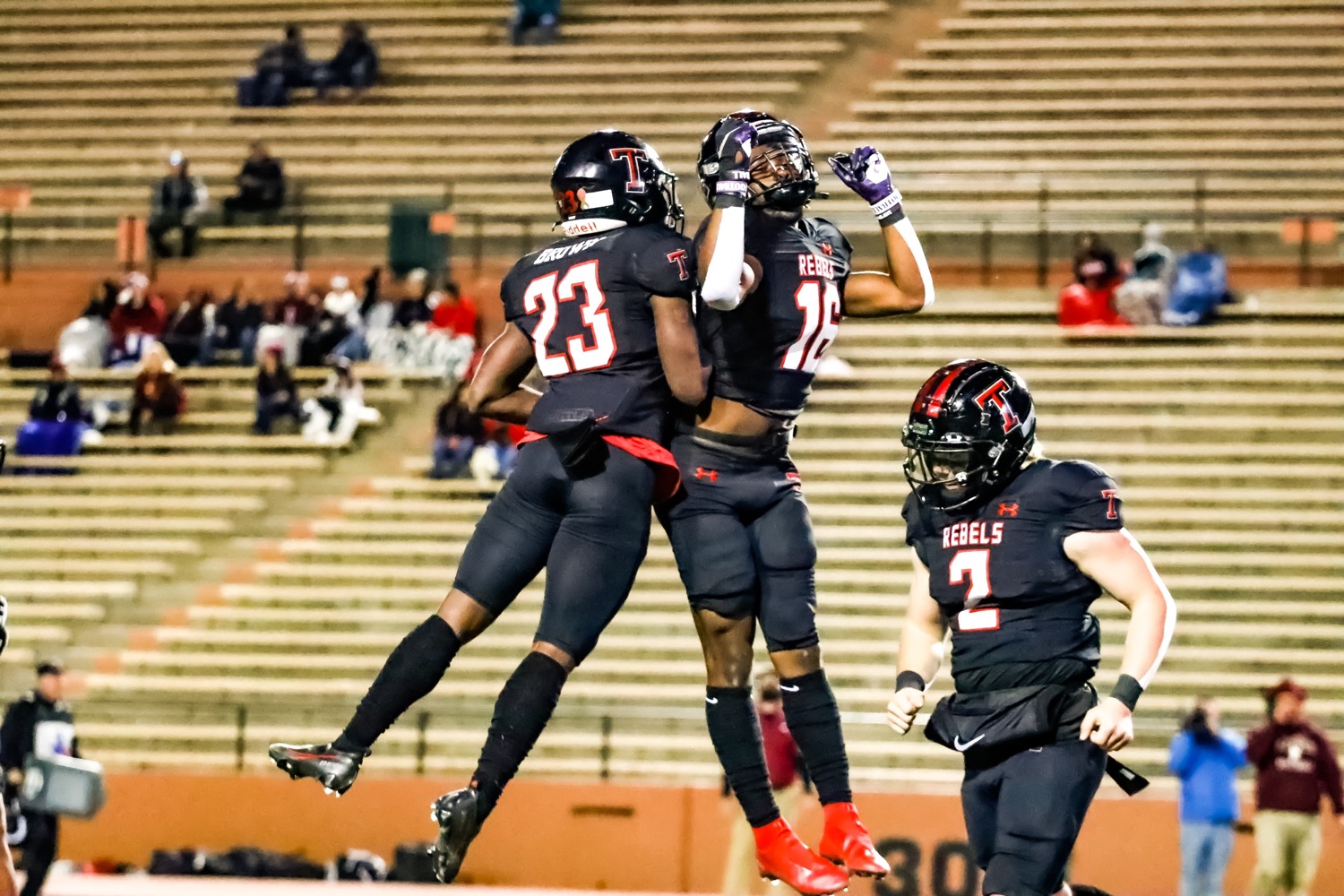 The Tascosa Rebels were committed to making a Major change offensively in their Class 5A Division I bidistrict playoff game against El Paso El Dorado at Dick Bivins Stadium on Friday night.Missing starting quarterback B.T. Daniel, due to a broken ankle suffered against Lubbock Coronado in the final game of the regular season eight days earlier, the Rebels figured to have a far different look than they had over the previous three seasons in the playoffs. But the results were exactly the same.

Major Everhart took over at quarterback and made in impact literally from the start and for the fourth straight season, the Rebels won their fourth straight first round playoff game, crushing El Dorado 53-7. Tascosa will face Burleson Centennial in next week’s area round.

The victory looked a lot like those previous four first round wins by the Rebels (9-2) and their other wins deeper into the playoffs. They made sure it was business as usual against El Dorado (4-7).

“We did jump out quick and play well but we hit a big lull a lot because of (El Dorado),” Tascosa coach Ken Plunk said. “They were difficult to defend running the football but once we pulled away it got a little easier to defend them because they had to throw it so much. To me it was still a very tense game until about late in the third quarter.”

The Rebels showed how adaptable they were right off the bat. They just put the ball in Everhart’s hands to do most of the damage offensively as they were never in any serious trouble.

Tascosa forced a punt by El Dorado on the first possession after the opening kickoff and took over at its own 15-yard line. On the first play from scrimmage Everhart, starting the game at quarterback, kept the ball on an option and raced 85 yards for a touchdown for a 7-0 lead.

“I got my feet wet for the first time and getting that touchdown the first time I touched the ball definitely relaxed me and let me play my game,” said Everhart, who ran for 229 yards and two touchdowns on 14 carries. “We want to get one game at a time and get moving forward to get these gold balls.”

That was a taste of the damage Everhart can do to a defense. He also scored on a 55-yard run on the first play of the second quarter to make it 21-0.

It showed that on this night, at least, Tascosa could more than get by without Daniel running the option.

“We’re sick about losing B.T.,” Plunk said. “We had to put the best combination out there we’ve got without B.T. I’m proud of B.T. for getting us here, I’m proud of Major and proud of the entire team.”

Everhart’s runs were really the only two big plays in the first half for either team. Tascosa shut down El Dorado for the most part defensively, and held the Aztecs to 187 total yards for the game.

Statistically it was a prototypical Tascosa postseason game offensively, in the that Rebels were one-dimensional but ran that dimension to near perfection. All of their 469 yards of offense came on the ground as they threw the ball only twice, on a pair of incompletions by Javen Patrick, who still capped the scoring for Tascosa on a 7-yard run midway through the fourth quarter.

Tascosa had a pair of 100-yard rushers, as L’Travion Brown ran for 109 yards and two touchdowns on only seven carries. Brown scored on a 17-yard run in between Everhart’s two first half scores and on a 46-yard run early in the fourth quarter.

It just proved how dominant the Rebels were up front.

“Being out there at QB for the first time I definitely see how good our line is,” said Everhart, who has verbally committed to TCU and says he’s sticking with it despite the school dismissing head coach Gary Patterson.

El Dorado did put together a scoring drive midway through the second quarter, as quarterback Quincy Estrada kept the ball for a 4-yard score to make it 21-7 at halftime. But that’s as good as it got for the Aztecs.

Tascosa effectively put the game away during a 69-second span midway through the third quarter. Jayden Whiteside took a pitch and scampered 21 yards for a touchdown, then after the Rebels forced a three-and-out, Everhart returned the ensuing punt 57 yards for a score to make it 34-7 and all but ensure a trip to the area round.

The win encapsulated what has made the Rebels successful at this point in the season for the last four years, something El Dorado became the latest team to discover.

“We run well, play good defense and play super hard,” Plunk said. “When we don’t get in our own way like we last week and turn it over and have some mental breakdowns, we can play as a team. We didn’t play as a team last week and all kind of separated. This week we played as a team.”

Tascosa lost at Coronado 48-29 last week and had to settle for the No. 2 seed out of District 2-5A Division I. The memory of that was erased against El Dorado.

“It didn’t have an effect, although it was hard on me to be honest,” Plunk said. “I didn’t think the team that played last week even existed. We moved on and now we’re going to try to accomplish as many goals as we possibly can.” Tascosa 53, El Dorado 7

Going on the road to open the playoffs didn’t faze Amarillo High, as the Sandies overcame an early score by El Paso Del Valle to roll to a 45-21 victory.

Del Valle got on the board first to take a 7-0 lead at the end of the first quarter, but it was all Amarillo High (9-2) after that.

The Sandies scored 38 unanswered points in the second and third quarters to take control of the game. They were effective rushing ball, picking up 206 yards on the ground, highlighted by Levi Slaydon’s 95-yard scoring run.

Amarillo ISD came within two points of pulling off a bidistrict sweep of El Paso schools, as Caprock fell to El Paso Chapin in heartbreaking fashion. Chapin scored on a late two-point conversion to pull off a 29-28 victory and end Caprock’s season with a 4-7 mark. 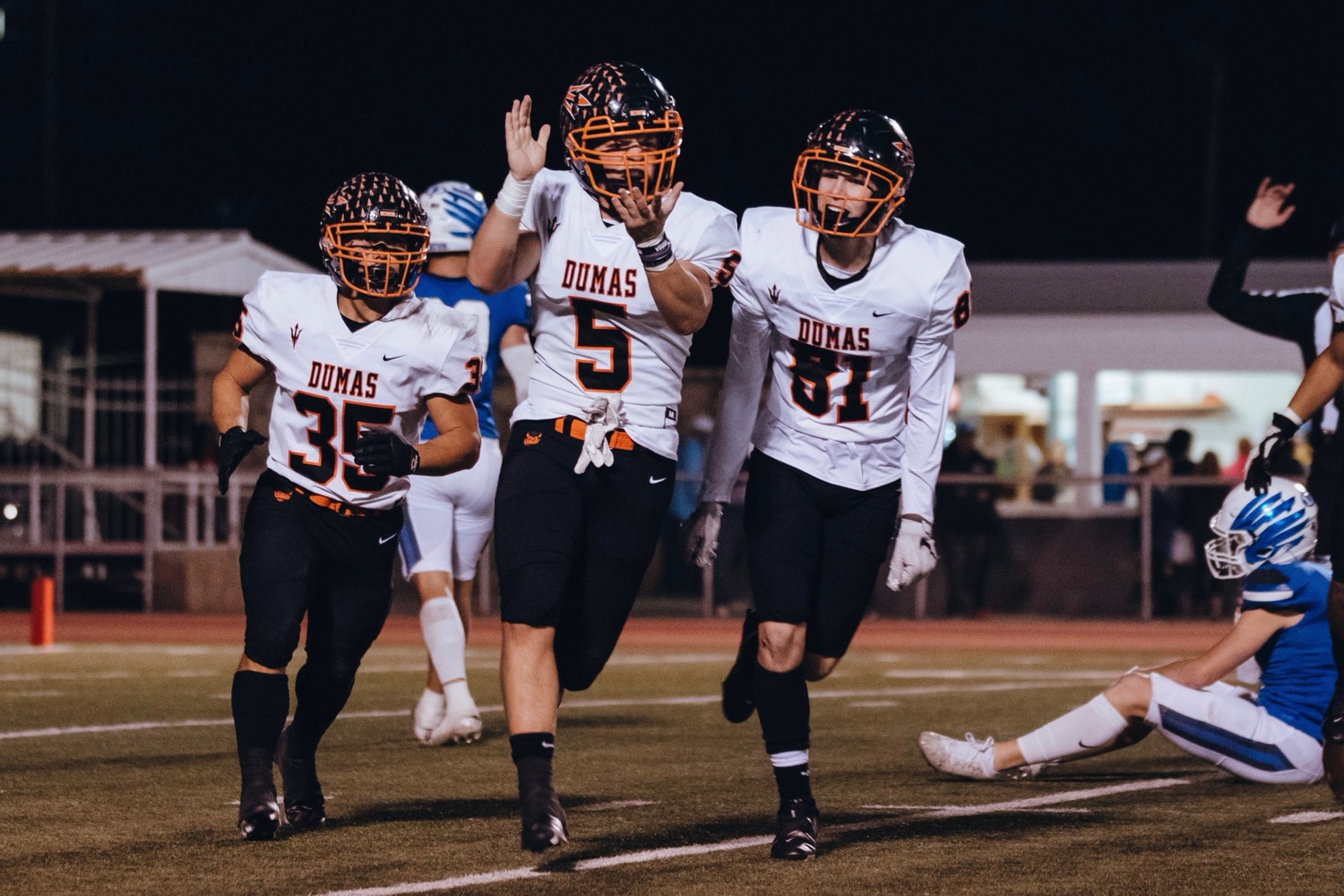 Cannon Speck (5) celebrates after a big play against Decatur during a Class 4A Division bidistrict game Friday at Fair Park Stadium in Childress. [Elisa Chavez/ For Press Pass Sports]

Class 4A Division I

The Dumas Demons gave the Decatur Eagles a big head start at Fair Park Stadium in Childress, but they came up with a big finish to advance.

Decatur scored the first 17 points of the game to put Dumas in a serious hole, but the Demons took control of the game by responding with 30 unanswered points and rolled to a 45-24 victory, assuring themselves a playoff win for the third straight season.

The Eagles soared to a 17-0 lead in the first quarter as Preston Boggs threw two touchdowns to put Decatur on top. But it was all Dumas after that.

Dumas (8-2) took the lead for good when quarterback Brayden Boggs-Rushing scored on a 5-yard run with 20 seconds left in the first half to give the Demons a 23-17 halftime lead. Boggs-Rushing ran for 129 yards and two touchdowns on 14 carries and also threw two touchdown passes.

In a rematch of last year’s state quarterfinal game, Springtown got some major revenge on Canyon, breaking an early tie in the second quarter by scoring 28 unanswered points to hand the Eagles a 49-13 defeat at Snyder to end their season.

After a scoreless first quarter, Springtown took a 7-0 lead before Canyon (8-3) answered back with a 61-yard scoring run by Dario Bressler to tie it 7-7. Bressler had a huge game with 206 yards on 21 carries and also caught a touchdown pass from Derrek Clements in the third quarter, but in between there was little for the Eagles to celebrate.

Springtown’s Porcupines (8-3) punctured Canyon’s defense with 319 yards rushing and had three runners with at least 86 yards. The Eagles didn’t help themselves by committing four turnovers.

It was a rough ending to the season for Pampa, as the Harvesters never got untracked offensively and fell to Wichita Falls Hirschi 42-10 at Wolfforth Frenship, closing out their season with four straight losses.

The issues of youth and injury which had plagued Pampa (6-5) since district play started were on display against Hirschi (9-2). Pampa fell behind 15-0 before Erick Hernandez got the Harvesters on the board with a field goal late in the first half.

That was all the Harvesters could manage until Michael Campos threw a touchdown pass to Jessie Alvidrez in the fourth quarter. Pampa had to play without quarterback Sam Anguiano, who suffered a leg injury in the previous week’s game against Dumas to end the regular season.

Hereford falls to Lake Worth

Hereford’s season came to an end as the Whitefaces lost to Lake Worth 34-20 at Vernon. The Herd finished the season 6-5 while Lake Worth is now 9-2.

Perryton gave up an early touchdown, but took the lead in the second quarter and dominated the rest of the way to beat Midland Greenwood 35-19 at Plainview.

The Rangers (4-7) trailed 7-0 at the end of the first quarter before tying it on a 4-yard run by Isaias Dominguez early in the second quarter. Dominguez then gave Perryton the lead for good on a 73-yard run which was the biggest play en route to a 21-13 halftime lead.

Dominguez had a huge game with 229 yards and three touchdowns on 22 carries. Abraham Hernandez threw two touchdown passes for Perryton, who plays Celina next Friday at Iowa Park at 7:30 p.m.

In the other game involving an area school from District 2-4A Division II Borger fell hard to Sweetwater 50-15 at Lubbock Cooper. Borger finished the season 3-8.