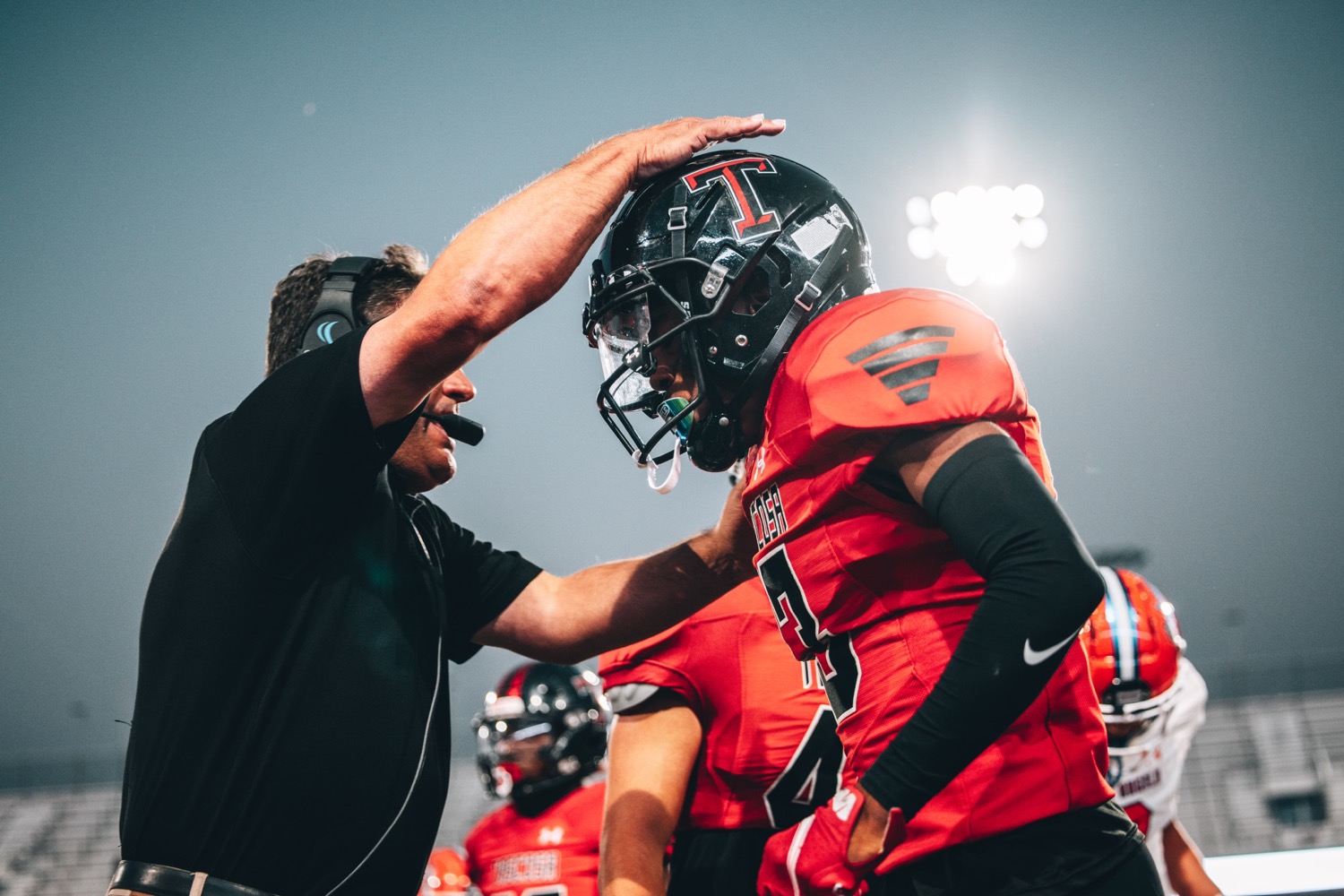 1. Will there be a long playoff run in 5A

Four Amarillo-area Class 5A teams open the playoffs this weekend with dreams of a long playoff run.

Are the dreams a reality for Tascosa, Caprock and Amarillo High in 5A-DI? How about Randall in 5A-DII?

All four teams have questions marks and tough roads ahead due to injuries, the side of the bracket they fell into, and recent history.

Randall (5-5) is Randall when it comes to the playoffs under coach Gaylon Selman.

Recently the Raiders always seem to be a third round playoff team no matter their record or the opponent. However, Randall rides in with a three-game losing streak. Electrifying QB Braxton Burd missing last week’s game (concussion protocol), and will be on the road in bidistrict contest at No. 1 seed out of an average Fort Worth district in pass-happy O.D. Wyatt (7-3).

It’s all about El Paso with Caprock, AHS and Tascosa.

The Rebs have been a top 10 team all year until last week when their foundation took a hit losing at Lubbock Coronado, losing starting QB BT Daniel (broken leg) for the season, and losing the No. 1 district seed.

Although The Rebs (8-2) will have to go with D-I running back Major Everhart at QB, that’s not a bad thing when the best athlete on the field touches the ball every play. EP El Dorado (4-6) in bidistrict should be no prob, as with Justin Northwest (7-3) or Burleson (4-6) in area. Things change in round three for Tascosa with AHS or Colleyville Heritage (9-1) the likely foe. But Tascosa can play some wicked D and remains the favorite in this region.

Caprock (4-6) and AHS already have things stirred up because of the Harris Ratings.

The No. 4 district seed Caprock is listed as a 9-point favorite over No. 1 district seed El Paso Chapin (8-2) in bidistrict. Respect earned with coach Dan Sherwood’s troops running the ball like crazy.

No. 3 district seed AHS is a 23 point underdog by Harris to El Paso Del Valle (7-3), a looney tune number in my opinion. But it’s out there. What’s out there for Caprock and AHS in round two is likely Azle (8-2) for The Rock and Colleyville Heritage (9-1) for AHS. Wins in the area would be upsets. — Lance Lahnert 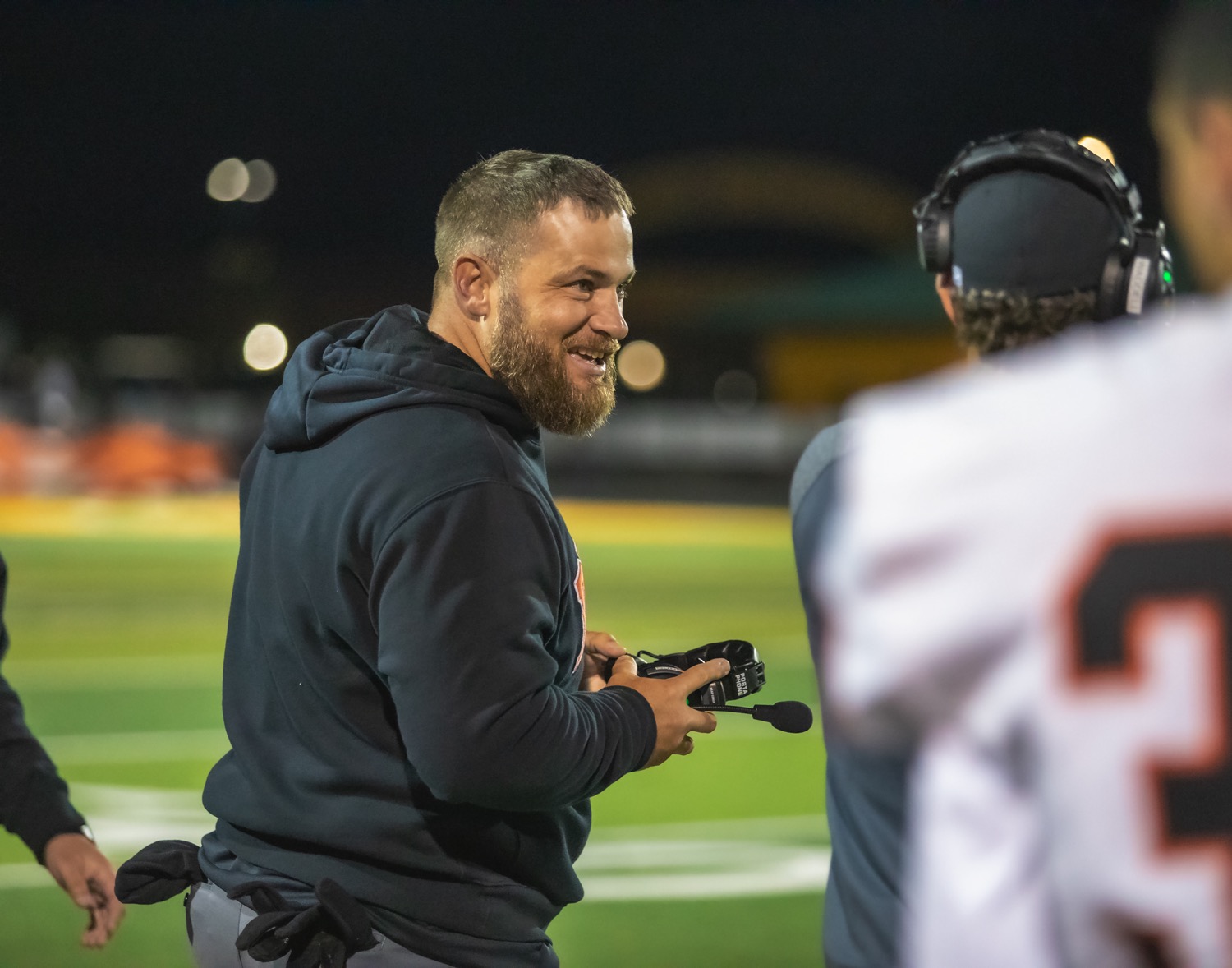 2. Will Dumas or Canyon make another charge

Once again the Region I is stacked when it comes to Class 4A Division I. Especially when District 2-4A and 3-4A crossover in very competitive opening round playoff matchups, which have a much more feel of a third round playoff vibe. Dumas and Canyon are strong contenders in the region once again. The Demons (7-2) claimed a fifth straight outright district title last week, and under head coach Aaron Dunnam, have won five playoff games over the past two seasons. Dumas will have its handsfull in an opening round matchup with Decatur, which is a better team than its 4-6 record.

Under first-year coach Todd Winfrey, Canyon hopes for another magical run to the state semfinals like they did last season. The Eagles (8-2) face a very strong challenge against a familiar foe in Springtown (7-3). Canyon knocked off the Porcupines, 17-7, in last years state quarterfinals.

Watch out for District 2-4A champion and No. 7-ranked Wichita Falls Hirschi. The Huskies (10-0) are stacked, and are the regional favorite entering the playoffs. 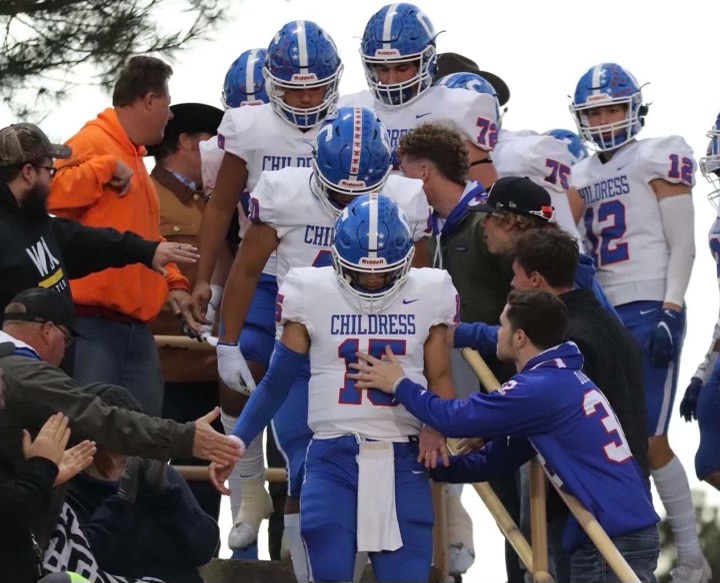 The No. 3-ranked Childress Bobcats open the Class 3A Division II playoffs against Stanton in a bi-district game at 7 p.m. Thursday in Floydada. [Kamryn Moya/ For Press Pass Sports]

3. Is this the year for Childress

Childress completed its first unbeaten season in 31 years, and enters a loaded Class 3A Division II as the favorites in Region I that boasts three teams ranked in the top 10.

The No. 3-ranked Bobcats (9-0) have quality wins under their belt in Shallowater, Friona, and Canadian.

With a solid defense, and an offense mastered by quarterback Collin Bishop — who has thrown for 2,428 yards 23 touchdowns without an interception, while rushing for 707 rush yards with 17 more TDs — the Bobcats have all the intangibles for a deep run into December.

Though Canadian (7-3) has struggled of late no way can anyone overlook a Wildcat team that’s kept a firm grasp on this region making seven straight trips to the state semifinals, and are the reigning state champions.

On the South Plains, No. 6 Lubbock Roosevelt (10-0), the District 4-3A champions, are having its best season in 30 plus years. If it plays out how it should the Eagles will get a massive contest with Childress in the third round on Thanksgiving weekend.

The game to watch in this opening round will no doubt be No. 9 Abernathy (9-1) against Friona at 7 p.m. Friday in Muleshoe. The Chieftains (8-2) only two losses come by way of Childress and Canadian by a combined 13 points. 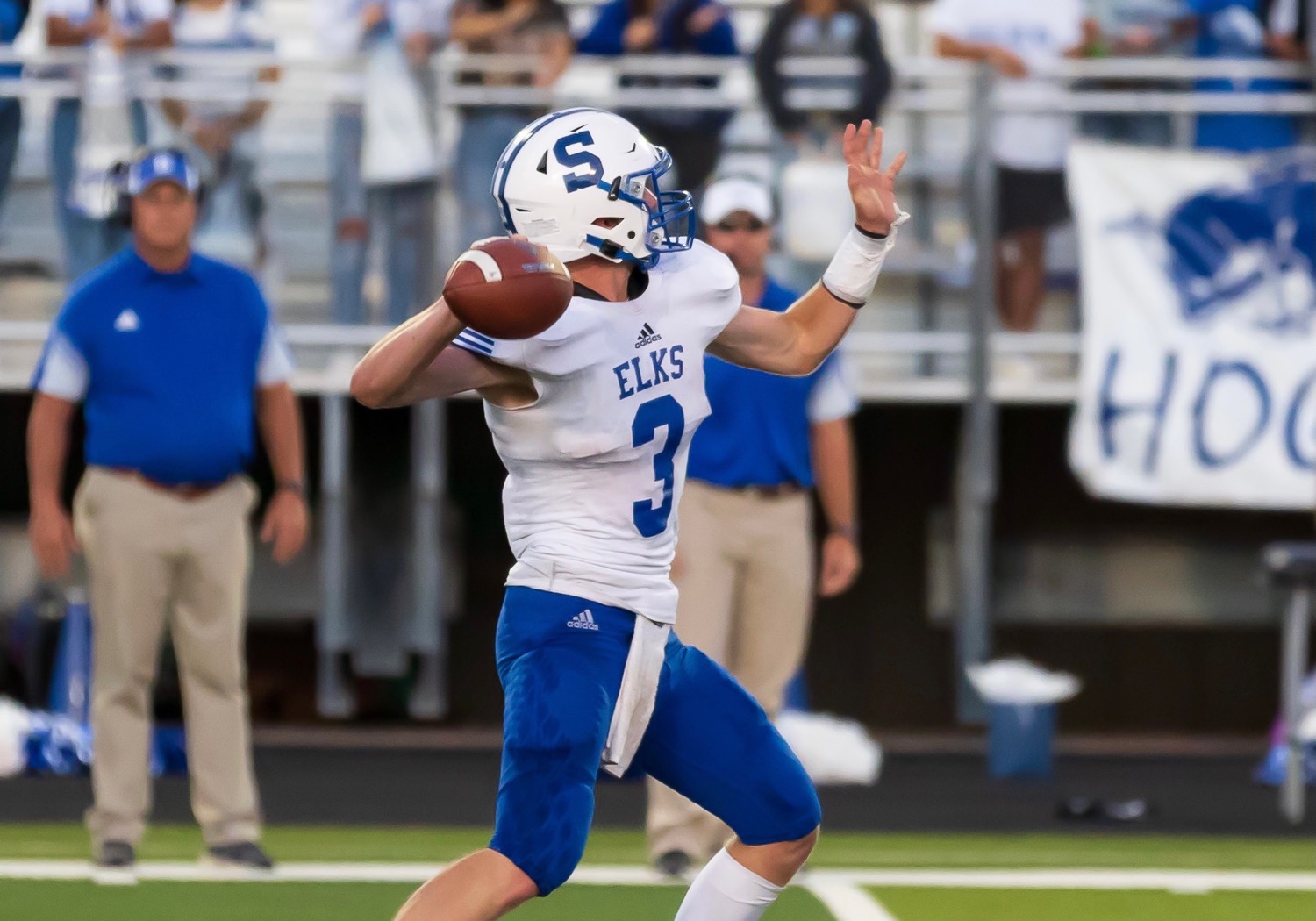 4. Who’s coming out of 2A Division II

This is the Texas Panhandle’s most dominant region. Wink and McCamey may have something to say about it, but it’s hard to deny with three Amarillo-area teams ranked in the top 10.

Stratford is a legit contender. The Elks (9-1) have run over everyone in their path, and do it with a tremendous defense. District 4-2A Division II champion Clarendon (9-1) have made noise by beating Wellington during the district season. As for the No. 9-ranked Skyrockets, Wellington (6-3) can’t be overlooked by any means, especially with talented two-way star Marc Ramirez lining up on both sides of the ball. The Skyrockets will get a huge test against talented Vega (7-3) in Friday’s opening round. Upstart teams like Gruver (8-1) and Shamrock (7-3) are also no slouches. The Greyhounds and Irish meet Friday night in what should be a great first round matchup. 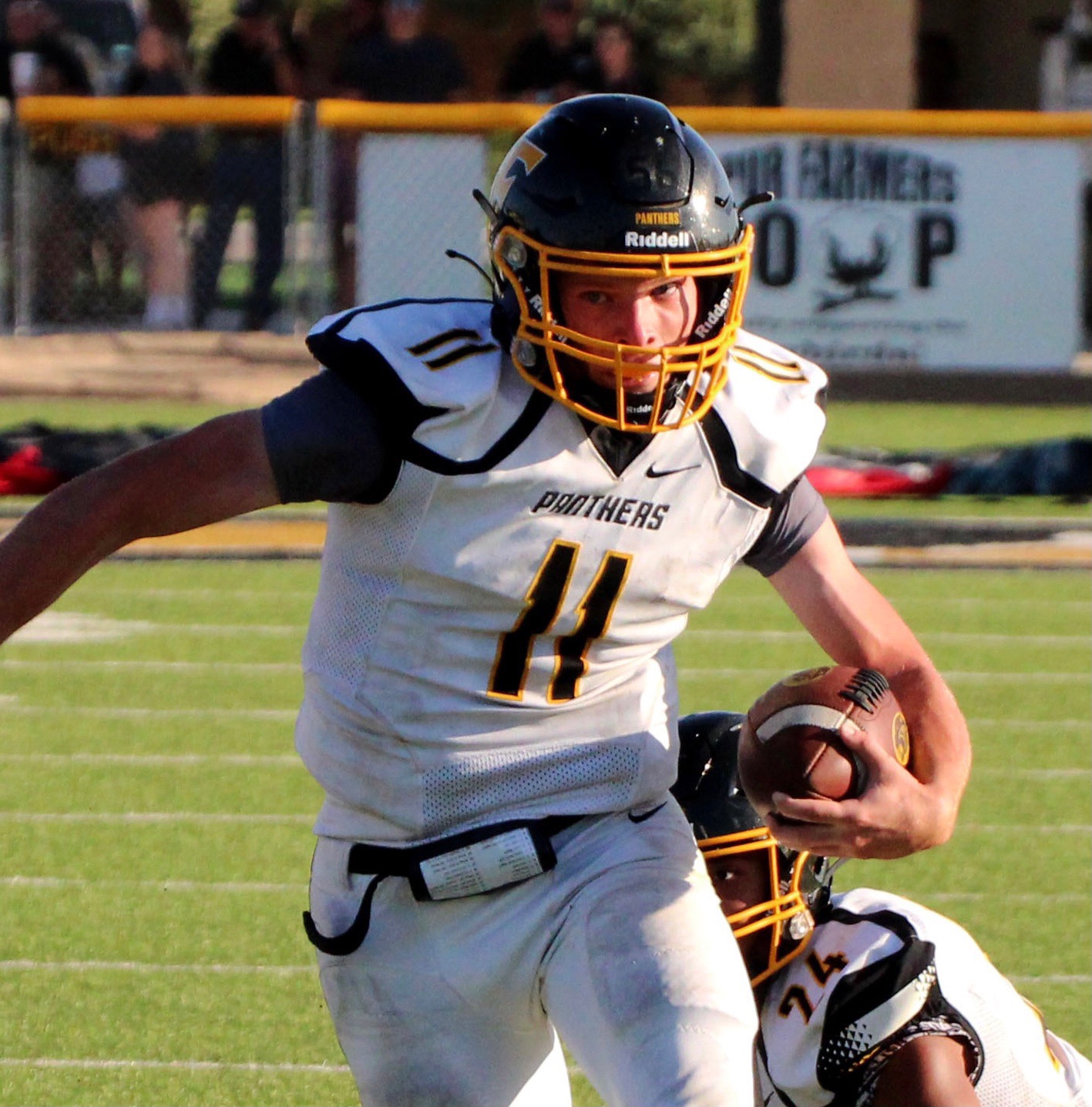 Follett’s Shayne Franks looks for running room during a game earlier this season. [Photo by Texas 1A Fan]

5. Are Earth and Follett destined for deep runs

All season long No. 9 Springlake-Earth has been the favorite in Region I, and that still holds true. However, several teams have emerged as contenders to upset the Wolverines. Happy (7-3), making their ninth appearance in the playoffs in the last ten years, will be looking to avenge an early season 68-36 loss to the Wolverines (8-1) in bi-district action. Perennial power Borden County (5-5) likely looms as a regional quarterfinal matchup if they get by Happy. On the other side of the bracket, Valley (7-3) and Nazareth (7-3) square off in a rematch that the Swifts won 30-28 the first time around. Both teams have improved greatly that time and the winner will be a tough out. A regional quarterfinal matchup with No. 8 Spur will await the winner. The Bulldogs have the kind of speed that neither team has faced all year and will be tough to slow down.

Five of the top ten teams in the state reside in Region I led by No. 6 Follett. The Panthers (10-0) will need to beat Wildorado a second time to likely face No. 7 Anton in a rematch of last year’s regional quarterfinal round game won by Follett 44-43. The Panthers, led by Jr. spread back Shayne Franks, will be a tough out in this region. No. 8 Whitharral, coached by former McLean head man Clint Linman, and No. 10 Klondike face each other in round one with the winner getting No. 9 Groom or upstart Miami. The Tigers beat a sophomore laden Warriors team 70-58 in Week 6. Stephen Kuehler, the junior spread back for the Tigers, is a true dual-threat for coach Tony Dodson’s squad. A Follett-Groom rematch in the Regional Finals is not out of the question, but both teams will be severely tested before they get there.