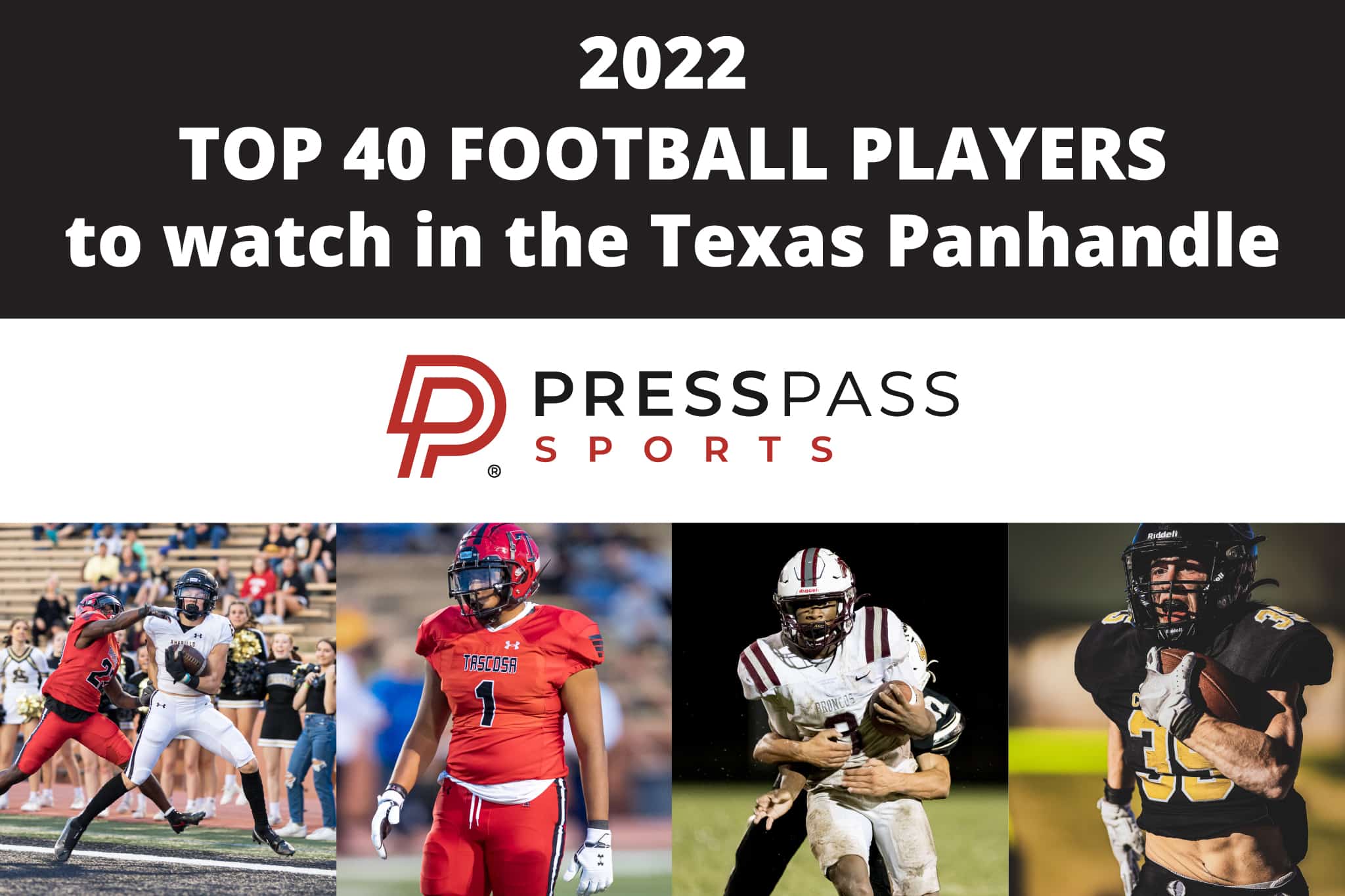 The regular season kickoffs on Aug. 25, as teams across the Amarillo-area gear up for an exciting 2022 campaign. Here’s 40 football players to watch that will make a major impact in the Texas Panhandle.

Thanks to another outstanding season, not to mention his impressive 6-foot-5, 250-pound stature, Carter dominated opponents with his strength and his ability to rush the passer. Carter totaled 66 tackles, 34 of those solo tackles with an eye-opening nine sacks in 2021. Carter also announced this summer out of his 15 Division I offers, he has committed to play his college football at TCU.

A speedy third-year varsity receiver who has gotten attention from multiple Division I schools, Garcia was a first-team District 2-5A Division I selection, establishing himself as a big play threat with 54 catches for 885 yards and 10 touchdowns.

Speed, speed, and more speed. Davis is a nightmare for opponents with his ability to get the corner and breakaway at any given moment. The Texas Tech commit is hoping to capitalize on a season that saw him rush for 790 yards with nine touchdowns, and rack up 378 receiving yards with another five TDs. Coming off the edge on defense, Davis can easily get to a quarterback making eight sacks last year on top of 94 tackles.

It was a breakout season for the lightning quick junior, who was a part of a Childress team that celebrated its first undefeated regular season in 30 years. Nickleberry will be the primary focus in the offense but will do his best to top his 56 catches for 883 yards and 16 touchdowns from a year ago.

The reigning District 1-2A Division I MVP did everything for the Panthers last season throwing for 1,578 yards with 13 touchdowns, rushing for 1,603 yards and 31 touchdowns, as well as 46 tackles with two interceptions on defense. Through his career, Hack has amassed 4,063 rushing yards, 2,384 passing yards with a combined 98 touchdowns.

While Brown is a two-way standout, he made his biggest impact on defense for the Dons, Brown led an improved defense with 61 tackles, including 11 for losses with three forced fumbles and showed game-changing ability with three defensive touchdowns.

Burr was a bulldozer any time he touched the football. Burr totaled 1,297 yards on the ground with 24 TDs. But it was on the defensive side where Burr really stood out. The Class 2A Defensive Player of the Year was in on 157 tackles with four sacks.

Barnes is the latest speedy two-way threat who can be a game-changer on both sides of the ball. Offensively he was good for more than 10 yards a pop with 438 yards and five touchdowns on just 37 carries, and on defense he made 47 tackles with nine for losses and also scored a touchdown.

Not only is Ibanez a two-time All-District cornerback that made 51 tackles with 10 pass breakups as a junior last season, but the now senior takes over on the offense side as the new quarterback for the Demons shifting into a very pivotal role for head coach Aaron Dunnam.

Lewis has been the captain of the defense and the Longhorns over the past two seasons. The three-year starter has even more expectations heading into 2022. Last year, Lewis, a hard-hitting defensive back, had 72 tackles, 42 of those solo tackles.

Even with his season bitten by the injury bug anyone that saw Flowers play can see this is going to be one of the premiere players heading into the 2022 season. Flowers missed most of district a year ago but was still able to rack up 1,186 rushing yards with 14 touchdowns, and snag 24 catches for 415 yards with two more TDs.

The three-year starter has put on 20 pounds from last season and is ready to run over anyone in his way. Stancell has made quite the name for himself out west after piling up an impressive 2,155 yards rushing to go with 36 touchdowns in 2021.

Torres put himself on the map with an explosive junior season. Defensive backs struggled covering the shifty receiver as Torres torched defenders for 1,001 yards on 67 catches with 13 touchdowns.

Baker is a dual threat for the Raiders offensively, as he’s their leading returning receiver with 48 catches for 708 yards last season. He also ran for 155 yards on 31 carries and scored a total of 10 touchdowns.

The sure-handed receiver became a go-to weapon as the season progressed for Bushland last season pulling down 64 balls for 684 yards with six touchdowns. This high-flying Falcons offense will have an even bigger expectation of King this year.

Pipkin earned All-State honors thanks to his frame and ability to play both sides of the football. He can block on offense, and make catches when called upon, and on defense Pipkin is a solid of a linebacker as they come making 112 tackles a year ago.

Cash will prove very valuable to the Eagles defensively, as he was a tackling machine last season with 120 tackles, including 91 solo, with 15 for losses along with two pass breakups.

Gonzales leads the Whitefaces in the secondary after making 45 tackles and two interceptions last season as a cover man while being a hard hitter playing against the run. He also plays receiver on offense.

With his 295-pound frame, Jones has the ability to push around a defender and protect his QB. The extremely strong senior graded out at 92 percent last year, had 60 pancake blocks, and didn’t allow a sack.

Greeson is Amarillo High’s leading returning tackler with 98 tackles last season including seven for losses along with a sack, an interception and a fumble recovery.

Head coach Greg Proffitt is fortunate to have a veteran line returning led by Ray Ramirez. The All-State selection provides stability up front for an offense that can chew up yards, and on defense can plug the gaps making 76 tackles with four sacks.

Segovia is a versatile athlete that is dangerous at whatever position he’s put on the field. Though he’s making the move to QB this year, defenses will have to be on their toes. Segovia can blister a defense with speed rushing for 710 yards last season with eight touchdowns.

Ledoux should have plenty of opportunities to make plays as offenses will be preoccupied with Avion Carter up front. Last year, Ledoux had 77 tackles and four sacks for the Rebels and should be better this year.

Perkins carried a big load both ways for the Wildcats, earning District 1-3A Division I first team honors on defense with 75 tackles and five sacks at defensive end. Offensively at tight end, he was a strong blocker for a run-oriented attack.

The two-way lineman is a veteran leader for the Rangers up front. Last season, Chacon first-team All-District center, and a second-team All-State defensive lineman selection ending the year with 77 tackles and five sacks.

The reigning District 3-4A Division I Newcomer of the Year helps solidify an outstanding Dumas defense. Tovar has the size and quickness that showed last season with an incredible 11 sacks on 54 tackles, and a forced fumble.

The four-year starter heads up a very talented offensive line for the Wildcats. Throgmorton has been a mainstay on varsity since his freshman season playing in 40 games with 29 starts over his four years.

Clements wants to make major strides from his junior year to this senior season. He’s big, he’s fast, and can sling it. During the 2021 campaign Clements threw for 1,951 yards, ran for 406 yards, totaling 20 touchdowns.

The speedy back helped the Greyhounds go in a much-improved 2021 year under second-year head coach, Lee Brandon. Heading into year three of the program, expect Holland’s role to be even bigger. As a junior Holland stacked up 689 rushing yards.

Macina was a dual threat behind center in leading Shamrock to the playoffs, throwing for 1,294 yards and 14 touchdowns while running for 987 yards with 13 touchdowns.

Lujan had a phenomenal freshman season for the Bobcats, throwing for 2,284 yards and 25 touchdowns, along with 424 rushing yards and eight touchdowns. Expect to see a sensational sophomore year.

Before going to the state meet in track last May, the speedy Freeman ran for 1,003 yards and 12 touchdowns for the Eagles while also using his speed as a starter in the secondary on defense.

Though he could see time at quarterback, Taylor is also a valuable wide receiver that could keep defensive backs away from Lamont Nickleberry on the other side. Taylor had a big junior season snagging 34 passes for 556 yards with a pair of scores. He also made 48 tackles with two picks on defense.

Graduation took a toll on the Chieftains backfield but fortunately Friona does return one key weapon in Bautista. The senior took advantage of every carry last season chewing up 858 yards on the ground with 12 TDs.

It’s only August but get used to hearing the name Charly Pitt. The two-way lineman will make his presence known for the Falcons, especially when it comes to his defensive play. Last season Pitt played well as a sophomore making 54 tackles with four sacks.

Braden provides another huge weapon for his younger brother, Bryce, who moves into the quarterback role, and helps solidify a very stingy Stratford defense. At the tight end position, Braden had 407 yards receiving with four touchdowns for the defending state champions. On the defensive side, the linebacker sniffed out 74 tackles with four interceptions.

DeLaRosa has been a staple for the Mustangs over his standout career. Now a senior, even more is expected from the two-way standout. On the offensive side of the ball, the versatile DeLaRosa neared a 1,000-yards rushing with seven touchdowns. On defense, he was in on a team-best 123 tackles and was named the District 2-3A Division II Defensive Player of the Year.

Will serve as a fast complement to Garcia in what should be a prolific passing game for the Sandies, as he had 28 receptions for 287 yards and a touchdown. Haelzle, an all-around athlete, also threw a touchdown pass.

Clements figures to anchor Borger’s defense at linebacker, as he returns after making 108 tackles, including seven for losses along with two sacks and an interception.